James Brown, (born May 3, 1933, Barnwell, South Carolina, U.S.—died December 25, 2006, Atlanta, Georgia), American singer, songwriter, arranger, and dancer, who was one of the most important and influential entertainers in 20th-century popular music and whose remarkable achievements earned him the sobriquet “the Hardest-Working Man in Show Business.”

Brown was raised mainly in Augusta, Georgia, by his great-aunt, who took him in at about the age of five when his parents divorced. Growing up in the segregated South during the Great Depression of the 1930s, Brown was so impoverished that he was sent home from grade school for “insufficient clothes,” an experience that he never forgot and that perhaps explains his penchant as an adult for wearing ermine coats, velour jumpsuits, elaborate capes, and conspicuous gold jewelry. Neighbors taught him how to play drums, piano, and guitar, and he learned about gospel music in churches and at tent revivals, where preachers would scream, yell, stomp their feet, and fall to their knees during sermons to provoke responses from the congregation. Brown sang for his classmates and competed in local talent shows but initially thought more about a career in baseball or boxing than in music.

At age 15 Brown and some companions were arrested while breaking into cars. He was sentenced to 8 to 16 years of incarceration but was released after 3 years for good behavior. While at the Alto Reform School, he formed a gospel group. Subsequently secularized and renamed the Flames (later the Famous Flames), it soon attracted the attention of rhythm-and-blues and rock-and-roll shouter Little Richard, whose manager helped promote the group. Intrigued by their demo record, Ralph Bass, the artists-and-repertoire man for the King label, brought the group to Cincinnati, Ohio, to record for King Records’s subsidiary Federal. The label’s owner, Syd Nathan, hated Brown’s first recording, “Please, Please, Please” (1956), but the record eventually sold three million copies and launched Brown’s extraordinary career. Along with placing nearly 100 singles and almost 50 albums on the best-seller charts, Brown broke new ground with two of the first successful “live and in concert” albums—his landmark Live at the Apollo (1963), which stayed on the charts for 66 weeks, and his 1964 follow-up, Pure Dynamite! Live at the Royal, which charted for 22 weeks.

During the 1960s Brown was known as “Soul Brother Number One.” His hit recordings of that decade have often been associated with the emergence of the Black Arts and black nationalist movements, especially the songs “Say It Loud—I’m Black and I’m Proud” (1968), “Don’t Be a Drop-Out” (1966), and “I Don’t Want Nobody to Give Me Nothin’ (Open Up the Door, I’ll Get It Myself)” (1969). Politicians recruited him to help calm cities struck by civil insurrection and avidly courted his endorsement. In the 1970s Brown became “the Godfather of

Soul,” and his hit songs stimulated several dance crazes and were featured on the soundtracks of a number of “blaxploitation” films (sensational, low-budget, action-oriented motion pictures with African American protagonists). When hip-hop emerged as a viable commercial music in the 1980s, Brown’s songs again assumed center stage as hip-hop disc jockeys frequently incorporated samples (audio snippets) from his records. He also appeared in several motion pictures, including The Blues Brothers (1980) and Rocky IV (1985), and attained global status as a celebrity, especially in Africa, where his tours attracted enormous crowds and generated a broad range of new musical fusions. Yet Brown’s life continued to be marked by difficulties, including the tragic death of his third wife, charges of drug use, and a period of imprisonment for a 1988 high-speed highway chase in which he tried to escape pursuing police officers. 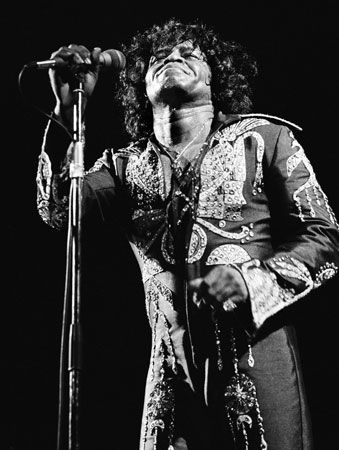 Brown’s uncanny ability to “scream” on key, to sing soulful slow ballads as well as electrifying up-tempo tunes, to plumb the rhythmic possibilities of the human voice and instrumental accompaniment, and to blend blues, gospel, jazz, and country vocal styles together made him one of the most influential vocalists of the 20th century. His extraordinary dance routines featuring deft deployment of microphones and articles of clothing as props, acrobatic leaps, full-impact knee landings, complex rhythmic patterns, dazzling footwork, dramatic entrances, and melodramatic exits redefined public performance within popular music and inspired generations of imitators (not least Michael Jackson). His careful attention to every aspect of his shows, from arranging songs to supervising sidemen, from negotiating performance fees to selecting costumes, guaranteed his audiences a uniformly high level of professionalism every night and established a precedent in artistic autonomy. In the course of an extremely successful commercial career, Brown’s name was associated with an extraordinary number and range of memorable songs, distinctive dance steps, formative fashion trends, and even significant social issues. A skilled dancer and singer with an extraordinary sense of timing, Brown played a major role in bringing rhythm to the foreground of popular music. In addition to providing melody and embellishment, the horn players in his bands functioned as a rhythm section (they had to think like drummers), and musicians associated with him (Jimmy Nolan, Bootsy Collins, Fred Wesley, and Maceo Parker) have played an important role in creating the core vocabulary and grammar of funk music. Brown was inducted into the Rock and Roll Hall of Fame in 1986. 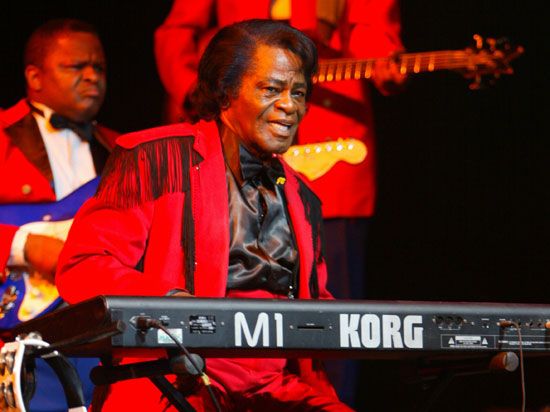