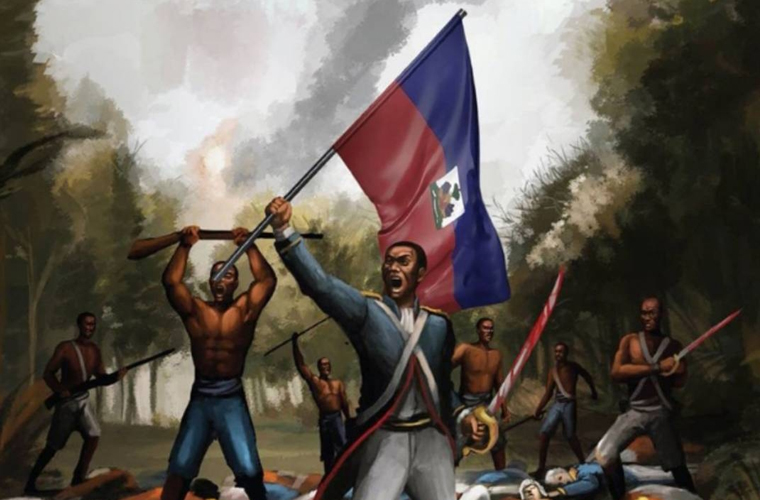 Born around 1758, in Africa, Jean-Jacques Dessalines was enslaved in the French colony of Saint-Domingue. He served as a lieutenant under Toussaint L’Ouverture after the 1791 slave revolt and later eliminated French rule. Dessalines renamed the colony Haiti in 1804 and declared himself emperor. Despised for his brutality, yet honored as one of Haiti’s founding fathers, he was killed in a revolt on October 17, 1806, in Pont Rouge, near Port-au-Prince, Haiti.

Jean-Jacques Dessalines’ biography is a mix of legend and history. Haitian tradition says he was born in central West Africa and transported as a slave to Sant-Domingue, (Haiti) in the French West Indies. However, most historians believe he was born Jean-Jacques Duclos, the name of his first owner, in Saint-Domingue, circa 1758. He became a field hand and eventually rose up to the role of foreman. At around age 30, he was sold to a free Black man named Dessalines and his surname was changed again. Jean-Jacques’ master proved to be cruel and brutal, a treatment that he may have adopted later in life as a means to an end.

Leading a Revolution
In 1791, a slave rebellion broke out in Sant-Domingue and Dessalines was able to escape the plantation and join rising rebel leader Toussaint L’Ouverture. Though illiterate, Dessalines was a quick study, positioning himself as L’Ouverture’s lieutenant and earning the nickname “the Tiger” for his ferocity in battle. Initially, their fight was to free all slaves on the island, but over time the goal would become independent.

In 1793, the French Republic declared an end to slavery in France and all colonies, and soon after L’Ouverture and Dessalines switched their allegiance to the French against the Spanish and British. Over the next ten years, Dessalines’ skill and leadership proved vital to L’Ouverture’s success in capturing the Spanish-controlled eastern half of the island. By 1799, Dessalines had risen to the rank of brigadier general.

With Europe temporarily distracted due to the rise of Napoleon, the slave rebellion turned into a civil war, and L’Ouverture and Dessalines fought for control of the island, crushing rivals and slave owners alike. By 1801, L’Ouverture was serving as governor-general of Haiti and Dessalines was second in command. Many whites and mulattos in Santa Dominque had lobbied France to reestablish slavery and the Napoleon sent a force to restore French rule on the island. L’Ouverture and Dessalines repelled the invading forces in the battle of Crête-à-Pierrot.

After the battle, Dessalines became disenchanted with L’Ouverture’s leadership and briefly sided with the French, possibly causing L’Overture’s capture and arrest in 1802. When it became clear that the French intended to reinstate slavery, Dessalines switched sides again and commanded rebel forces against the French. In a series of victories, Dessalines’ coalition of Black people and mulattos was successful in forcing the French to surrender and leave the island. In 1804, Dessalines proclaimed independence and in 1805 declared himself emperor. Haiti became the first Black independent republic in the world.

Emperor of Haiti
As emperor, Dessalines took drastic measures he felt necessary for Haiti to stay independent. He enforced a system of forced labor to prevent Haiti from reverting back to a subsistence economy. To eliminate rule by whites, he confiscated their land and made it illegal for them to own property. Probably his most extreme measure was a campaign to eliminate the white population of Haiti. Between February and April 1804, Dessalines ordered the deaths of approximately 3,000 to 5,000 white people of all ages and genders.

To his credit, Dessalines also tried to implement reforms to improve Haiti’s economy. He enforced tight regulation of foreign trade and favored commerce with Great Britain and the United States over France. He placed well-educated Haitians, primarily mulattos, into key positions in his administration.

The exact circumstances of Dessalines death are uncertain. What is known is that people of all classes were upset with his draconian labor and agricultural policies including the peasants, the fair-skinned elite, and the military. He was killed on October 17, 1806, possibly in an ambush led by Alexandre Pétion and Henri Christophe, who later split the country in two and ruled each section separately.

Death and Legacy
Despite his violent reign, Dessalines lives on as a figure of pride for Haitians. The day of his death, October 17, is a national holiday in Haiti. Dessalines’s legacy is embodied in Haiti’s national anthem, “La Dessalinienne.”