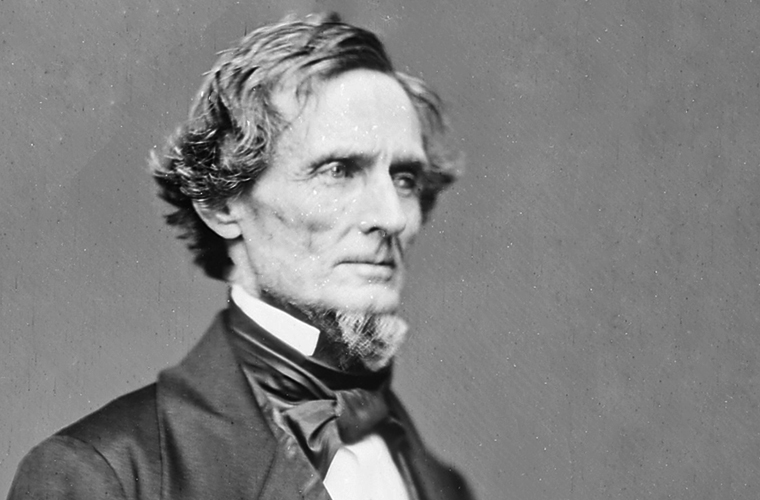 Jefferson Finis Davis, the first and only President of the Confederate States of America, was a planter, politician, and soldier born in Kentucky and raised in Mississippi. Davis was the tenth and youngest child of Revolutionary War soldier Samuel Davis and his wife Jane Cook Davis (Finis in Latin means final—the couple wanted no more children after Jefferson). Born June 3, 1808, he was heavily influenced by his oldest brother, Joseph, who saw to it that he was well educated. Davis attended college in Kentucky at Transylvania before entering the U.S. Military Academy at West Point in 1824.

As a military cadet, Davis’ performance was only adequate. When he graduated in 1828 he placed twenty-third in a class of thirty-four. He went on to serve briefly in the Black Hawk War in 1832. While stationed under Colonel Zachary Taylor (future President of the United States) the following year, he met the colonel’s daughter, Sarah. Jefferson Davis married her in 1835 against her father’s wishes. Sadly, the couple came down with bad cases of malaria only three months after the wedding, and the young bride died.

Jefferson Davis led a secluded life for the next eight years on his cotton plantation at Davis Bend, Mississippi. A slaveholder, Davis firmly believed in the importance of the institution of slavery for the South. In 1845 he married his second wife, Varina Howell, a young woman eighteen years old. Jefferson and Varina Davis eventually had six children—two girls and four boys—but only their daughters lived into adulthood.

In the same year, 1845, Mississippi sent Davis to the U.S. House of Representatives. His Congressional term was short, however. He resigned in June 1846 to fight in the Mexican War where he led his troops valiantly at the battles of Monterrey and Buena Vista. He was offered a promotion to brigadier general in 1847 but refused it when he was elected to the U.S. Senate.

A slaveholder, Davis firmly believed in the importance of the institution of slavery for the South

In 1853, President Franklin Pierce appointed Davis U.S. Secretary of War where he served with distinction and was recognized as one of the most capable administrators to hold the office. In 1857, Davis returned to the Senate as a vocal proponent of states’ rights. He formally withdrew from the U.S. Senate on January 21, 1861, after Mississippi seceded from the Union.

One month later, the Confederate Congress in Montgomery, Alabama selected Jefferson Finis Davis to become the provisional President of the Confederacy. He was inaugurated for a six-year term as President on February 22 of the following year. Davis’ appointment was largely political; he was a compromise candidate chosen to appease both the moderate and radical factions in the Congress. Davis, however, did not want the job. He had hoped for a military command.

Initially, Davis was a popular President with the Southern people. He had a dignified bearing, a distinguished military record, extensive experience in political affairs, and—most importantly—a dedication to the Confederate cause. Unfortunately for Davis, these attributes were not enough to triumph over the harsh challenges posed by his new position. His early popularity as a result of war fervor and he did not have the personality necessary to sustain it. He was impatient with people who disagreed with him, and he had the unfortunate habit of awarding prominent posts to leaders who appeared unsuccessful. Davis’ loyalty to these people led to bickering and quarrels throughout his administration. In addition, he was plagued by chronic illness.

Davis’ popularity and effectiveness were not enhanced by the growing numbers of Confederate defeats in the latter years of the War. On April 2, 1865, he and the other members of the Confederate government were forced to flee from Richmond before the advancing Union Army. The Confederate President was captured by Northern soldiers near Irwinville, Georgia on May 10, 1865.

Jefferson Davis was imprisoned at Fort Monroe, Virginia for two years. He was never tried for treason but was released on bond in May 1867. After being released, Davis and his family traveled for some time in Europe before returning to the American South. They first took up residence in Tennessee then relocated to the Mississippi gulf coast where Davis lived out his retirement years at an estate called Beauvoir near Biloxi. Mississippi tried to return him to the U.S. Senate, but he was not legally qualified to serve since he refused to request an official pardon from the United States for his role in the Civil War. Like many of his contemporaries, Davis wrote about his wartime experiences. Entitled The Rise and Fall of the Confederate Government (vol 1, vol 2), his two-volume book was published in 1881.

Jefferson Finis Davis died in New Orleans, Louisiana on December 6, 1889. The year before his death the former President of the Confederate States of America beseeched the young men of Mississippi to “lay aside all rancor, all bitter sectional feeling, and to make your places in the ranks of those who will bring about a consummation devoutly to be wished—a reunited country.”