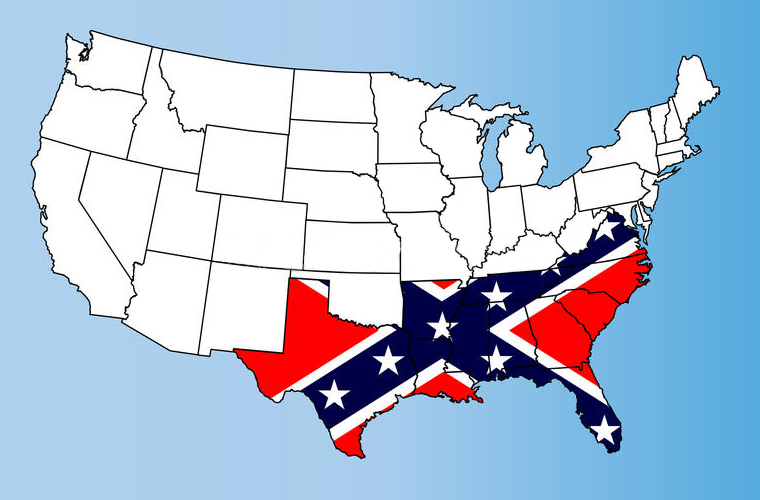 NORTH VERSUS SOUTH
The southern and northern United States began to pull apart in the 19th century, culturally and economically, with slavery at the center of the rift. As early as 1850, South Carolina and Mississippi called for secession. By 1860, Southern politics was dominated by the idea of states’ rights in the context of slavery to support the South’s agricultural economy, and slave-heavy, cotton-producing agricultural states embraced secession as the solution.

ABRAHAM LINCOLN
The election of Abraham Lincoln was labeled an act of war by some Southern politicians, who predicted armies would come to seize slaves and force white women to marry black men. Secession meetings and assemblies started to appear across the South. As secession began to seem more likely, so did the war. Altercations with Union troops at Fort Sumter, South Carolina, and Fort Pickens, Florida, escalated. Southern politicians began to procure weaponry, and some secessionists even proposed kidnapping Lincoln.

CONFEDERATE CONSTITUTION
The Confederacy used the U.S. Constitution as a model for its own, with some wording differences and a few changes regarding the executive and judicial branches. The Confederate president would serve for six years with no reelection possibility, but was considered more powerful than his Union counterpart. While the Confederate Constitution upheld the institution of slavery, it prohibited the African slave trade. 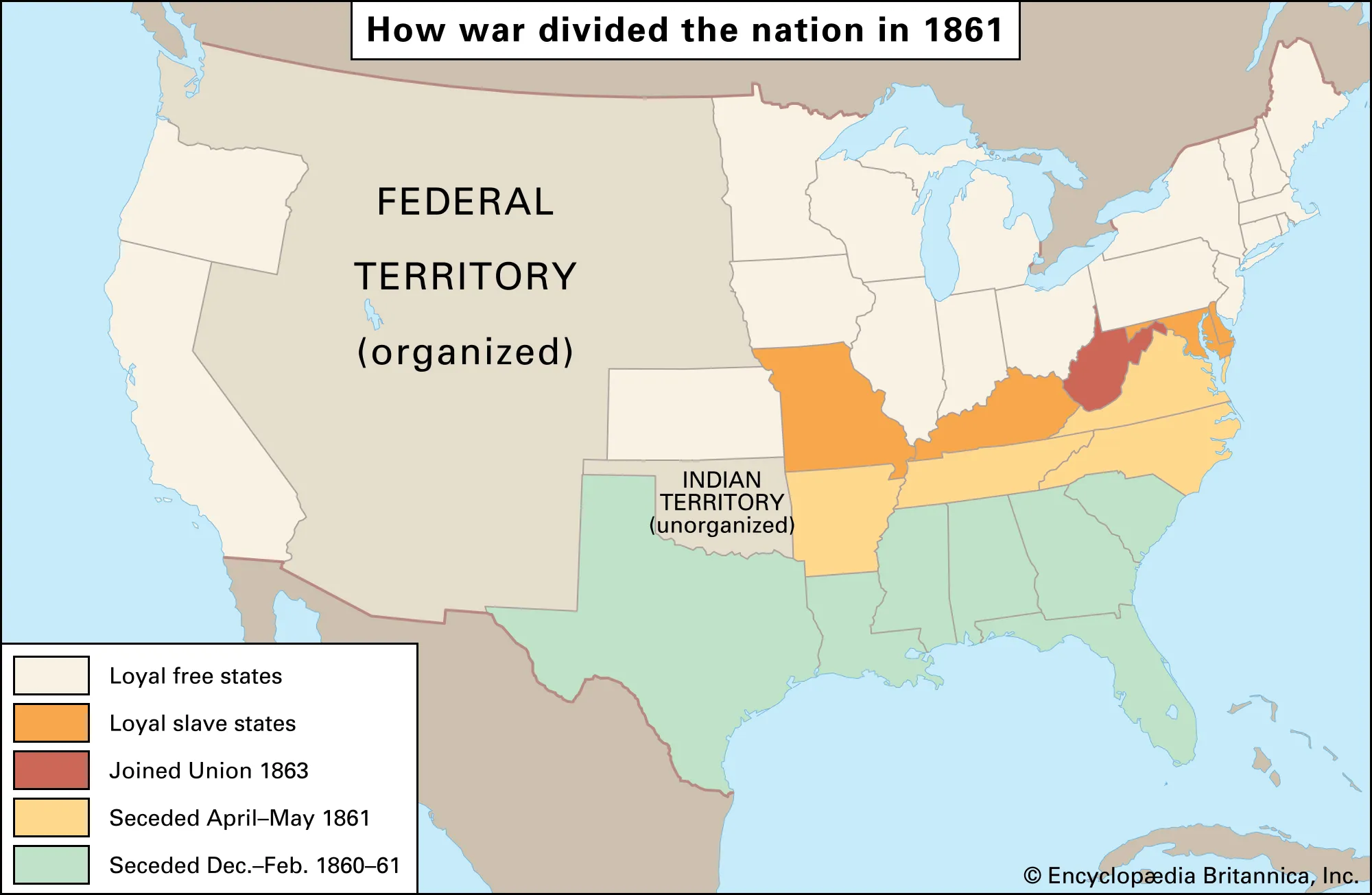 CONFEDERATE ENLISTMENT
Davis predicted a long war and requested legislation allowing three-year enlistments. The military affairs office, however, anticipated a short conflict and granted the authority to call up troops for only one year of service. On March 9, 1861, Davis called up 7,700 volunteers from five states, joining volunteers in South Carolina. By mid-April, 62,000 troops were raised and stationed in former Union bases.

CIVIL WAR BEGINS
On April 12, 1861, following diplomatic bickering over Lincoln’s pledge to get supplies to Union troops at Fort Sumter, Confederate forces fired shots at the fort and Union troops surrendered, sparking the Civil War. In rapid succession, Virginia, North Carolina, Tennessee and Arkansas joined the Confederacy. In May, Davis made Richmond, Virginia, the Confederate capital. The city was soon filled with some 1,000 government members, 7,000 civil servants, and scores of rowdy Confederate soldiers itching for battle. The First Battle of Bull Run took place on July 16, 1861, and ended with a Confederate victory.

CONFEDERATE ARIZONA
The Arizona Territory voted to join the Confederacy in March 1861, but it wasn’t until 1862 that the territorial government got around to officially proclaiming it part of the Confederate States of America. Several battles took place within the territory, and in 1863, Confederate forces were vanquished from the Arizona Territory, which was claimed as Union and then split into two territories, the second being the New Mexico Territory.

MARTIAL LAW AND MANDATORY SERVICE
Most of the work of the Confederate government involved trying to wage the Civil War without the appropriate means, a domino effect that sometimes rendered it helpless. In February 1862, Davis was granted the authority to suspend habeas corpus, which he did immediately until July 1864, and to declare martial law, which Davis did many times during the war. Problems with adequately arming the troops, as well as getting supplies to them, hampered war efforts. The brief one-year enlistment also caused problems because as the war dragged on, rates of volunteering and re-enlistment fell.

Davis was soon forced to make military service mandatory for all able-bodied males between 18 and 35 years old. Later exemptions were made for owners of 20 slaves or more. Regardless, Union troops radically outnumbered the Confederate troops.

A SHORTAGE OF MEN
The draft created a deficit in civilian manpower to police the slave population. States created separate courts to try slaves because of elevated disobedience levels. Paranoia rose, and some hoped to remedy it by conscripting slaves into military service.

There was also a severe shortage of white workers. Out of need, the Confederacy employed both free and enslaved blacks at a higher rate during the war, using blacks to support the troops with services and by working in hospitals as nurses and orderlies.

CONFEDERACY IN CHAOS
State governors found themselves continually in conflict with Davis about government overreach challenging their sacred states’ rights, especially federal conscription laws. The military exacerbated the situation: As the war dragged on, some troops prowled the countryside to rob civilians. Others rounded up civilians for random (often unfounded) infractions, infuriating local authorities.

FINANCIAL DISASTER
The chaos in government spread outward. The Confederacy was plagued by major economic problems throughout the war, unable to keep up with the production boom in the industrialized north and incapable of overcoming the export limitations brought on by war. As the war neared its end, the Confederacy was crippled by severe infrastructure problems that it could not afford to fix and was desperate for supplies. With banks decimated and closing, it attempted to pay for its needs with IOUs.

CONFEDERATE LOSSES
Despite further conscription efforts, Confederate forces dwindled to about one-third the manpower of their Union foes. Davis faced opposition in Congress and attempted to save his position by restructuring military leadership. Militarily, the Confederacy saw considerable losses on the battlefields, and Atlanta and Chattanooga were taken by Union forces, which continued to advance. Increasing numbers of Confederate soldiers were deserting and returning home. The Conscript Bureau was closed in 1865, no longer able to find men to draft.

ARMING THE SLAVES
The concept of drafting and arming slaves was a recurring issue throughout the Confederacy’s existence, and it almost became a reality just before the fall of the rebel nation. In the final session of Congress in 1865, Davis proposed the federal government purchase 40,000 slaves for military work followed by some form of emancipation. In March, Congress voted to arm slaves but offered no emancipation.

General Order 14 resulted, which would immediately give freedom to slaves who served in the military. Recruiting and training black soldiers began. Some members of Congress, however, began to make amends with the Union. Resignations began to pile up in the president’s cabinet. Three weeks later, Richmond fell, and Davis fled to North Carolina.

By May, Confederate officials announced the government had ended. Davis refused to give up hope, but was captured by Union forces in Georgia in May 1865, and sent to prison for two years. He never backed down on his devotion to the Confederate cause.

The Civil War officially ended on May 13, 1865, and the Confederate States of America ceased to exist.