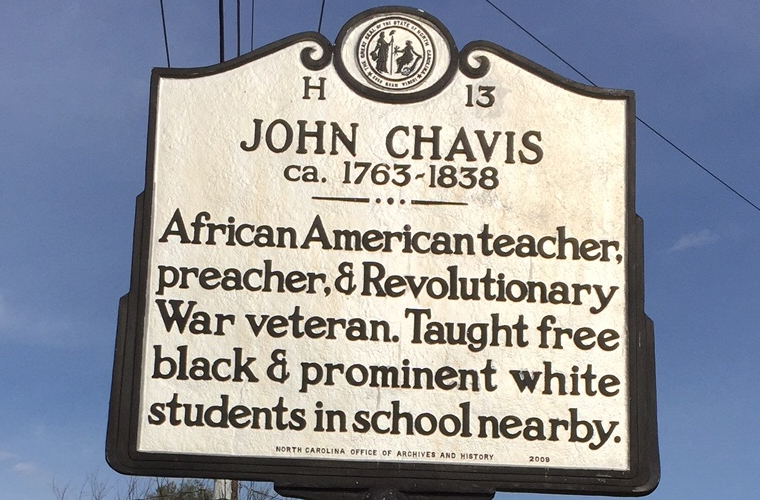 John Chavis, an early 19th Century minister, and teacher was the first African American to graduate from a college or university in the United States. Chavis was born on October 18, 1763.  His place of birth is debated by historians.  Some scholars think that Chavis hailed from the West Indies.  Others believe that he was born in Mecklenburg County, Virginia, or that he was born in North Carolina.  Available records document that Chavis was a free African American who probably worked for Halifax, Virginia attorney James Milner beginning in 1773.   It is likely that Chavis utilized the books in Milner’s extensive law library to educate himself.

In 1778, while still a teenager, Chavis entered the Virginia Fifth Regiment and fought in the Revolutionary War.  He served in the Fifth Regiment for three years.  In the 1780s, Chavis earned his living as a tutor, and while working in this capacity, he married Sarah Frances Anderson.  Although an excellent teacher, Chavis’ own intellectual capacity was not satisfied.  He soon moved his family to New Jersey to enter a tutorial program with John Witherspoon, one of the signers of the Declaration of Independence.  In 1792, at the age of 29, Chavis was accepted into the College of New Jersey‘s Theological School, later renamed Princeton University.

In 1808, John Chavis opened a private school in Raleigh, North Carolina, where he taught black and white children. Chavis specialized in Latin and Greek, and his school soon gained a reputation for excellence.   Before long, however, white parents protested the presence of black pupils, and Chavis re-arranged his school, teaching white children during the day and African American children by night.  Despite their insistence on segregated classrooms, some of North Carolina’s most powerful whites sent their children to Chavis to be educated.  Chavis educated a generation of young North Carolinians including the children of Governor Charles Manly.

In his later years, Chavis became a vocal supporter of the abolitionist movement.  His outspokenness may have cost him the allegiance of some white families.  While a few abolitionists in Virginia and North Carolina were allowed to openly express their views, the Nat Turner slave rebellion, which took place in Southampton County, Virginia in August 1831, made such dissent unacceptable.  Afterward, Virginia and North Carolina enacted legislation that placed restrictions on free African Americans‘ movement and education.  Chavis could no longer practice his professions in North Carolina.  He became, however, more vocal in his condemnation of slavery and fought for the rights of African American citizens.  Foul play may have lead to Chavis’ mysterious death in June of 1838.  He was survived by his wife, and son, Anderson Chavis.