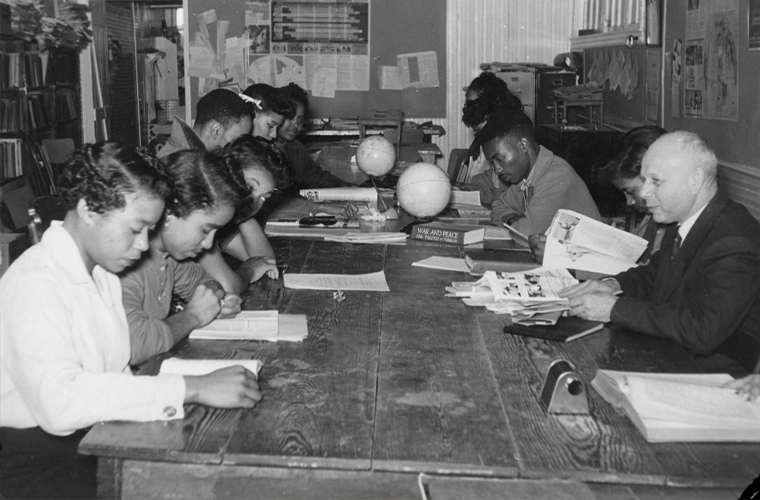 When Jewish refugee Ernst Borinski fled Nazi Germany, he found a new home in a very strange place: Jackson, Mississippi. The South was openly a racial hierarchy when he arrived in the 1940s, and Jews were not considered white. Yet Borinski was just one of about 50 Jewish intellectuals who fled the Holocaust and settled in the deep South to teach at historically black universities.

Not all intellectuals who made it to the United States were so relatively fortunate as Albert Einstein, who spent his later career at the Institute for Advanced Study in Princeton. Anti-semitism was part of life here, with official and unofficial quota systems in place to limit the number of Jewish students on campuses. Most colleges did not throw open their doors to lesser-known academics seeking refuge from the Nazis, but other organizations, including the American Quakers, did work to place Jewish academics at universities throughout the West and South. They circumvented quotas by dispersing the refugees, even paying their salaries for universities that agreed to hire the German Jews.

Borinski, one of those lesser-known intellectuals, was a judge and lawyer when he left Germany for the United States in 1938. He served in the United States Army during WWII and earned his master’s degree from the University of Chicago before he applied for the position at Tougaloo College. His fellow German Jewish intellectuals who found refuge at historically black colleges in the South included economist Fritz Pappenheim and philosopher Ernst Manasse.

They were uniformly shocked by conditions in the South. “I was entirely unprepared when I came here,” Manasse told historian Gabrielle Simon Edgcomb, who first collected their stories in her book From Swastikas to Jim Crow, in a 1991 interview. Manasse taught at North Carolina Central University in Durham, North Carolina, starting in 1939. Decades after his arrival in the United States, Manasse stuttered with amazement as he told Edgcomb stories of his early days in the South. Manasse did not have a car, and kind African American colleagues had taken to giving him a lift. “We had rented the house at this time,” he recalled, “and I was called to the rent office. The neighbors had complained that I had Negro visitors who were not cleaning ladies or something like that.” A month or so later he got a ride again and was once again called to the rent office. “I was told that the neighbor would not stand for it and that if it happened again that he would shoot. Not at me, but at him [my colleague].”

They were a group of people who should have been more difficult to surprise, given what was happening in Europe at the time. Pappenheim, who taught sociology, economics, and German at Talladega College in Talladega, Alabama left Germany in 1933 following Hitler’s rise to power. He settled in Spain, only to run from Franco’s regime at the end of the Spanish Civil War. Pappenheim then sought refuge in France and was interned there in a concentration camp. Eight years after he left Hitler’s Germany, in 1941, he settled in the United States.

Pappenheim was determined to remain in Alabama, but he was denied tenure because of his openly Marxist orientation and left the South for Cambridge, Massachusetts. His students were furious and protested by locking the board of regents in the building where they met on a steamy, southern summer day. The board acquiesced to their demands and fired the college president who had denied Pappenheim tenure. Pappenheim remains well-known for the book he wrote after leaving Talladega, The Alienation of Modern Man.

Borinski became a noted sociologist from his perch in the deep South, but his legacy at Tougaloo College extended far beyond his academic field. He created an interracial intellectual salon called the Social Science Forum that featured speakers critical of injustice, a dangerous act at the time. Even more radical were the dinners that preceded the talks. He asked his African American students to come early and sit in every other seat so that whites arriving later had to sit next to a black person. For many, black or white, it was the first time they’d had a meal with someone of a different race.

The college was a refuge for Borinski, and in turn, he made the college a refuge for his students and others who wanted to see a change in the South, offering a place of like-mindedness, if not physical safety, at a time when protest could easily be a deadly proposition. “Each person in his own way could make a contribution,” Borinski explained, “and mine was to bring people together to share ideas.” He devoted his life to the college and asked to be buried on the campus.

The roster of students who called these refugee intellectuals their mentors is impressive, including civil rights activists Joyce Ladner, former Surgeon General Jocelyn Elders, and artist John Biggers. The refugee professors recall the kinship they felt with their students because of their shared experiences as persecuted minorities, a rapport that may have been hard to build at other institutions. “It was relatively easy to teach them,” Manasse reflected, “something that may not have been as easy as that at a white college.”

The debt the refugees owed the black colleges who welcomed them, as Manasse acknowledged, could not be repaid. Though he too was eventually invited to the Institute for Advanced Studies, he took a temporary position there and returned to North Carolina Central after a semester. When one of his students asked why he didn’t leave, Manasse replied, “Oh, I could never do that. I will always stay here.”