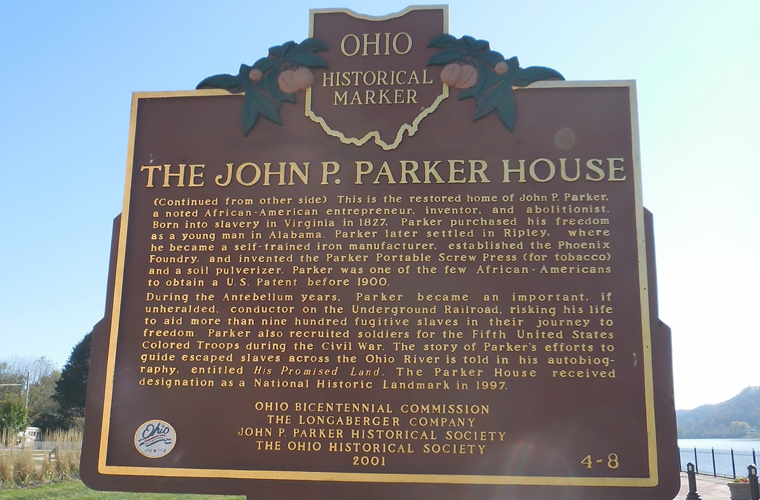 John Parker, inventor, and businessman was also a prominent Underground Railroad conductor before the Civil War.  He was reputedly responsible for the rescue of nearly 1,000 enslaved people between 1845 and 1865.  Parker repeatedly crossed the Ohio River from his home in Ripley, Ohio, often going as far as 20 miles on foot into Kentucky to rescue fugitive slaves and bring them to freedom.

Parker’s activities were eventually known to authorities in Kentucky and in the 1850s a reward of $1,000 was placed on his head.  Given that attention, it is not surprising that Parker always publicly denied his involvement with the Underground Railroad before 1865.  When his story was finally shared in 1886 it eventually wound up as an unpublished manuscript in the Duke University Library Archive and was largely ignored until 1996, when Stuart Sprague, a historian at Morehead State University in Kentucky, brought it to life with the publication of His Promised Land: The Autobiography of John P. Parker, Former Slave, and Conductor on the Underground Railroad.

John Parker was born enslaved about 1827 in Norfolk, Virginia. He remembered his father as being “one of the aristocrats of Virginia.” At the age of eight, he was sold and taken to Richmond, Virginia.  Six months later, he was sold again and chain-walked to Mobile, Alabama, where he was purchased by a physician as a house servant.  Although they were breaking Alabama law, the physician’s two sons taught John to read and write. The boys smuggled books from their father’s library to give to John to read.  While still enslaved, Parker developed a great appreciation for the works of Shakespeare and the English poets.

By the early 1840s, Parker was apprenticed by the physician to be a foundry worker and learn the iron molder trade. He learned quickly but was dismissed from work after clashes with foremen at various foundries.  Fed up, the physician decided to sell John as a farm hand.  Parker persuaded Elizabeth Ryder, one of the physician’s patients, to purchase him instead.  Ryder allowed John to use his wages to buy his freedom and by 1845 he was living first in Indiana, then Cincinnati, and finally in Ripley, Ohio, where he started his own foundry.

During the day Parker was the employer of 10 workers at his business, the Phoenix Foundry, and a father to a young family. At night, however, he guided runaways across the Ohio River.  His most daring exploit was sneaking into a slaveholder’s home to rescue a slave baby being held hostage to prevent the parents from running away.

After the war, Parker devoted his full attention to his foundry.  The 1870 Census listed him as the 27th wealthiest person in Ripley, Ohio. He also owned one of the city’s largest collections of books.

By the 1880s Parker became an inventor.  In 1884, 1885, and 1890, the U.S. Patent Office approved his patents for an improved tobacco press, a portable tobacco press, and soil pulverizer, respectively.  He also expanded into the flour milling business and his product was displayed at the New Orleans Exposition in 1884.

John Parker married Miranda Bolden on May 12, 1848. They were the parents of eight children. John Parker died in Ripley on January 30, 1900.  Parker’s home in Ripley has been restored and tours occur under the auspices of the John Parker Historical Society.