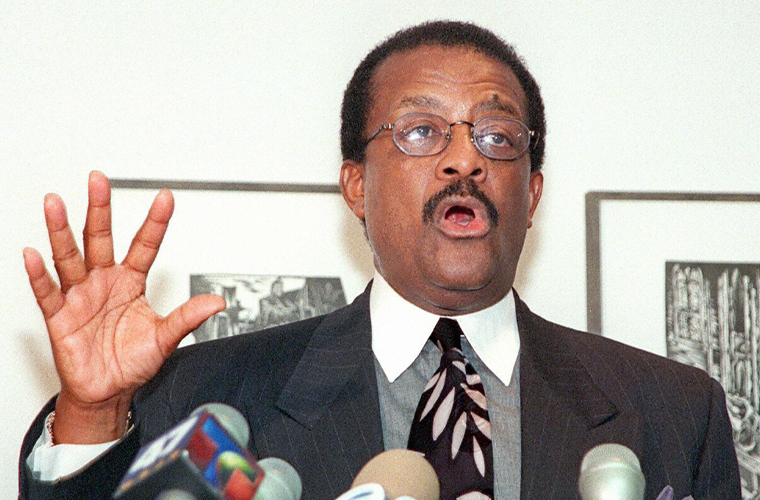 Johnnie Cochran established himself as a sought-after attorney dealing with high-profile police brutality cases involving the African American community. He attracted famous clients like Michael Jackson and led O. J. Simpson’s defense team in the 1995 murder trial. Amidst much debate over the case, Cochran entered the national spotlight and became a celebrity himself, making screen appearances and writing his memoirs.

Education and Early Career
Johnnie L. Cochran Jr. was born on October 2, 1937, in Shreveport, Louisiana, to Hattie and Johnnie L. Cochran Sr. The family moved to California in 1943, where the younger Cochran eventually excelled as a student in what was becoming a more racially integrated environment. In 1959, he received his bachelor’s degree from the University of California, Los Angeles, and later attended Loyola Marymount University Law School, graduating in 1962. Upon passing the bar, Cochran worked as a deputy criminal prosecutor in Los Angeles. By mid-decade, he’d entered private practice with Gerald Lenoir and soon launched a firm of his own, Cochran, Atkins & Evans.

Cases Involving Police
Around this time, Cochran began to build a reputation for taking on cases involving questionable police actions against African Americans. In 1966, a Black motorist named Leonard Deadwyler, while attempting to get his pregnant wife to a hospital, was killed by police officer Jerold Bova. Cochran filed a civil suit on behalf of Deadwyler’s family; though he lost, the attorney was nonetheless inspired to take on police abuse cases over the ensuing years. During the early 1980s, he oversaw a settlement for the family of African American football player Ron Settles, who died in a police cell under questionable circumstances. The following decade, Cochran won a huge, unprecedented court payment for a 13-year-old molested by an officer.

In the early 1970s, Cochran also went to court in defense of Geronimo Pratt, a former Black Panther accused of murder. Pratt was convicted and imprisoned, while Cochran maintained that the activist was railroaded by authorities, pushing for a retrial. (The conviction was eventually overturned after more than two decades. Pratt was released, with Cochran also overseeing a wrongful imprisonment suit.) In 1978, Cochran once again became part of the city’s legal force when he joined the Los Angeles County district attorney’s office, although he eventually returned to private practice.

O.J. Simpson Trial
Over the years, Cochran’s roster included famous entertainers like actor Todd Bridges, who was charged with attempted murder, and pop icon Michael Jackson, with Cochran arranging an out-of-court settlement for the singer in relation to child molestation charges.

In 1994, Cochran joined Alan Dershowitz, F. Lee Bailey, Robert Shapiro, Barry Scheck, and Robert Kardashian to form the core of the so-called “dream team” of lawyers hired to defend athlete/actor O.J. Simpson in his trial for the murders of his wife Nicole Brown Simpson and her friend Ron Goldman. The “trial of the century,” as it was dubbed, began in January 1995 and was among the most publicized in history, followed by millions around the world.

Cochran, displaying his trademark style, came to lead the team, with some conflict rising among the attorneys amidst sensational proceedings. Upon Simpson trying on bloodied gloves that prosecutors alleged were used during the murder, Cochran came up with a phrase that would become famous: “If it doesn’t fit, you must acquit.” Under the auspices of Bailey, who had a private investigator background, the team also discovered that detective Mark Fuhrman had made racist, highly incendiary remarks about African-American citizens. Cochran thus made controversial closing statements in which he compared the detective’s philosophy to that of Nazi dictator Adolf Hitler.

Simpson was found not guilty in his murder trial, yet nonetheless faced civil litigation, with millions in damages awarded to the Brown and Goldman families.

Controversies, Later Work, and Death
Because of widespread coverage of the Simpson trial, Cochran entered the superstar realm of celebrity, reportedly receiving a $2.5 million advance to write his memoirs. Yet more controversy followed the lawyer when items from his personal life were publicly revealed. His first wife, Barbara Cochran Berry, wrote her own memoir — Life After Johnnie Cochran: Why I Left the Sweetest Talking, Most Successful Black Lawyer in L.A. — accusing her ex-husband of cruel behaviors that included physical and emotional abuse. Cochran’s longtime mistress, Patricia Sikora, also spoke out against the attorney.

Cochran penned the books, Journey, to Justice (1996) and A Lawyer’s Life (2002). He appeared on Court TV’s Inside America’s Courts and was also featured on a number of TV programs, including Jimmy Kimmel Live, The Chris Rock Show, and The Roseanne Show as well as the Spike Lee film Bamboozled (2000). Cochran continued to take on new cases into the new millennium, ranging from work for clients like Abner Louima, who was tortured while in New York City police custody, and rapper/music mogul Sean “Puffy” Combs, to anti-trust litigation issued against racing giant NASCAR.

In 2004, Cochran’s associates revealed that he was suffering from an undisclosed illness. He died from a brain tumor on March 29, 2005, at the age of 67.