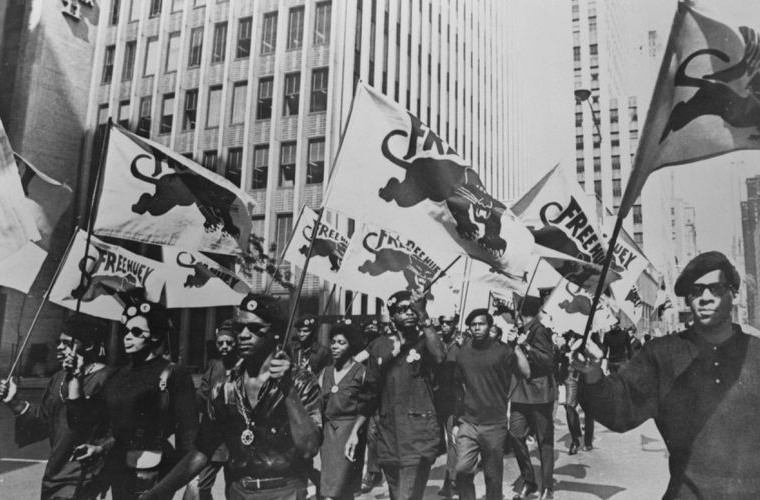 Black Panther Party founders Huey Newton and Bobby Seale met in 1961 while students at Merritt College in Oakland, California. They both protested the college’s “Pioneer Day” celebration, which honored the pioneers who came to California in the 1800s but omitted the role of African Americans in settling the American West. Seale and Newton formed the Negro History Fact Group, which called on the school to offer classes in black history. They founded the Black Panthers in the wake of the assassination of black nationalist Malcolm X and after police in San Francisco shot and killed an unarmed black teen named Matthew Johnson.

Originally dubbed the Black Panther Party for Self-Defense, the organization was founded in October 1966. The Black Panthers’ early activities primarily involved monitoring police activities in black communities in Oakland and other cities.

As they instituted a number of social programs and engaged in political activities, their popularity grew. The Black Panthers drew widespread support from urban centers with large minority communities, including Los Angeles, Chicago, New York, and Philadelphia. By 1968, the Black Panthers had roughly 2,000 members across the country.

Newton and Seale drew on Marxist ideology for the party platform. They outlined the organization’s philosophical views and political objectives in a Ten-Point Program. The Ten-Point Program called for an immediate end to police brutality; employment for African Americans; and land, housing, and justice for all. The Black Panthers were part of the larger Black Power movement, which emphasized black pride, community control and unification for civil rights.

While the Black Panthers were often portrayed as a gang, their leadership saw the organization as a political party whose goal was getting more African Americans elected to political office. They were unsuccessful on this front. By the early 1970s, FBI counterintelligence efforts, criminal activities and an internal rift between group members weakened the party as a political force.

The Black Panthers did, however, start a number of popular community social programs, including free breakfast programs for school children and free health clinics in 13 African American communities across the United States. The Black Panthers were involved in numerous violent encounters with police. In 1967, founder Huey Newton allegedly killed Oakland police officer John Frey. Newton was convicted of voluntary manslaughter in 1968 and was sentenced to two to 15 years in prison. An appellate court decision later reversed the conviction.

Eldridge Cleaver, editor of the Black Panther’s newspaper, and 17-year old Black Panther member and treasurer Bobby Hutton were involved in a shootout with police in 1968 that left Hutton dead and two police officers wounded.

Conflicts within the party often turned violent too. In 1969, Black Panther Party member Alex Rackley was tortured and murdered by other Black Panthers who thought him a police informant. Black Panther bookkeeper Betty Van Patter was found beaten and murdered in 1974. No one was charged with the death, though many believed that party leadership was responsible.

The Black Panthers’ socialist message and black nationalist focus made them the target of a secret FBI counterintelligence program called COINTELPRO.

In 1969, the FBI declared the Black Panthers a communist organization and an enemy of the United States government. The first FBI’s first director, J. Edgar Hoover, in 1968 called the Black Panthers, “One of the greatest threats to the nation’s internal security.” The FBI worked to weaken the Panthers by exploited existing rivalries between black nationalist groups. They also worked to undermine and dismantle the Free Breakfast for Children Program and other community social programs instituted by the Black Panthers.

In 1968, Chicago police gunned down and killed Black Panther Party members Fred Hampton and Mark Clark, who were asleep in their apartment. About a hundred bullets were fired in what police described as a fierce gun battle with members of the Black Panther Party. However, ballistics experts later determined that only one of those bullets came from the Panthers’ side. Although the FBI was not responsible for leading the raid, a federal grand jury later indicated that the bureau played a significant role in the events leading up to the raid.

The United States Commission on Civil Rights and the Southern Poverty Law Center have called the New Black Panther Party a hate group.