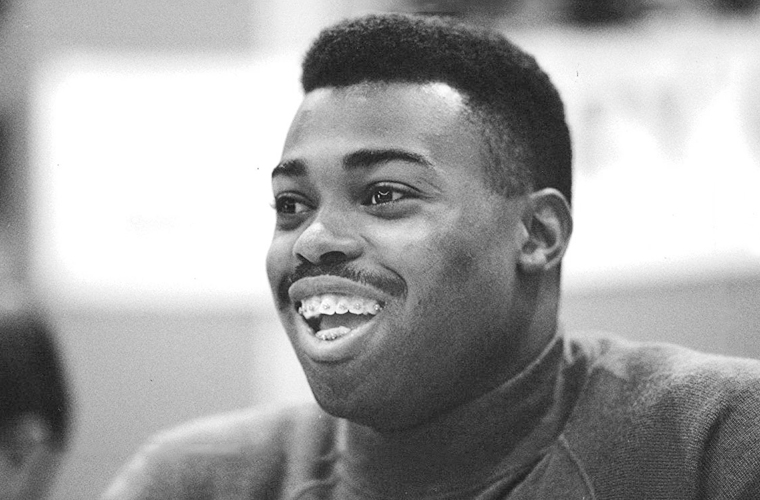 Leroy Russel Burrell (born February 21, 1967) is an American former track and field athlete, who twice set the world record for the 100 m sprint. He first set the world record in June 1991 with a time of 9.90 seconds. This was broken that September by Carl Lewis who ran 9.86 sec at the World Track and Field Championships where Burrell finished second in a new personal best time of 9.88 sec. In July 1994, Burrell set the world record for the second time when he ran 9.85 sec (a record that stood until the 1996 Olympics when Donovan Bailey ran 9.84 sec). Burrell grew up in Lansdowne, Pennsylvania, and attended Penn Wood High School, where he single-handedly won the state championship by winning the 100 m, 200 m, long jump, and triple jump. Suffering from poor eyesight accentuated by a childhood eye injury, he was poor at other sports but excelled on the track from an early age.

Burrell studied at the University of Houston, where he was a successful participant in its track program. In 1985–86, Burrell broke Houston’s freshman long jump record that was held by Carl Lewis, when he leaped 26 feet 9 inches at a dual meet against UCLA in 1986. Later that season, he faced one of the most challenging moments of his track career. After jumping 26′ 7.25″ (8.11 m) in the preliminaries of the 1986 Southwest Conference (SWC) Outdoor Championships, Burrell jumped almost 27 feet (8.23 m) before landing awkwardly on his third jump. He tore the anterior cruciate ligament in his left knee. He finished second at the meet, but many people feared the injury could be career-ending.

Burrell was plagued by injuries and bad luck throughout his career, particularly around major championships. He won gold in the 100 m ahead of Carl Lewis at the 1990 Goodwill Games in Seattle. He won the silver in the 100 m behind Lewis at the 1991 World Championships. At the 1992 Summer Olympics in Barcelona, Burrell false-started in the 100 m final. When the race finally restarted, his reaction off the line was slow, and he finished fifth. He did manage to win a relay gold as part of the U.S. 4 × 100 m team.

Since his retirement in 1998, Burrell has replaced his old college mentor, Tom Tellez, as coach of the University of Houston’s track team. Burrell has led UH to 14 men’s Conference USA titles (nine indoor, five outdoor) and nine women’s titles (four indoor, five outdoor). He was inducted into the Texas Track and Field Coaches Hall of Fame in 2014.

Burrell married Michelle Finn, also a sprinter, in 1994, and they have three sons: Cameron, a sprinter for the Houston Cougars, Joshua, and Jaden. On June 7, 2017, Cameron joined his father in the sub-10 second club. Burrell’s younger sister Dawn also competed in track and field at the highest level and she was a world indoor champion in the long jump.