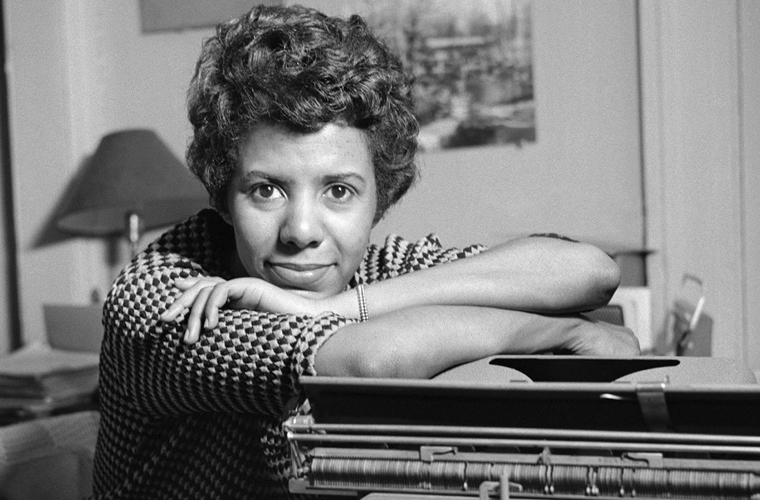 Lorraine Hansberry was born at Provident Hospital on the South Side of Chicago on May 19, 1930. She was the youngest of Nannie Perry Hansberry and Carl Augustus Hansberry’s four children. Her father founded Lake Street Bank, one of the first banks for blacks in Chicago, and ran a successful real estate business. Her uncle was William Leo Hansberry, a scholar of African studies at Howard University in Washington, D.C.

Despite their middle-class status, the Hansberry’s were subject to segregation. When she was 8 years old, Hansberry’s family deliberately attempted to move into a restricted neighborhood. Restrictive covenants, in which white property owners agreed not to sell to blacks, created a ghetto known as the “Black Belt” on Chicago’s South Side. Carl Hansberry, with the help of Harry H. Pace, president of the Supreme Liberty Life Insurance Company, and several white realtors, secretly bought a property at 413 E. 60th Street and 6140 S. Rhodes Avenue. The Hansberry’s moved into the house on Rhodes Avenue in May 1937.

The family was threatened by a white mob, which threw a brick through a window, narrowly missing Lorraine. The Supreme Court of Illinois upheld the legality of the restrictive covenant and forced the family to leave the house. The U.S. Supreme Court reversed the decision on a legal technicality. The result was the opening of 30 blocks of South Side Chicago to African Americans. Although the case did not argue that racially restrict covenants were unlawful, it marked the beginning of their end.

Lorraine graduated from Englewood High School in Chicago, where she first became interested in theater. She enrolled at the University of Wisconsin but left before completing her degree. After studying painting in Chicago and Mexico, Hansberry moved to New York in 1950 to begin her career as a writer. She wrote for Paul Robeson’s Freedom, a progressive publication, which put her in contact with other literary and political mentors such as W.E.B. DuBois and Freedom editor Louis Burnham. During a protest against racial discrimination at New York University, she met Robert Nemiroff, a Jewish writer who shared her political views. They married on June 20, 1953, at the Hansberrys’ home in Chicago.

In 1956, her husband and Burt D’Lugoff wrote the hit song, “Cindy, Oh Cindy.” Its profits allowed Hansberry to quit working and devote herself to writing. She then began a play she called The Crystal Stair, from Langston Hughes’ poem “Mother to Son.” She later retitled it A Raisin in the Sun from Hughes’ poem, “Harlem: A Dream Deferred.”

In A Raisin in the Sun, the first play written by an African American woman to be produced on Broadway, she drew upon the lives of the working-class black people who rented from her father and who went to school with her on Chicago’s South Side. She also used members of her family as inspiration for her characters. Hansberry noted similarities between Nannie Hansberry and Mama Younger and between Carl Hansberry and Big Walter. Walter Lee, Jr. and Ruth are composites of Hansberry’s brothers, their wives, and her sister, Mamie. In an interview, Hansberry laughingly said “Beneatha is me, eight years ago.”

Her second play, The Sign in Sidney Brustein’s Window, about a Jewish intellectual, ran on Broadway for 101 performances. It received mixed reviews. Her friends rallied to keep the play running. It closed on January 12, 1965, the day Hansberry died of cancer at 34.

Although Hansberry and Nemiroff divorced before her death, he remained dedicated to her work. As literary executor, he edited and published her three unfinished plays: Les Blancs, The Drinking Gourd, and What Use Are Flowers? He also collected Hansberry’s unpublished writings, speeches, and journal entries and presented them in the autobiographical montage To Be Young, Gifted and Black. The title is taken from a speech given by Hansberry in May 1964 to winners of a United Negro Fund writing competition: “…though it is a thrilling and marvelous thing to be merely young and gifted in such times, it is doubly so, doubly dynamic, to be young, gifted and black!”