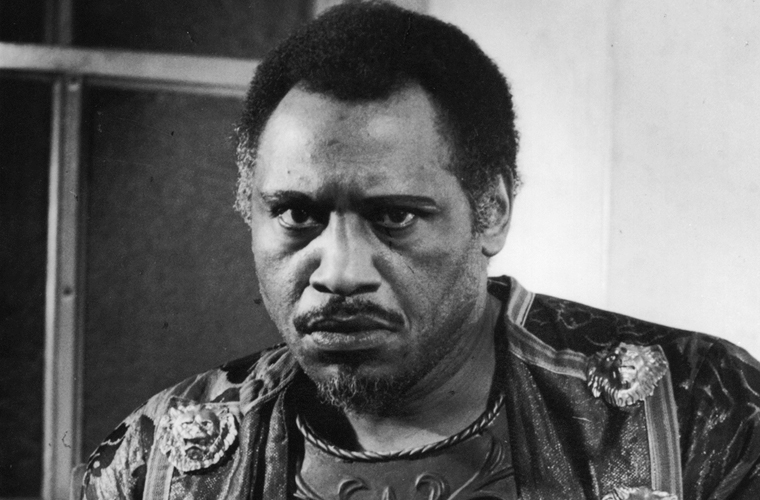 Paul Robeson was a stellar athlete and performing artist. He starred in both stage and film versions of Emperor Jones and Show Boat and established an immensely popular screen and singing career of international proportions. Robeson spoke out against racism and became a world activist, and was blacklisted during the paranoia of McCarthyism in the 1950s.

Early Years
Paul Leroy Robeson was born on April 9, 1898, in Princeton, New Jersey, to Anna Louisa and William Drew Robeson, an escaped enslaved person. Robeson’s mother died from a fire when he was six and his clergyman’s father moved the family to Somerville, where the youngster excelled in academics and sang in church.

Star Athlete and Academic
When he was 17, Robeson earned a scholarship to attend Rutgers University, the third African American to do so and became one of the institution’s most decorated students. He received top honors for his debate and oratory skills, won 15 letters in four varsity sports, was elected Phi Beta Kappa, and became his class valedictorian.

From 1920 to 1923, Robeson attended Columbia University’s Law School, teaching Latin and playing pro football on the weekends to pay tuition. In 1921, he wed fellow Columbia student, journalist Eslanda Goode. The two would be married for more than 40 years and have a son together in 1927, Paul Robeson Jr. Robeson briefly worked as a lawyer in 1923 but left after encountering severe racism at his firm. With the encouragement of Eslanda, who would become his manager, he turned fully to the stage.

Early Roles: ‘All God’s Chillun’ and ‘Emperor Jones
Robeson made a splash in the theater world as the lead in the controversial 1924 production of All God’s Chillun Got Wings in New York City, and the following year, he starred in the London staging of Emperor Jones — both by playwright Eugene O’Neill. Robeson also entered film when he starred in African American director Oscar Micheaux’s 1925 work, Body and Soul.

‘Show Boat’ and ‘Ol’ Man River
Although he was not a cast member of the original Broadway production of Show Boat, an adaptation of an Edna Furber novel, Robeson was prominently involved in the 1928 London production. It was there that he first earned renown for singing “Ol’ Man River,” a song destined to become his signature tune.

‘Borderline,’ ‘Othello’ and ‘Tales of Manhattan’
In the late 1920s, Robeson and his family relocated to Europe, where he continued to establish himself as an international star through big-screen features such as Borderline (1930). He starred in the 1933 movie remake of Emperor Jones and would be featured in six British films over the next few years, including the desert drama Jericho and musical Big Fella, both released in 1937. During this period, Robeson also starred in the second big-screen adaptation of Show Boat (1936), with Hattie McDaniel and Irene Dunne.

Robeson’s last movie would be the Hollywood production of Tales of Manhattan (1942). He criticized the film, which also featured legends like Henry Fonda, Ethel Waters, and Rita Hayworth, for its demeaning portrayal of African Americans. Having first played the title character of Shakespeare’s Othello in 1930, Robeson again took on the famed role in the Theatre Guild’s 1943-44 production in New York City. Also starring Uta Hagen, as Desdemona, and José Ferrer, as the villainous Iago, the production ran for 296 performances, the longest-running Shakespeare plays in Broadway history.

Activism and Blacklisting
A beloved international figure with a huge following in Europe, Robeson regularly spoke out against racial injustice and was involved in world politics. He supported Pan-Africanism, sang for Loyalist soldiers during Spain’s civil war, took part in anti-Nazi demonstrations, and performed for Allied forces during World War II. He also visited the Soviet Union several times during the mid-1930s, where he developed a fondness for Russian folk culture. He studied Russian, as did his son, who came to reside in the capital city of Moscow with his grandmother.

Yet Robeson’s relationship with the U.S.S.R. became a highly controversial one, his humanitarian beliefs seemingly contrasting with the state-sanctioned terror and mass killings imposed by Joseph Stalin. In the United States, with McCarthyism and Cold War paranoia looming large, Robeson found himself contending with government officials looking to silence a voice who spoke out eloquently against racism and had political ties that could be vilified.

Fueled by the misrepresentation of a speech the actor made at the U.S.S.R-backed Paris Peace Conference in the late 1940s, Robeson was labeled a communist and was staunchly criticized by government officials as well as some African American leaders. He was ultimately barred by the State Department from renewing his passport in 1950 to travel abroad for engagements. Despite his immense popularity, he was blacklisted from domestic concert venues, recording labels, and film studios and suffered financially.

Later Years, Book & Death
Robeson published his autobiography, Here I Stand, in 1958, the same year that he won the right to have his passport reinstated. He again traveled internationally and received a number of accolades for his work, but the damage had been done, as he experienced debilitating depression and related health problems.

Robeson and his family returned to the United States in 1963. After Eslanda’s death in 1965, the artist lived with his sister. He died from a stroke on January 23, 1976, at the age of 77, in Philadelphia, Pennsylvania.

Paul Robeson’s Legacy
In recent years, efforts have been made by various industries to recognize Robeson’s legacy after a period of silence. Several biographies have been written on the artist, including Martin Duberman’s well-received Paul Robeson: A Biography, and he was inducted posthumously into the College Football Hall of Fame. In 2007, Criterion released Paul Robeson: Portraits of the Artist, a box set containing several of his films, as well as a documentary and booklet on his life.