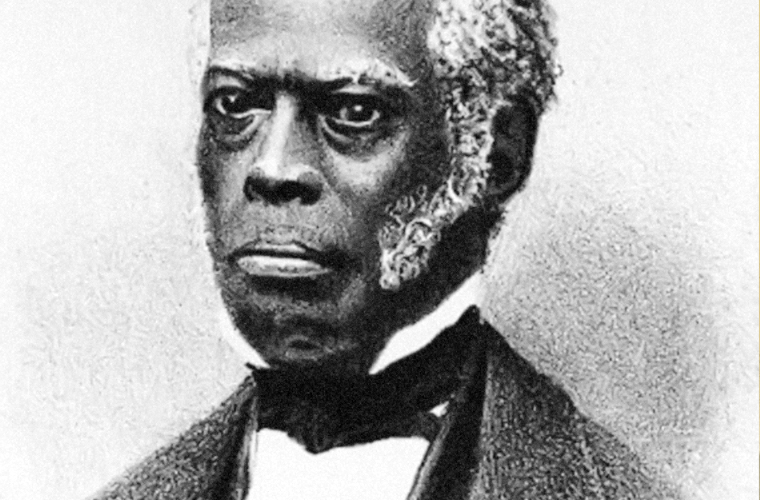 Born just outside of Raleigh, North Carolina on May 30, 1803, Lunsford Lane exhibited entrepreneurial talent as a child and a determination as an adult to buy his freedom.  He is most famous for writing a slave narrative that included descriptions of his business activities while in bondage and his troubles securing his and his family’s freedom.

The only child of house slaves Edward and Clarissa Lane, Lunsford Lane was also a domestic servant of the Sherwood Haywood family of Raleigh.  As a result of his domestic servitude, Lane interacted daily with whites and had opportunities and liberties that field slaves never had.  As he stated in his 1842 autobiography, The Narrative of Lunsford Lane, Formerly of Raleigh, N.C., Embracing an Account of His Early Life, the Redemption by Purchase of Himself and Family from Slavery, And His Banishment from the Place of His Birth for the Crime of Wearing a Colored Skin, “I bless heaven . . . that I was not born a plantation slave.”  Limited opportunities coupled with entrepreneurial ability enabled Lane to start a successful business and buy his freedom.  Yet economic success reminded him that bondage prevented greater success and that most whites would never consider him an equal.

In his narrative, Lane seemed grateful that he lived with a genuinely paternalistic master, yet as a child, Lane still feared being sold from his mother and father.  This childhood worries no doubt influenced his dogged determination as an adult to purchase his family and ensure that his children would never be without family.

His entrepreneurial career started with the selling of a basket of peaches given to him by his father.  After that, young Lunsford constantly planned ways to make and save money. Somehow, Lane mastered the arts of business negotiation and finding a bargain.  He saved tips from the Haywoods’ houseguests and chopped and sold wood.  His greatest economic success came as a tobacconist.  With the help of his father, Lane sold pipes and developed special tobacco with a “peculiarly pleasant flavor.”  In Raleigh, state legislators soon sought out the “Edward and Lunsford Lane” brand; eventually, customers in Fayetteville, Chapel Hill, and Salisbury bought it.  This achievement is extraordinary considering Lane worked primarily as a slave by day and for-profit only at night. Lane worked constantly, for he was obsessed with making money because he was obsessed with purchasing his freedom.

After marrying Martha Curtis in 1828, making money was harder.  Within a year of marriage, Lunsford and Martha had their first child, and while in bondage they had six more (one more was born after the Lane family moved North in the early 1840s).  Lunsford now worked to purchase and provide for his family.  To make matters worse, Martha’s master, probably knowing how industrious and conscientious her husband was, stopped providing for Martha.  Undaunted, Lane continued making pipes and selling tobacco.  By 1835 he was able to purchase his freedom for $1,000 and shortly afterward agreed to purchase his family for $2,500 (estimated by the Federal Reserve to be approximately $45,531 in 2005 dollars).

But since the courts of North Carolina deemed that Lane had done nothing meritorious to earn freedom, Lane was still legally a slave.  He remained so until, accompanying a white friend on a business trip to New York, Lane petitioned for and obtained freeman status.  On his return to North Carolina, Lane continued selling quality tobacco and even secured a job in the Governor’s office as a handy-man.

Meanwhile, Lane received horrible news.  Since he had lived in New York temporarily, he fell victim to selected enforcement of a statute forbidding free blacks from another state to stay in North Carolina for more than twenty days.  Lane petitioned influential whites, including the governor, to allow him to stay. Lane, however, was forced to leave in 1841.  In his narrative, Lane lamented that his only sin was to remain in the “place of my birth.”

Living up North, he earned money and the moral and financial support of abolitionists.  In 1842, he returned to Raleigh to emancipate his wife and children.

Once in his hometown, he received a most unfriendly welcome.  At first, he was arraigned for delivering abolitionist lectures, but these charges did not stand.  But the angry mob was not easily appeased, for Lane’s presence and economic success disproved assumptions of white racial superiority.  To save him from the rabble, a white friend escorted Lane to the jail, where he waited and left only after he thought hot tempers had cooled.  Angry whites nevertheless captured and dragged the free black into the woods for a tar and feathering.  Ironically, some in the mob were former friends, who visited Lane the next day and helped him escape town.

With the help of whites and a little subterfuge, Lane and his family fled Raleigh.  Lane’s mother also joined them (Lane had persuaded the Haywood family to manumit her).  The Lane family lived afterward in several Northern cities (Lunsford’s father was later manumitted, too).  Lunsford continued his industrious ways, developing dietary supplements and working as a fundraiser for local churches and charities.