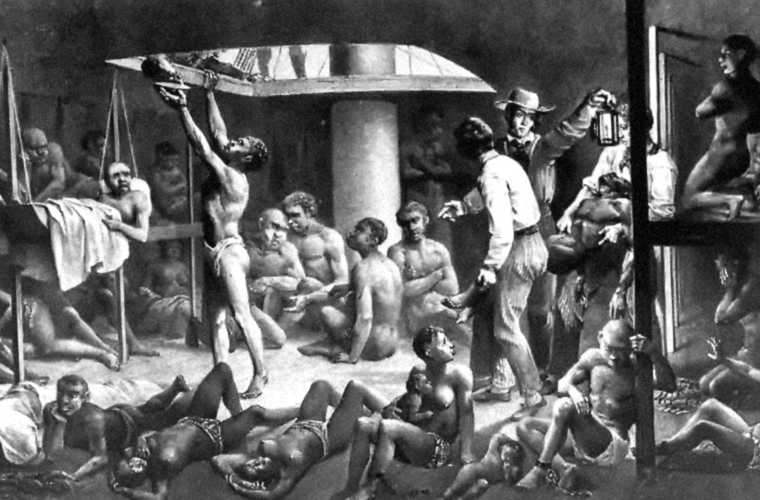 Of the 12.5 million Africans loaded onto 35,000 Atlantic ships by American and European slave traders, few left personal written accounts of their ordeal. Some of their life experiences were described as entries in the voluminous commercial papers of those involved in the slave system and are remembered mainly by the way their lives were recorded by their captors and tormentors. As a result, their stories have remained largely hidden behind the statistics—their monetary value, their gender and age distributions, their physical condition, their health and death, and their tragic numbers.

Yet we know a great deal about those who suffered upon Atlantic slave vessels and their transfer from shore to ship, their incarceration—often for months at a time—in the floating prisons on the African coast, and their daily regime in the ships during what must have seemed an interminable crossing. For a week after miserable week, African captives were effectively lost at sea. They were stranded, they knew not where, and were subject to a shipboard regime designed to keep them subdued and alive until the ship made landfall in the Americas. These weeks at sea were defined by fetid holds tight-packed with people, high levels of nausea and sickness, and random and often cavalier acts of brutality, and in the case of one out of every ten slave ships, outbursts of resistance and violence. Slave ships were a stew of human misery and terror.

These were the defining experiences of all Africans crossing the Atlantic—for those eleven million who survived to landfall, and the million and more who did not survive. The most famous description of the Middle Passage is that of Olaudah Equiano. Doubts persist about his place of birth, but his account, perhaps the memory of his African parents repeated to their son, is the closest we have to a graphic first-hand re-creation of life in the slave holds. Equiano wrote, “I was soon put down under the decks, and here I received such a salutation in my nostrils as I had never experienced in my life: so that, with the loathsomeness of the stench, and crying together, I became so sick and low that I was not able to eat, nor had I the least desire to taste anything.” Indeed, slave ships were so notorious for their stench of bodily fluids, excrement, and human waste, that sailors often detected nearby vessels not from sight but from their odor, which the Atlantic winds carried for miles.

Despite the odds, enslaved Africans regularly tried to free themselves from the slave ship and crew. Shipboard revolts were common, especially while the ships were anchored on the coast of Africa, though few succeeded. Over time, shipbuilders and captains designed and organized the sailing vessels to deal with possible African resistance. The captain and crew were constantly alert for signs of revolt. When a mutiny erupted, the crew used extreme violence to suppress African captives. Those who rebelled were savagely punished by the crew, and ringleaders were usually killed in front of the other Africans, then cast overboard to the sharks. Ironically, the loss of Africans to revolt, punishment, torture, or illness could be compensated by the Western European insurance companies invested in the Atlantic trade. Slave traders declared the captive men, women, and children to be a commodity—or human “cargo”—with a monetary value placed on their lives as slaves. For four centuries, European and American governments created and enforced laws that established that enslaved African people were the legal property of their owners.

African captives greatly outnumbered the slave ship crew. Therefore, slave traders devised severe regimes to maintain control. Without the use of chains and manacles, guns and a draconian regime, the handful of sailors would have faced far more challenges from their captives. Slave ship captains and crew developed their own distinctive routines: how to marshal and control the captives, how and when to feed and exercise them. When weather permitted, the crewmen brought batches of chained African men on deck for exercise. Even so, the Africans’ experience was defined overwhelmingly by imprisonment below decks, shackled in ranks, and fed communally.

Women and children were often allowed a degree of mobility compared to the bonded men. Without any legal protection, however, African women and children were without defense against crewmen who regularly abused and raped them during the voyage to the Americas. Moreover, shipboard conditions created the environment for contagious sicknesses, notably the “bloody flux” (dysentery), which infected the captives, killing many and reducing others to a wretched state. Some individuals resisted the horrors of the Middle Passage the only way they could, through starvation and suicide.

The true death rate for Africans transported to the Americas was much higher than the approximately one million that died during the Middle Passage. It included those who died in Africa when their communities were attacked, followed by the march to the coast, and those who died shortly after arriving in the Americas. Indeed, the Middle Passage was but one of many horrific journeys experienced by enslaved Africans along their forced migration from home to a new life of bondage in the Americas. Countless captives died along African slave routes through deserts, forests, or interior waterways before reaching European forts, castles, or barracoons on the West or Central African coast—weeks, months, or even years after their initial capture.

Though the great majority of Africans survived the crossing, more than one million died during the Middle Passage. Many men, women, and children survivors stepped ashore weakened and often gravely ill. In the first three years ashore in Brazil and the Caribbean, the high death rates likely were due more to the victims’ experience on the ship and in Africa than to live in the Americas.

The Middle Passage did not complete the forced journey of African captives. From points of arrival in American port cities, captives were subsequently taken over land or water on lengthy passages that delivered survivors to the mines, fields, and houses of their New World owners. For many Africans who survived the Atlantic journey only to labor in harsh conditions in the Americas, perhaps it seemed that the Middle Passage never completely ended.