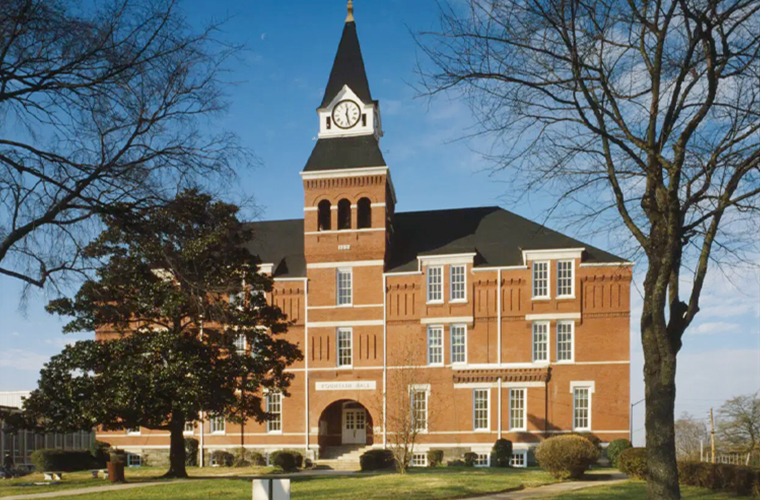 Founded in 1881 by the African Methodist Episcopal Church (AME Church), Morris Brown College is a private, four-year liberal arts school in Atlanta. It is the only institution of higher learning in Georgia organized for and by African Americans. A number of the school’s former students have enjoyed prominence in professional and public life, including civil rights leader Hosea Williams, writers John Oliver Killens and James Alan McPherson, former Atlanta Gas Light Company president Isaac Blythers, and artist Emma Amos. Soul singer Gladys Knight sang as a child with the Morris Brown choir in the early 1950s.

Founding and Early History
According to the school’s historians, the impetus for Morris Brown’s formation lay in an appeal made by trustees from neighboring Clark College (later Clark Atlanta University) to members of Atlanta’s Big Bethel AME Church. Church members were considering the trustees’ request for financial assistance in furnishing a room in a recently constructed campus building when Steward Wylie, a Big Bethel officer, proposed a bold alternative: “If we can furnish a room at Clark College, why can’t we build a school of our own?”

Wylie’s notion took hold with church officials, particularly the Reverend Wesley John Gaines, who enlisted support from delegates attending the North Georgia Annual Conference of the AME Church in January 1881. The Georgia Conference of the AME Church pledged its support only a few weeks later, and on February 1, 1881, trustees from both organizations purchased a tract of land on the corner of Boulevard and Houston streets in Atlanta’s Old Fourth Ward neighborhood. After three years of fund-raising, church officials broke ground on Gaines Hall, named in honor of Gaines, and the school received its charter from the state on May 23, 1885.

On October 15, 1885, Morris Brown, named the second bishop of the AME Church, opened its doors to 107 students representing a broad array of ages and grade levels. Without the benefit of outside funding, the school relied largely on small donations but nonetheless survived the lean years that followed its founding. To prepare students for ministerial careers in the AME Church, Morris Brown opened a theology department in 1894, which became the Turner Theological Seminary in 1900. The seminary’s name honors Henry McNeal Turner, a pioneering AME Church organizer. Turner Seminary remained affiliated with Morris Brown until 1957 when it joined the Interdenominational Theological Center. Turner obtained an independent charter in 1975.

Twentieth-Century Expansion
Morris Brown enjoyed a period of substantial growth during the first two decades of the twentieth century, adding academic societies and athletic competition to a growing list of extracurricular offerings, and by 1908 the school boasted an enrollment of nearly 1,000 students. It continued to offer instruction in industrial trades as well as academic fields and awarded two-year degrees in addition to four-year bachelor’s degrees, but over time administrators placed greater emphasis on the development of the school’s college-level curriculum.

In 1912, amid the school’s rapid growth, administrators petitioned the state for an amendment to the school’s charter, changing its incorporated name to “Morris Brown University.” State officials approved the school’s request, recognizing Morris Brown University as a corporate body and granting it authority over the college and seminary in Atlanta as well as over two satellite branches, Payne College in Cuthbert and the Central Park Normal and Industrial Institute in Savannah.

When coupled with unsound financial practices, the school’s expansion took a toll on its financial health, and Morris Brown entered a period of insolvency during the 1920s. Debts mounted over the course of the decade, and in 1928 the school was forced to undergo involuntary bankruptcy.

The task of restoring the school’s financial health fell to Reverend W. A. Fountain Jr., the school’s seventh president, who took office in the fall of 1928. To cut costs, Fountain closed the school’s satellite campuses and discontinued all secondary instruction while also imploring donors to increase their financial contributions. In 1929 Payne College and Central Park Normal and Industrial Institute closed, and the university system was subsequently dissolved.

Though still recovering financially, Fountain recognized a rare opportunity to provide for the school’s future growth just four years after emerging from bankruptcy. In 1932, when neighboring Atlanta University vacated its original campus, Fountain persuaded the school’s trustees to allow Morris Brown to occupy the university’s former grounds in the West End neighborhood of Atlanta. As Morris Brown’s finances improved over the next ten years, its trustees made regular payments to Atlanta University to secure ownership of the school’s former campus.

In addition to reversing the school’s financial woes and securing a larger campus for its expansion, Fountain recruited a bevy of new faculty members and instituted important curricular reforms during his twenty-two years as president. Despite those accomplishments, the school’s trustees dismissed Fountain in 1950 amid allegations of financial improprieties.

Upon taking office, Fountain’s successor, John H. Lewis, ordered a complete review of the college’s resources by an independent panel of academic experts. Their findings resulted in a number of reforms, including modernization of science laboratories, an expansion of the school’s library holdings, and the construction of additional dormitory space for female students.

After an ambitious and successful fund-raising campaign, Morris Brown embarked on yet another period of expansion in 1965, purchasing additional land and constructing a new student union facility as well as a new home for the science and language departments.

Morris Brown and the Atlanta University Center
Morris Brown’s twentieth-century expansion relied in large part on its membership in the Atlanta University Center (AUC), an innovative consortium of the area historically Black colleges and universities founded in 1929. Following its financial recovery, Morris Brown joined the AUC in 1941 and thereafter benefited from faculty exchanges, collaborative academic programs, and expanded course offerings.

The school remained a member in good standing until 1973, when administrators withdrew Morris Brown from the AUC to protest a reorganization plan that, according to its critics, required member schools to cede too much autonomy. Within a matter of months, however, it became apparent that Morris Brown’s accreditation depended upon its access to the AUC library and other membership privileges forfeited by the school’s withdrawal. As a consequence, Morris Brown applied for and received, readmission to the AUC later that year.

When Dolores Cross, the college’s first female president, arrived on campus in 1999, Morris Brown was again tottering on the brink of financial ruin. To shore up the school’s finances, President Cross embezzled millions of dollars in federal student aid and Pell grants, which were then diverted to cover operating expenses and the school’s mounting debt. The school’s accounting practices resulted in a public scandal when they were discovered in 2002, and authorities revoked Morris Brown’s accreditation, making it ineligible for membership in the AUC. Cross and the school’s financial aid director, Parvesh Singh, pled guilty to fraud charges in 2006.

Enrollment plummeted in the wake of the school’s accounting scandal, and a majority of Morris Brown’s professors were forced to look elsewhere for work. At its peak, enrollment reached more than 2,700, but by the fall of 2007, only 72 students and 10 faculty members remained. Despite its difficulties, however, Morris Brown continued to welcome new students and administrators, including interim president (later president) Stanley Pritchett, who pledged to restore the school’s accreditation by paying down the school’s $30 million debt, including nearly $10 million owed to the U.S. Department of Education.

In 2008 the college publicly struggled to restore water to the campus when unpaid bills resulted in the loss of service. The following year it lost a classroom building, Frederick D. Jordan Hall, to foreclosure. Despite these challenges, instruction continued at Morris Brown, and in 2010 enrollment stood at approximately 120 students. In 2011 the college reached an agreement with the U.S. Department of Education to pay back $500,000 of its $9.4 million debt, with the remainder being forgiven. In 2012 the college filed for Chapter 11 bankruptcy.

Campus Architecture
Morris Brown’s campus has many notable structures. Stone Hall (1882), designed by architect G. L. Norrman in the Queen Anne style, was originally part of the Atlanta University campus and is designated a National Historic Landmark. After Morris Brown occupied the building, the name was changed to Fountain Hall in honor of the former Morris Brown president. In 2010 Morris Brown announced a partnership with the Georgia Trust for Historic Preservation to rehabilitate the historic building, which had fallen into disrepair.

The John H. Lewis Health, Physical Education, and Recreation Building, named for the former Morris Brown president, was designed by architect J. W. Robinson. During the 1996 Olympic Games in Atlanta, Herndon Stadium (named for Atlanta businessman Alonzo Herndon) on the Morris Brown campus hosted the field hockey competition. In the early 2000s the Atlanta Beat, a professional women’s soccer team, played at the stadium. Filmmakers used Herndon Stadium for the movie We Are Marshall (2006), about the Marshall University football team.