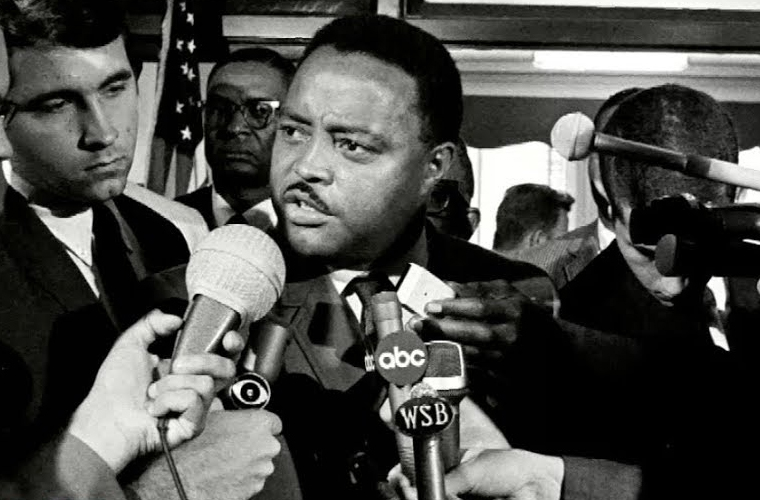 Hosea Williams was Martin Luther King Jr.’s trusted officer of the SCLC during the Civil Rights Movement, and later led Georgia’s biggest civil rights march. Hosea Williams was born January 5, 1926, in Attapulgus, Georgia. He joined the NAACP in 1952 and the SCLC in 1964. He played a leadership role in the 1965 March to Montgomery. In 1974, he was elected to the Georgia State Assembly. In 1987, he led Georgia’s biggest march, to Forsyth County. In 1996 he led a march to protest Georgia’s state flag. He died on November 16, 2000, in Atlanta, Georgia.
Civil rights activist Hosea Williams was born in Attapulgus, Georgia, on January 5, 1926. When Williams’s mother died giving birth to his younger sister, the two children went to live with their grandparents. When Williams was 14, however, he was forced to flee his grandparents’ farm to avoid being lynched for befriending a white girl. After three years working various jobs in Tallahassee, Florida, he returned home and made an unsuccessful attempt at running the farm.At the advent of World War II, Williams joined the U.S. Army and served in an all-black unit under General George S. Patton. He was wounded during combat in Germany, and after a yearlong recovery period at a military hospital in England, he was sent home with the Purple Heart. At age 23, Williams completed his high school education and enrolled at Morris Brown College in Atlanta, from which he earned his bachelor’s degree in chemistry.

In the early 1950s, after earning a master’s degree from Atlanta University, Williams worked as a research chemist for the U.S. Department of Agriculture and was also ordained as a minister. During this time, Williams wed Juanita Terry as well. The couple would have five children together and would adopt an additional four.

Williams first became active in the Civil Rights Movement in 1952, when he joined the Savannah chapter of the National Association for the Advancement of Colored People. Williams was motivated to join the NAACP after nearly being killed for using a whites-only water fountain.In 1964, Williams joined the Southern Christian Leadership Conference. As one of Martin Luther King Jr.’s most trusted officers of the SCLC, Williams helped conduct black voter registration drives in the Freedom Summer of 1964. On March 7, 1965, Williams also played a leadership role in the March to Montgomery, which was cut short by police brutality and would come to be known as Bloody Sunday. The highly publicized event ultimately prompted PresidentLyndon Johnson to sign the Voting Rights Act. Also in 1965, King appointed William president of the SCLC’s Summer Community Organization and Political Education.

During the late 1960s, at King’s urging, Williams collaborated with the Coordinating Council of Community Organizations on the Chicago Campaign. In 1968, he returned to the South as field director for the SCLC’s Poor People’s Campaign, and in April of that year witnessed King’s devastating assassination. In the 1970s, Williams was elected executive director of the SCLC.

Williams founded the Hosea Feed the Hungry and Homeless Food international aid organization in 1971. HFTH has since donated billions of dollars of food, medical and educational supplies to recipients in Georgia, Uganda, the Philippines and the Ivory Coast.In 1974, Williams won election to the Georgia State Assembly. He remained a representative for the next decade, until he resigned and his wife took over his seat. From 1985 to 1990, Williams was a member of the Atlanta City Council. From 1990 to 1994, he served as DeKalb County commissioner.
In 1987, Hosea Williams was responsible for leading Georgia’s most sizable civil rights march, during which some 20,000 protestors boldly withstood racial slurs and physical violence from white supremacist counter-demonstrators in the all-white Forsyth County. Williams additionally led a 1996 march to the Georgia state capitol to protest the Confederate symbol depicted on Georgia’s state flag.Four years later, on November 16, 2000, Hosea Williams died of kidney cancer in Atlanta, Georgia.
previous post