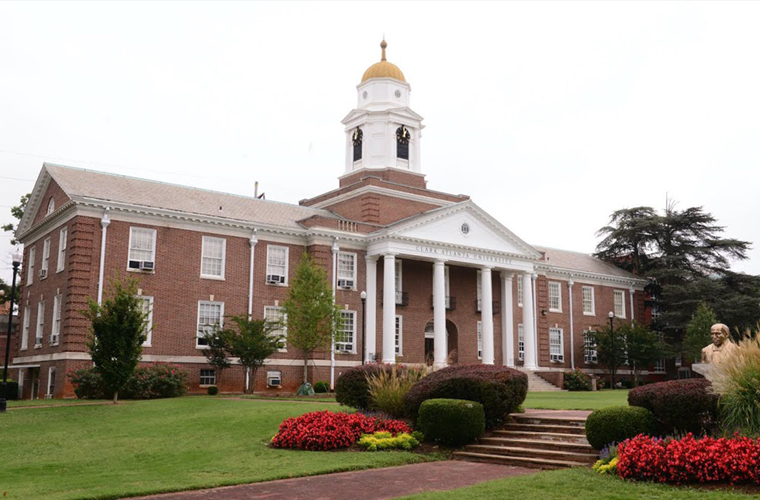 Clark Atlanta University (CAU), located southwest of downtown Atlanta, is a private, urban, coeducational institution of higher education. Fully accredited by the Southern Association of Colleges and Schools, the university offers undergraduate, graduate, and professional degree and non-degree programs to students of diverse racial, ethnic, and socioeconomic backgrounds. CAU is one of only two private, historically Black universities in the United States that award a doctorate in more than five disciplines.

CAU was formed by the consolidation of Atlanta University and Clark College. In 1987 the boards of trustees of the two parent institutions authorized an exploration of the possible advantages of closer working arrangements, and in 1988 the joint committee submitted its report for ratification, recommending that the two schools be consolidated as one institution. On June 24, 1988, both boards agreed to the consolidation recommendation, and on July 1, 1988, CAU was established. It inherited the rich traditions of two independent institutions, which were connected over the years by a common heritage, commitment, consortia relationships, and location.

The Atlanta University and Clark College Heritage
Before consolidation Atlanta University, founded in 1865, was the nation’s oldest graduate institution serving a predominantly African American student body. By the late 1870s, the university had begun granting bachelor’s degrees and supplying Black teachers and librarians to public schools across the South. In 1929-30, under the direction of college president John Hope, it began offering graduate education in the liberal arts and in the social and natural sciences. Gradually professional programs in social work, library science, and business administration were added. During the same period, Atlanta University affiliated with Morehouse and Spelman colleges to form the Atlanta University System. The campus was moved to its present site, and the modern organization of the Atlanta University Center emerged, with Clark College, Morris Brown College, and the Interdenominational Theological Center joining the affiliation later.

The story of Atlanta University from 1930 through 1950 includes several noteworthy developments. The Schools of Library Service (later the School of Library and Information Studies), Education, and Business Administration were established in 1941, 1944, and 1946 respectively. In 1947 the Atlanta School of Social Work, long associated with the university, became an integral part of the school, and in 2001 it was renamed the Whitney M. Young Jr. School of Social Work. In 1994 the School of International Affairs and Development, which now operates within the School of Arts and Sciences, admitted its first students.

Clark College was founded in 1869 by the Freedman’s Aid Society of the Methodist Episcopal Church (MEC), which later became the United Methodist Church. The school was named for Bishop Davis W. Clark, the first president of the Freedman’s Aid Society and a MEC bishop. A room in Clark Chapel, which was a Methodist Episcopal Church in Atlanta’s Summerhill section, housed the first Clark College class. In 1871 the school relocated to a new site on the newly purchased Whitehall and McDaniel streets property, and in 1877 it was chartered as Clark University.

Bishop Gilbert Haven, an early benefactor, saw Clark as the university of all the Methodist schools founded for the education of freedmen. Clark was founded to set a standard for other MEC educational institutions for African American youth. Bishop Haven was instrumental in acquiring 450 acres in south Atlanta, and after several changes in location, the institution moved there in 1883. Also in 1883, Clark established the Gammon School of Theology, named in honor of Elijah H. Gammon, which in 1888 became an independent theological seminary and is now part of the Interdenominational Theological Center.

Over the years many distinguished scholars have taught at Atlanta University and Clark College. Among the most famous was W. E. B. Du Bois, the twentieth-century African American activist who founded Crisis magazine and Phylon, a review of race and culture. The artist Hale Woodruff established an exhibition series at Atlanta University that became the premier event for African American artists and began assembling the university’s African American art collection. Dennis Kimbro, a motivational speaker, wrote Think and Grow Rich: A Black Choice. Other well-known faculty members have included J. Ernest Wilkins, Distinguished Professor of Applied Mathematics and Mathematical Physics; Horace Mann Bond, dean of the School of Education and a noted writer; Virginia Lacy Jones, dean of the School of Library Service, who served as president of the Association of American Library Schools; Whitney M. Young Jr., dean of the School of Social Work; and Henry C. McBay, Callaway Professor of Chemistry.

Noted alumni include James Weldon Johnson, the nineteenth-century author, statesman, and composer; Henry O. Flipper, the first African American graduate of the U.S. Military Academy at West Point, New York (he attended Atlanta University for only one year); Louis Tompkins Wright, the first African American surgeon to head the Department of Surgery at Harlem Hospital in New York; Horace E. Tate, who oversaw the merger of the Black and white teachers’ associations in Georgia and was a state senator for many years; Judge Horace T. Ward, the first Black student to legally challenge segregation in higher education in the Deep South; Mary Frances Early, the first African American graduate of the University of Georgia; the civil rights leader Ralph David Abernathy; Marva Collins, an educator and the founder of the Westside Preparatory School in Chicago, whose innovative approaches to teaching at-risk youth have gained national recognition; Reatha Clark King, the former president of the General Mills Foundation; the writer Pearl Cleage; and Kenny Leon, the actor and former artistic director of Atlanta’s Alliance Theatre.

The Consolidated Clark Atlanta University
With nearly 3,500 students and 171 faculty members in 2015, CAU is the largest university in the Atlanta University System and the only one that grants graduate degrees. Although it is categorized as a historically Black institution, CAU is now widely known as a national university and is classified as a doctoral/research-intensive institution by the Carnegie Foundation for the Advancement of Teaching. Since its consolidation, CAU has had four presidents; Thomas W. Cole Jr. (1988-2002), who oversaw the consolidation process; Walter D. Broadnax (2002-2008); Carlton E. Brown (2008-2015); and the current president, Ronald A. Johnson (2015-present).

The influence of the university has been extended through professional journals and organizations, including Phylon and the National Association for the Advancement of Colored People, for both of which W. E. B. Du Bois, a member of the faculty, provided leadership; The Status of Black Atlanta, published by the university’s Southern Center for Studies in Public Policy (which also houses the W. E. B. Du Bois Institute); two annual lectureship series: the Julius C. Daugherty Lecture on Law and Government and the C. Eric Lincoln Lecture Series; the annual Writers Workshop, which brings celebrated authors to the campus; and the recently created Joseph E. Lowery Institute for Justice and Human Rights. The Clark Atlanta University Press operated between 1999 and 2003, publishing several important works on African American subjects.

A meaningful outgrowth of the consolidation of Atlanta University and Clark College was the establishment of the Clark Atlanta University Guild. It was founded in 1992 by Brenda Hill Cole, the wife of then-president Thomas Cole, to increase local awareness of the university’s contribution to the academic and cultural life of Atlanta, and to support a scholarship program for the Arts and Humanities Division of the School of Arts and Sciences. The guild’s primary fundraiser is the Jazz Under the Stars Concert, which has featured, among others, the performers Nancy Wilson, Wynton Marsalis, Roberta Flack, James Moody, and Roy Ayers. The guild’s annual concert has raised more than $1 million and awarded hundreds of scholarships to students in the arts and humanities. Guild members include women on the CAU faculty and staff, alumnae, community leaders, and business leaders.

CAU’s enduring mission is to produce graduates who have met standards of excellence in contemporary higher education, who are educated to be creative, and who have a perspective on the world and its people that commits them not only to excel in their professional careers and personal lives but also to seek new knowledge and solutions to the problems of humankind.