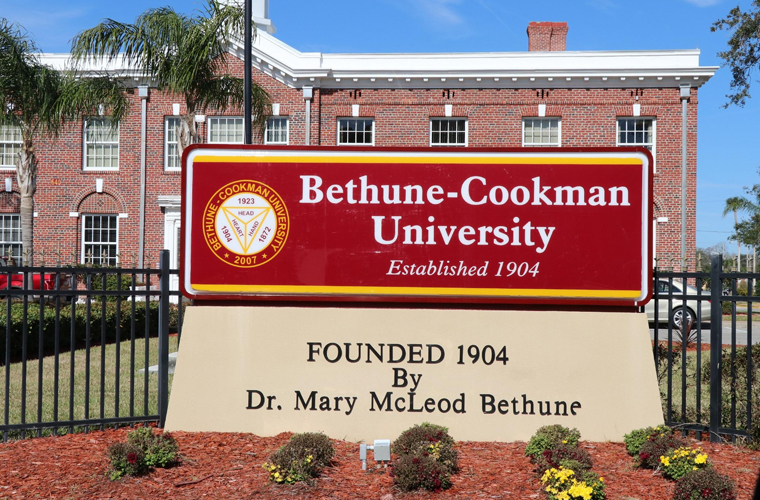 On October 3, 1904, a very determined young black woman, Mary McLeod Bethune, opened the Daytona Literary and Industrial Training School for Negro Girls with $1.50, faith in God, and five little girls: Lena, Lucille, and Ruth Warren, Anna Geiger and Celest Jackson. Through Dr. Bethune’s lifetime, the school underwent several stages of growth and development and on May 24, 1919, the Daytona Educational and Industrial Institute was changed to Daytona Normal and Industrial Institute. In 1923 the school merged with Cookman Institute of Jacksonville, Florida (founded in 1872) and became co-ed while it also gained the prestigious United Methodist Church affiliation. Although the merger of Bethune’s school and Cookman Institute began in 1923, it was not finalized until 1925 when both schools collaborated to become the Daytona-Cookman Collegiate Institute. In 1931, the College became accredited by the Association of Colleges and Secondary Schools of the Southern States, as a Junior College with class B status, and on April 27, 1931, the school’s name was officially changed to Bethune-Cookman College to reflect the leadership of Dr. Mary McLeod Bethune. 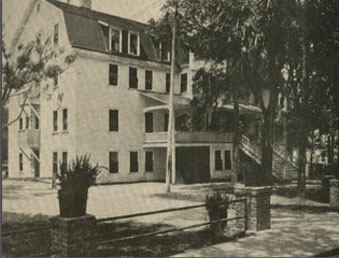 In 1936, Dr. Bethune was appointed an administrative assistant for Negro Affairs (her title changed in 1939 to Director of the Division of Negro Affairs) of the National Youth Administration (NYA) making her the first African American women to head a federal agency. As of result of this position, much-needed government funds were funneled into the school. While traveling with the NYA Dr. Bethune appointed Mr. Abram L. Simpson as acting president from 1937-39. In 1941, the Florida State Department of Education approved a 4-year baccalaureate program offering liberal arts and teacher education. Dr. Bethune retired in 1942 at which time James E. Colston became president until 1946 when Dr. Bethune resumed the presidency for a year.

During the tenure of Dr. Colston, he helped finalize the process of the State of Florida’s accreditation for the teacher’s education program and accreditation by the Southern Association of Colleges and Secondary Schools (SACS). The school became a charter member of the newly formed United Negro College Fund, which was created in 1943 by Dr. Bethune and Tuskegee Institute president Frederick Patterson. Lastly, he expanded the faculty and by 1945-46 the faculty had grown from nine at the beginning of his tenure to twenty-three, all of which were full time, with the exception of one.

Richard V. Moore, Sr. became the third president in 1947. During his tenure, which lasted until 1975, Dr. Moore led a significant expansion of academic programs offered by Bethune-Cookman College, creating new majors in Music, Physical Education, Pre-Medicine, Pre-Dental, and Pre-Pharmacy during his first year in office. B-CC also gained full membership in the SACS in 1960. Sixteen new buildings were constructed and/or renovated including the Carl Southwick Swisher Library, which was erected and dedicated during the 1970-71 school year. Enrollment also doubled during Dr. Moore’s tenure, with faculty increasing at commensurate levels.

Oswald P. Bronson, Sr., Ph.D., an alumnus of the College, served as the institution’s president for 29 years – from 1975 until 2004 when he was named president emeritus. Commitment to academic excellence was the cornerstone of his presidency. Under his leadership, major fields of study increased from 12 to 37. In addition, seven continuing education centers for students began operating throughout the state. While maintaining accreditation by SACS-COC, Florida State Board of Education, and The University Senate of The United Methodist Church Board of Higher Education, the college added new accreditations in the Nursing and the Teacher Education programs.

Trudie Kibbe Reed, Ed.D. was appointed to the presidency in August 2004. Dr. Reed was the first woman to serve as president since Dr. Mary McLeod Bethune and under her leadership, the institution launched its first Master’s degree program in 2006 and achieved university status in 2007. The University also expanded and improved the school’s physical plant with the purchase of nearby properties and construction, which included the Michael and Libby Johnson Center for Civic Engagement, the L. Gale Lemerand School of Nursing Building, Lee Rhyant Residential Life Center, and the Alexis Pugh Scholarship House. Lastly, during her nine-year tenure, Dr. Reed led successful efforts to increase enrollment and the University’s endowment, helping ensure the continued mission and financial stability of the institution.

After a one year interim position Dr. Edison O. Jackson became the 6th president of Bethune-Cookman University during his October 2013 inauguration. During his tenure, he has increased philanthropic giving to the University, maintained accreditations with SACS, the Florida State Board of Education, and the United Methodist Church Board of Higher Education. Dr. Jackson has also remodeled the dining hall, renovated Gertrude Heyn Memorial Chapel, and added four additional floors to the Harrison Rhodes Memorial Social Science Building.

Since 1943, Bethune-Cookman University (B-CU) has graduated more than 13,200 students. Traditionally, B-CU has maintained intercollegiate athletic programs and instrumental and choral groups that have achieved national recognition. Many alumni are employed in the fields of education, medicine, business, politics, government, science, religion, athletics, and environmental sciences.