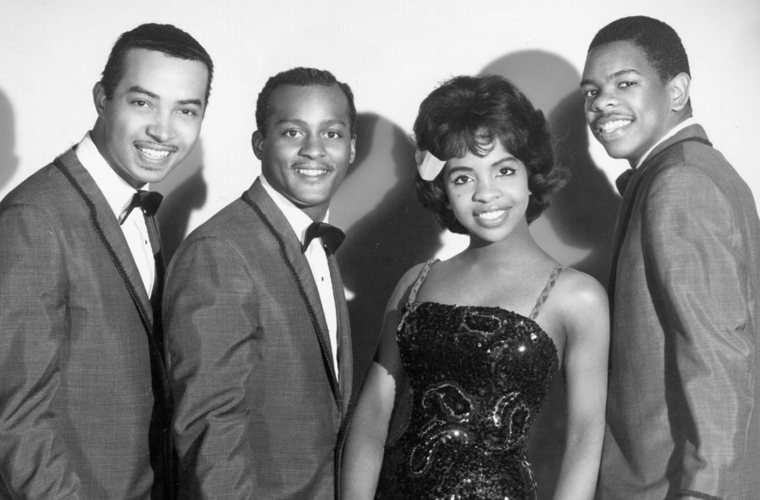 Gladys Knight began singing with her siblings at age 8, calling themselves “the Pips.” The group opened for R&B legends in the 1950s, then headed to Motown and crossed over to pop music. As Gladys Knight and the Pips, they recorded their signature song, “Midnight Train to Georgia.” Knight left the Pips behind in 1989 and continued to perform and record as a solo artist. Today, she’s known fondly as the “Empress of Soul.”

Early Years
Singer and actress Gladys Knight was born Gladys Maria Knight on May 28, 1944, in Atlanta, Georgia, and started out on the road to success at an early age. She made her solo debut at the age of 4, singing at the Mount Mariah Baptist Church in Atlanta, Georgia. Not long after, she won a prize for her performance on the televised Ted Mack Amateur Hour.

In 1952, an 8-year-old Knight formed “the Pips” with her brother and sister, Merald (“Bubba”) and Brenda, and two cousins, Elenor and William Guest (another cousin, Edward Patten, and Langston George later joined the group, after Brenda and Elenor left to get married; George left by 1960). With young Gladys supplying the throaty vocals and the Pips providing impressive harmonies and inspired dance routines, the group soon earned a following on the so-called “Chitlin Circuit” in the South, opening for popular acts such as Jackie Wilson and Sam Cooke.

The Pips
While their first single, “Whistle My Love,” was released by Brunswick in 1957, the Pips didn’t score a bona fide hit until 1961 when they released “Every Beat of My Heart.” But it was when the group began recording with Motown Records in the mid-1960s and were teamed with songwriter/producer Norman Whitfield, that their careers really took off. In 1967, the Pips’ version of Whitfield’s “I Heard it Through the Grapevine”—later a huge hit for Marvin Gaye—crossed over from the rhythm and blues charts to the pop charts. Their popularity increased with the success of singles like “Nitty Gritty,” “Friendship Train” and “If I Were Your Woman,” combined with touring performances with the Motown Revue and numerous TV appearances.

Knight and the Pips left Motown in 1973 for Buddah Records, a subsidiary of Arista (the group later took Motown to court for unpaid royalties). Ironically, their last Motown single, “Neither One of Us Wants to be the First to Say Goodbye,” became the Pips’ first No. 1 crossover hit and a Grammy winner for Best Pop Vocal Performance in 1973.

The group — now known officially as Gladys Knight and the Pips — was riding higher than ever during the mid-1970s with a smoother, more accessible sound, a hit album, Imagination (1973), and three gold singles: “I’ve Got to Use My Imagination,” “Best Thing That Ever Happened to Me” and the Grammy Award-winning No. 1 hit “Midnight Train to Georgia” (Best R&B Vocal Performance).

In 1974, the group recorded the soundtrack for the film Claudine, with songs written by Curtis Mayfield; the soundtrack album spawned the hit single “On and On.” Their next album, I Feel a Song (1975), included Knight’s hit version of Marvin Hamlisch’s “The Way We Were,” also popularized by Barbra Streisand; the album’s title track became a No. 1 soul hit.

Knight and the Pips hosted their own TV special in the summer of 1975, and in 1976, Knight made an appearance in the film Pipe Dreams, for which she and the Pips also recorded the soundtrack album. She later co-starred opposite comedian Flip Wilson on the 1985-86 sitcom Charlie & Co. Due to legal problems with Buddah, Knight and the Pips were forced to record separately in the last years of the 1970s, although they continued performing together in live gigs.

After signing a new contract with Columbia, the group released three reunion albums during the early 1980s, About Love (1980), Touch (1982), and Visions (1983), scoring hits with such singles as “Landlord” (produced by the ace songwriting team Ashford and Simpson), “Save the Overtime for Me” and “You’re Number One”.

Moving to MCA Records in 1988, Knight and the Pips released their final album together, All Our Love, which included the Grammy-winning single “Love Overboard.” The next year, Knight left the Pips to launch a solo career, recording the title song for the James Bond film Licence to Kill (1989) and the album A Good Woman (1990), which featured guest stars Dionne Warwick and Patti Labelle.

Later Projects
Throughout the 1990s, Knight continued to tour and record, producing the successful 1994 album Just For You and earning acclaim for her consistently strong vocals and hardworking performance style. In addition to her musical career, she also acted in a recurring role on the 1994 TV series New York Undercover. Knight has also appeared on Living Single and JAG. On the big screen, she had a role in Tyler Perry’s I Can Do Bad All By Myself in 2009.

While no longer a chart-topping success, Knight, known fondly today as the “Empress of Soul,” has continued to make records. She once stated, “Since I’ve been so wonderfully blessed, I really want to share and to make life at least a little better. So every chance I get to share the gospel or uplift people, I will take full advantage of that opportunity.” Knight collaborated with the Saints United Voices for her 2005 gospel album One Voice, which did well. Knight’s 2006 album Before Me also received a warm reception.

In 2012, Knight decided to take on another kind of role by joining the cast of Dancing with the Stars, the popular television competition, and strutting her stuff against the likes of actress Melissa Gilbert, actor Jaleel White, and TV personality Sherri Shepherd. Two years later, she released another studio album, the gospel-infused Where My Heart Belongs.

In early 2019, it was announced that Knight would sing the national anthem before Super Bowl LIII.
Personal Life and Spouses Knight married her first husband, an Atlanta musician named Jimmy Newman, at age 16. The marriage produced two children, James and Kenya, before Newman, a drug addict, abandoned the family and died only a few years later. Her second marriage, to Barry Hankerson, ended acrimoniously in 1979 after five years of a prolonged custody battle over their son, Shanga. Knight married to author and motivational speaker Les Brown in 1995; that marriage ended in 1997.

In addition to tumultuous love life, Knight suffered through a serious gambling problem that lasted more than a decade. In the late 1980s, after losing $45,000 in one night at the baccarat table, Knight joined Gamblers Anonymous, which helped her quit the habit.

Since 1978, Knight has lived in Las Vegas, close to her mother, Elizabeth, and two of her children and their families. She continues to perform frequently in Las Vegas and beyond, and published a memoir, Between Each Line of Pain and Glory: My Life Story, in 1997. With the Pips, she was inducted into the Rock and Roll Hall of Fame in 1996 and received a Lifetime Achievement Award from the Rhythm & Blues Foundation in 1998. In April 2001, Knight married William McDowell, a corporate consultant she had reportedly met 10 years earlier, but had only begun dating the previous January.