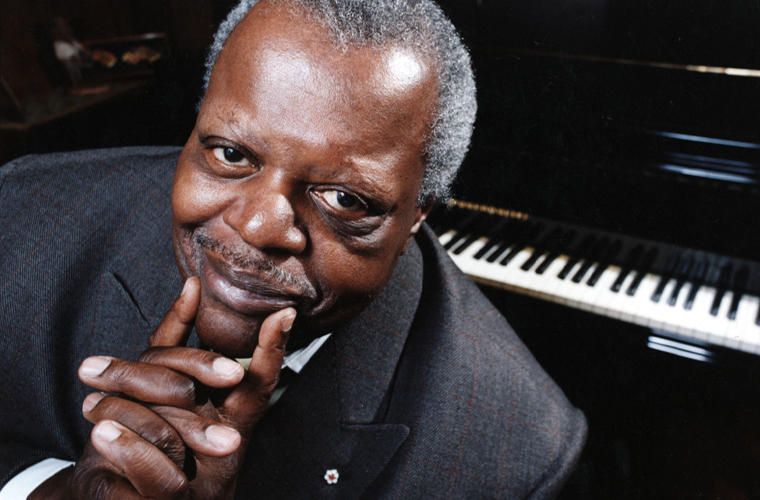 The word “virtuoso” can sometimes be bandied about too freely, but in the case of pianist Oscar Peterson, it is perfectly descriptive yet it’s been a source of criticism. Jazz critic Whitney Balliet once said in reviewing a live performance, “The ‘virtuoso’ sign flashed incessantly….”

Peterson enjoyed a long and successful career, winning many prestigious, international awards, including a concert hall named for him in his hometown. Born into a musical family in Montreal, Canada, on August 15, 1925, the fourth of five children, he left high school to become a professional musician with the admonition of his father “…not to be another piano player, but to be the best.”

His big break came when Norman Granz presented him at the 1949 Jazz at the Philharmonic in Carnegie Hall. The following year Peterson won the Down Beat reader’s poll, the first of several wins through 1967. By the late ‘50s, his was the highest-paid jazz trio in the world, according to Gene Lees, author of Oscar Peterson: The Will to Swing.

The first of the famous Peterson trios was comprised of bassist Ray Brown and guitarist Herb Ellis. They toured and recorded extensively under Granz who would be Peterson’s manager for over 30 years. Tired of the road, Ellis left after six years, and Peterson, feeling that the guitarist was irreplaceable, decided to hire a drummer. Ed Thigpen and Brown made up the second remarkable Peterson trio which, again, lasted for six years. Toward the end of 1965, the trio disbanded. After a 15-year musical partnership, Brown was ready to settle in California for a while, and Thigpen moved to Denmark. Peterson continued a rigorous performance schedule with stellar musicians such as guitarist Joe Pass, bassist Niels-Henning Orsted Pedersen, and Ella Fitzgerald.

During the sixties, Peterson played several private parties for German millionaire Hans Georg Brunner-Scher, who later released the tapes on his record label MPS. Peterson considers these solo albums among his best. Unfortunately, legal problems blocked the release of some of the recordings. In the meantime rock, ‘n’ roll overwhelmed the music industry, and a disgusted Granz decided to form his own label, Pablo, to record deserving jazz artists. One of the first releases in 1964 was The Oscar Peterson Trio: Live in Tokyo.

During his long career as an internationally respected pianist, Peterson exerted an influence on musicians beyond just pianists. What sets Peterson apart, says Lees, is his embodiment of “the vast emotional and technical range of the instrument… I consider him one of the greatest pianists not only in jazz history but in all musical history, from the time Bach tempered the keyboard.”

Peterson suffered a stroke in 1993 which damaged his left hand, but he determinedly came back to perform again. In 2005 he was honored with a commemorative stamp in Canada. He died on December 23, 2007.