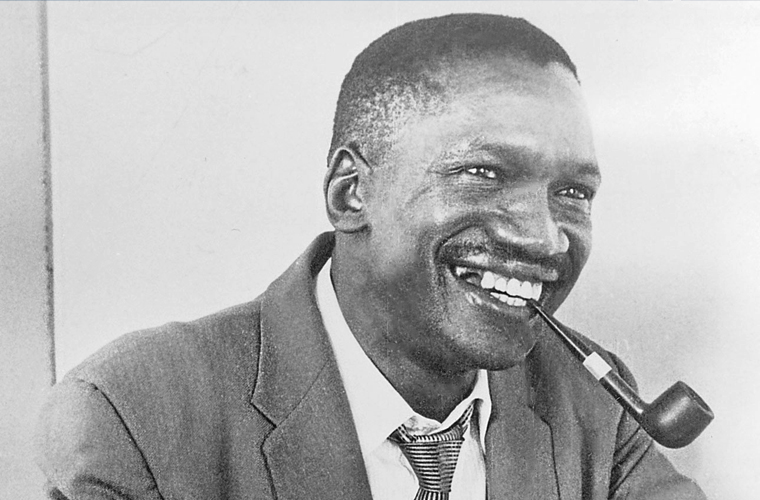 Robert Mangaliso Sobukwe was born to Hubert and Angelina Sobukwe on 5 December 1924 at Graaff-Reinet, Cape Province. He was the youngest of five boys and one girl. His father worked as a municipal laborer and a part-time woodcutter, his mother as a domestic worker and cook at a local hospital.

Sobukwe was exposed to literature at an early age by his oldest brother. His earliest education was at a mission school in Graaf Reinet. After completing Standard 6 he enrolled for a Primary Teachers’ Training Course for two years, but he was not given a teaching post. He then went back to high school, enrolling at the Healdtown Institute, where he spent six years studying with financial assistance provided by George Caley, the school’s headmaster and completed his Junior Certificate (JC) and matric. Sobukwe’s schooling was briefly interrupted in 1943 when he was admitted to a hospital suffering from tuberculosis.

After completing his schooling he received a bursary from the Department of Education and an additional loan from the Bantu Welfare Trust, which enabled him to enroll at Fort Hare University for tertiary education in 1947. Sobukwe registered for a BA majoring in English, Xhosa and Native Administration. His keen interest in literature continued and became more focused on poetry and drama.

Sobukwe noted that before going to Fort Hare, he was not very interested in politics. It was his study of Native Administration that aroused his interest in politics. This new focus was fuelled by the influence of one of his lecturers, Cecil Ntloko, a follower of the All African Convention (AAC). Fort Hare was also the institution in which generations of young Black South Africans and Black students from other African countries were exposed to politics. These influences combined to make Sobukwe more politically active.

In 1948 Sobukwe and three of his friends launched a daily publication called Beware. Topics appearing in the paper included non-collaboration and critiques of Native Representative Councils and Native Advisory Boards. That same year Sobukwe joined the  African National Congress Youth League (ANCYL), which was established on the university campus by Godfrey Pitje, a lecturer in the Department of African Studies who later became the league’s president. Sobukwe and his classmates were at first skeptical of the ANCYL because they felt that the African National Congress (ANC) had been compromised by its continuing participation in the Native Representative Council and the township Advisory Boards.

A year later, in 1949, Sobukwe was elected president of the Fort Hare Students’ Representative Council (SRC), where he proved himself to be an effective orator. His speech as outgoing president of the SRC in October 1949 established him as an important figure among his peers. In December he was selected by Pitje to become the National Secretary of the ANCYL. During this period he became influenced by the writings of Anton Lembede and he began adopting an Africanist position within the ranks of the ANC.  During 1949 Sobukwe met Veronica Mathe at Alice Hospital, where she was a nurse in training. The couple got married in 1950.

In 1950, Sobukwe was appointed as a teacher at Jandrell Secondary School in Standerton, where he taught History, English, and Geography. In 1952 he lost his teaching position after speaking out in favor of the Defiance Campaign. His dismissal, however, did not last long and he was soon reinstated. Although Sobukwe was secretary of the ANC’s Standerton branch from 1950 to 1954, he was not directly involved in mainstream ANC activities.

In 1954 Sobukwe moved to Johannesburg, where he became a lecturer in African Studies at the University of the Witwatersrand – a job which earned him the nickname ‘the Prof’. He settled in Mofolo, Soweto, where he joined a branch of the ANC. Sobukwe became editor of The Africanist in 1957 and soon began to criticize the ANC for allowing itself to be dominated by what he termed ‘liberal-left-multi-racialists’. In 1958 Sobukwe completed his Honours dissertation at Wits entitled “A collection of Xhosa Riddles”.

Politically, Sobukwe was strongly Africanist, believing that the future of South Africa should be in the hands of Black South Africans. As a result of his skepticism towards the multi-racial path the ANC was following, Sobukwe was instrumental in initiating an African breakaway from the ANC in 1958, which led to the birth of the Pan Africanist Congress (PAC). He stated:

“In 1955 the Kilptown Charter was adopted, which according to us, is an irreconcilable conflict with the 1949 Programme seeing that it claims to land no longer Africa, but is auctioned for sale to all who live in this country. We have come to the parting of the ways and we are here and now giving notice that we are disassociating ourselves from the ANC as it is constituted at present in the Transvaal.”

At the PAC’s inaugural congress, held in Orlando from 4 to 6 April 1959, Sobukwe was unanimously elected the party’s first President. Sobukwe’s eloquence as a public speaker, his intelligence and commitment to his cause soon established him as a natural leader and helped him rally support for the PAC. Sobukwe’s opposition to ‘multi-racialism’ in favor of ‘non-racialism’ is apparent in an extract from his inaugural speech at the PAC launch in 1959.

A week after the ANC announced its anti-pass campaign in December 1959, the PAC announced that it was planning to initiate a campaign against the pass laws with the aim to free South Africa by 1963. On 16 March 1960, Sobukwe wrote to the Commissioner of Police, Major General Rademeyer, stating that the PAC would be holding a five-day, non-violent, disciplined, and sustained protest campaign against pass laws, starting on 21 March. On 21 March 1960, at the launch of the PAC’s anti-pass campaign, Sobukwe resigned from his post as lecturer at the University of Witwatersrand. He made last-minute arrangements for the safety of his family and left his home in Molofo. He intended to give himself up for arrest at the Orlando Police Station in the hope that his actions would inspire other Black South Africans. Along the eight-kilometer walk to the police station, small groups of men joined him from neighboring areas like Phefeni, Dube and Orlando West. As the small crowd approached the station, most of the marchers, including Sobukwe, were arrested and charged with sedition. When an estimated group of 5000 marchers reached Sharpeville police station, the police opened fire killing 69 people and injuring 180 others in what became known as the Sharpeville Massacre.

An order was issued on 25 March 1960 for the banishment of Sobukwe to the Driefontein Native Trust Farm, Vryburg District, [Northern Cape, now North West Province].  At the time, Sobukwe was living in Mafolo Bantu Township, Johannesburg, Transvaal [now Gauteng].

The documentation on the banishment noted that Sobukwe and Leballo had both been arrested and were awaiting trial“ but it [was] necessary to have a banishment order in hand just in case they are released.” Sobukwe never spent time in banishment as he was sentenced to imprisonment for incitement.

On 4 May 1960, Sobukwe was sentenced to three years in prison for inciting Africans to demand the repeal of the pass laws. He refused to appeal against the sentence, as well as the aid of an attorney, on the grounds that the court had no jurisdiction over him as it could not be considered either a court of law or a court of justice. At the end of his three-year sentence on 3 May 1963, Parliament enacted a General Law Amendment Act. The Act included what was termed the ‘Sobukwe Clause’, which empowered the Minister of Justice to prolong the detention of any political prisoner indefinitely. Subsequently, Sobukwe was moved to Robben Island, where he remained for an additional six years. The Clause was never used to detain anyone else. The Sobukwe Clause was renewed every year – when it was due to expire on 30 June 1965, the government renewed it.

While on Robben Island, Sobukwe was kept in solitary confinement – his living quarters were separate from the main prison and he had no contact with any other prisoners. He was, however, allowed access to books and civilian clothes. As a result, Sobukwe spent much of his time studying, and he obtained a degree in Economics from the University of London. In 1964 Sobukwe was offered a job by the National Association for the Advancement of Coloured People and the Montgomery Fellowship for Foreign Aid in the US. He applied to leave the country with his family to take up the employment but was denied permission by the Minister of Justice, John Vorster.

Sobukwe was released from prison in May 1969 and was banished to Galeshewe in Kimberley, where he was joined by his family. However, he remained under twelve-hour house arrest and his banning order prohibited him from participating in any political activity. In 1970 Sobukwe successfully applied for a teaching post at the University of Wisconsin in the US, but the Apartheid government refused his request for a passport despite assurances that he would be given a visa by the US government. When he applied to leave South Africa permanently together with his family in 1971, the South African government again refused to give him permission.

While the restrictions kept him under house arrest and denied him permission to leaving South Africa, he was permitted to attend family gatherings outside Kimberley. For instance, in July 1973 Sobukwe was granted permission to leave Kimberley to visit his son Dalindyebo, who had been hospitalized in Johannesburg. In June 1974 Sobukwe spent three days in Johannesburg visiting his wife, who underwent an operation at a hospital in Johannesburg. Finally, in 1975, Sobukwe’s mother died and he applied to the Chief Magistrate of Kimberley for a permit to leave the town in order to attend the funeral. He was granted permission on condition that he report to the police station upon arrival and departure, and that he return to Kimberley by midnight on Friday 9 May 1975, a day after the funeral.

Sobukwe began studying Law while he was under house arrest. He completed his articles in Kimberley and established his own law firm in 1975. The government’s Department of Justice initially denied him permission to enter the courts, but reversed the decision and withdrew the prohibition after the government relaxed a clause that banned Sobukwe from entering a court of law except as an accused or as a witness. However, newspapers were not allowed to quote him when he argued in court.

Shortly after opening his law practice, Sobukwe fell ill. In July 1977 he applied for permission to go for medical treatment in Johannesburg. Benjamin Pogrund, a close family friend, intervened and on 9 September Sobukwe was allowed to leave Kimberley for Johannesburg under strict conditions. He was diagnosed with lung cancer and his condition was deemed serious. Consequently, Sobukwe was transferred to Groote Schuur hospital in Cape Town. While he was in the hospital the security branch instructed the medical staff not to permit any visitors to visit him except his family. Sobukwe’s wife applied for permission from the Cape magistrate for him to stay with a family friend, Bishop Pat Matolengwe. After deliberate delays by the government, on 14 October he was temporality discharged and Bishop Matolengwe took him from the hospital. Sobukwe was sent back to Kimberley, from he was due to travel back to Cape Town for another round of treatment. Each time he left Kimberley, he had to report to the police station – which he also had to do when he arrived at or left Cape Town.

The government deliberately made it harder for Sobukwe to receive treatment by insisting that he should comply with the conditions of his restrictions, despite his evidently failing health. On 27 February 1978 Sobukwe died from lung complications at Kimberley General Hospital. His funeral was held on 11 March 1978 and he was buried in Graaff-Reinet. Today, he remains a celebrated political figure in the struggle for a democratic South Africa.