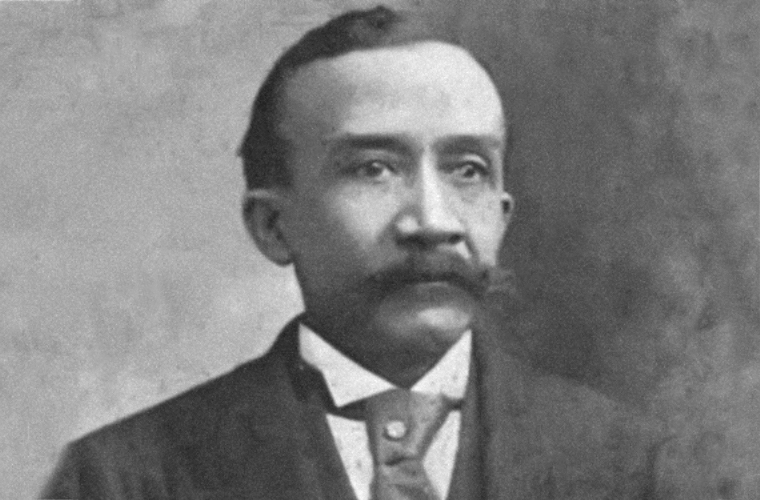 Samuel Scrottron was an inventor of the late 1800s, best known for his invention of the curtain rod. It is unclear if Scrottron was born in Philadelphia, Pennsylvania or New England in the years 1841 or 1843. What is clear is that the Scrottron family moved to New York in 1849. Scrottron graduated from grammar school at the age of fourteen. He went to work for his father in 1863, during the Civil War, selling goods to the 3rd Infantry Regiment of the US Colored Soldiers. Scrottron moved to Florida in 1864, breaking from the family business and started a grocery store chain, with stores in Gainesville, Jacksonville, Lakeville, Palatka, and Tallahassee. He soon sold off his profits and relocated to Springfield, Massachusetts, and worked as a barber. After taking note of the difficulty his customers had, trying to see the back of their heads, Scrottron created dual adjustable mirrors on a standing pole. He obtained a patent for his first invention, the Scrottron Mirror, in March 1868.

Moving back to New York City, Scrottron became involved in race-related issues and local politics. He represented his community in the 1865 National Colored Convention held in Syracuse, New York. In 1872, Scrottron formed the Cuban Anti-Slavery Society with abolitionist Rev. Henry Highland Garnet. Scrottron graduated from Cooper Union with a degree in Superior Ability in Algebra and Engineering in 1875. He then obtained a patent for an adjustable window cornice in 1880 and became a traveling salesman for Kroder, who manufactured Scrottrons’ products.

Scrottron obtains patents for a cornice in 1883, a pole tip in 1886, a curtain rod in 1892, and a supporting bracket in 1893. Many of his inventions were not patented, but he still gained royalties for them. Scrottron is also credited with inventing the “leather hand strap device” used for support when standing on trolley cars.  He came up with the idea after traveling to San Francisco, California. In 1894, Scrottron perfected a way to make glass look like onyx, and four large Connecticut firms manufactured these items around the world.  In 1894, Scrottron was appointed to the Brooklyn Board of Education and served as its only African American member for the next eight years.

Scrottron spent thirty-five years writing on race-related matters for various newspapers and magazines. His articles can be found in the New York Age, the Boston Herald, and the Colored American. His final works were published in “New York African Society for Mutual Relief- Ninety Seventh Anniversary”, 1905. Scrottron founded the Society of the Sons of New York in 1884 and belonged to the Brooklyn Academy of Sciences and the Cooper Union Alumni Society. He held membership in the Ancient and Accepted Scottish Rite (33rd degree Mason), and was Grand Secretary General of its Supreme Council of the United States for several years.

Scrottron married Anna Maria Willet, and the couple had three daughters and three sons. Scrottron’s great-granddaughter was actress and singer Lena Horne. The family life has been documented by Horne’s daughter, Gail Lumet Buckley, in The Hornes: An American Family. Samuel Raymond Scrottron died of natural causes on October 14, 1908.