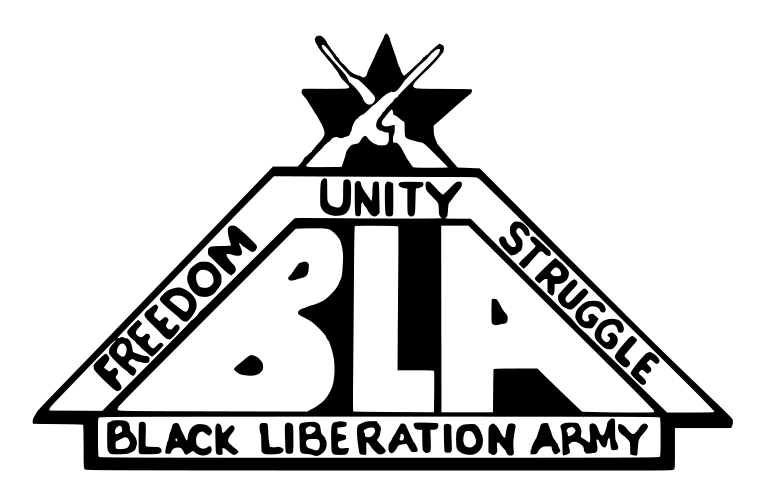 The Black Liberation Army (BLA) was an underground, black nationalist-Marxist militant organization that operated in the United States from 1970 to 1981. Composed largely of former Black Panthers (BPP), the organization’s program was one of “armed struggle” and its stated goal was to “take up arms for the liberation and self-determination of black people in the United States.” The BLA carried out a series of bombings, robberies (what participants termed “expropriations”), and prison breaks.

The Black Liberation Army was formed after the demise of the Black Panther Party. By 1970, police and FBI pressure (see COINTELPRO), infiltration, sectarianism, and the criminalization of the Black Power movement (including long prison sentences and the deaths of key members, among them Fred Hampton, at the hands of police) had crippled the Black Panther Party. This convinced many former party members of the desirability of underground existence, including the assumption that a new period of violent repression was at hand. BLA members operated under the belief that only through covert means, including but not limited to violent acts, could the movement be continued until such a time when an above-ground existence was possible. In this sense, the BLA’s reasoning was similar to that of the Weather Underground.

The conditions under which the Black Liberation Army formed are not entirely clear. It is commonly believed that the organization was founded by those who left the Black Panther Party after Eldridge Cleaver was expelled from the party’s Central Committee. A fallout was inevitable between Cleaver and other Panther leaders after he publicly criticized the BPP, among other things accusing Panther social programs of being reformist rather than revolutionary. Others, including black revolutionary Geronimo Pratt (AKA Geronimo Ji Jaga), assert that the BLA “as a movement concept pre-dated and was broader than the BPP,” suggesting that it was a refuge for ex-Panthers rather than a new organization formed through schism.

The newly formed BLA believed that “the character of reformism is based on unprincipled class collaboration with our enemy” and asserted the following principles:

According to a Justice Department report on BLA activity, the Black Liberation Army is suspected of involvement in over 60 incidents of violence between 1970 and 1976. The Fraternal Order of Police blames the BLA for the murders of 13 police officers.

On October 22, 1970, the BLA is believed to have planted a bomb in St. Brendan’s Church in San Francisco while it was full of mourners attending the funeral of San Francisco police officer Harold Hamilton, who had been killed in the line of duty while responding to a bank robbery. The bomb was detonated, but no one in the church suffered serious injuries.

On May 21, 1971, as many as five men participated in the shootings of two New York City police officers, Joseph Piagentini and Waverly Jones. Those arrested and brought to trial for the shootings include Anthony Bottom (aka Jalil Muntaqim), Albert Washington, Francisco Torres, Gabriel Torres, and Herman Bell.

On August 29, 1971, three armed men murdered 51-year-old San Francisco police officer John Victor Young while he was working at a desk in his police station, which was almost empty at the time due to a bombing attack on a bank that took place earlier – only one other officer and a civilian clerk were there. Two days later, the San Francisco Chronicle received a letter signed by the BLA claiming responsibility for the attack.

In January 2007, eight men labeled the San Francisco 8 were charged by a joint state and the federal task force with Young’s murder. The defendants have been identified as former members of the Black Liberation Army. A similar case was dismissed in 1975 when a judge ruled that police gathered evidence through the use of torture. On June 29, 2009, Herman Bell pleaded guilty to voluntary manslaughter in the death of Sgt. Young. In July 2009, charges were dropped against four of the accused: Ray Boudreaux, Henry W. Jones, Richard Brown, and Harold Taylor. Also that month Jalil Muntaquim pleaded no contest to conspiracy to commit voluntary manslaughter becoming the second person to be convicted in this case.

On 3 November 1971, Officer James R. Greene of the Atlanta Police Department was shot and killed in his patrol van at a gas station. His wallet, badge, and weapon were taken, and the evidence at the scene pointed to two suspects. The first was Twymon Meyers, who was killed in a police shootout in 1973, and the second was Freddie Hilton (aka Kamau Sadiki), who evaded capture until 2002 when he was arrested in New York on a separate charge and was recognized as one of the men wanted in the Greene murder. Apparently, the two men had attacked the officer to gain standing with their compatriots within Black Liberation Army.

In another high-profile incident, Joanne Chesimard (aka Assata Shakur), James Coston (aka Zayd Shakur), and Clark Edward Squire (aka Sundiata Acoli) were said to have opened fire on state troopers in New Jersey after being pulled over for a broken taillight. Coston (Shakur) and state trooper Werner Foerster were both killed during the exchange. Following her capture, Chesimard was tried in six different criminal trials. According to Chesimard, she was beaten and tortured during her incarceration in a number of different federal and state prisons. The charges ranged from kidnapping to assault and battery to bank robbery. Chesimard was found guilty of the murder of both Foerster and her companion Coston (Shakur), but escaped prison in 1979 and eventually absconded to Cuba. Squire was convicted of killing Foerster and sentenced to life in prison.

The BLA was active in the US until at least 1981 when a Brinks truck robbery, conducted with support from Weather Underground members Kathy Boudin and David Gilbert, left a guard and two police officers dead. Boudin and Gilbert, along with several BLA members, were subsequently arrested.

Following the collapse of the BLA, some members – including Ashanti Alston, Donald Weems (aka Kuwasi Balagoon), and Ojore N. Lutalo- became outspoken proponents of anarchism. Weems died in prison of an AIDS-related disease in 1986. Alston remains active in prison support and other activist circles.