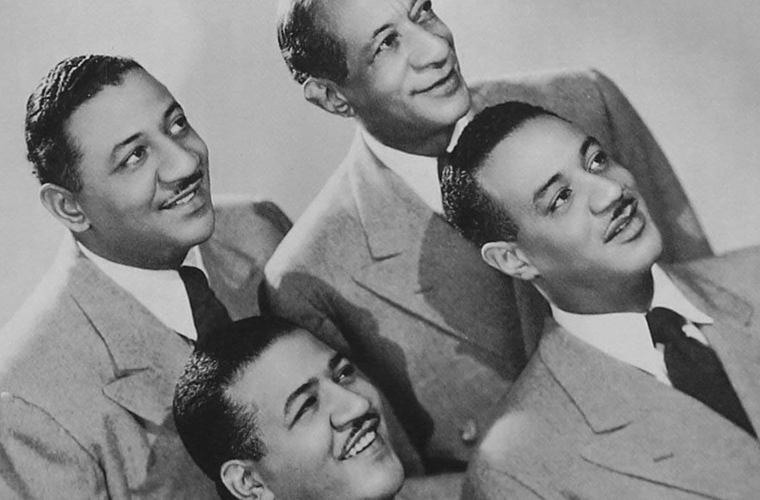 The Mills Brothers began as a barbershop quartet—which was perhaps only natural, as their father, John H. Mills (1882–1967), owned a barbershop. They gave their first public performances in variety shows on the radio in Cincinnati, Ohio. In about 1930 they moved to New York City, where they became the first African American singers to have their own national radio show. Billed as “Four Boys and a Guitar” and accompanied only by brother John’s guitar, they could sound like a full jazz band, particularly on such numbers as “Tiger Rag,” “St. Louis Blues,” and “Bugle Call Rag.” Each brother specialized in an “instrument”: they imitated two trumpets, a trombone, and a tuba. They were also a hit on records and in live performances, and they appeared in several films, including The Big Broadcast (1932) and Broadway Gondolier (1935).

John C. Mills’s sudden death in 1936 was a blow to the close-knit siblings, and they almost dissolved the act. Fortunately, their father took over his son’s role, and the group continued without any loss in popularity (although it was necessary to employ an outside guitarist). They continued mostly in the hot-jazz style, with a strong emphasis on scat singing and instrumental imitations, and made records with such artists as Louis Armstrong, Duke Ellington, Ella Fitzgerald, and the Boswell Sisters. The Mills Brothers had their biggest hit in 1943 with “Paper Doll,” which sold more than six million records and was also a best seller as sheet music. In the mid-1940s they dropped the instrumental imitations and became a more-conventional vocal group, backed by a regular rhythm section or an orchestra. Their later hits included “You Always Hurt the One You Love” (1944), “Glow Worm” (1952), and “Opus One” (1952).

John H. Mills retired in 1956, and the brothers continued as a trio, recording and performing regularly into the 1970s. The act came to an end after Harry’s death in 1982, but Donald Mills in his last years performed the group’s hits with his son, John H. Mills II. Their sound became identified with an era, and many of their recordings were later used on the soundtracks of movies, including Raging Bull(1980), Pearl Harbor (2001), and Being Julia (2004).