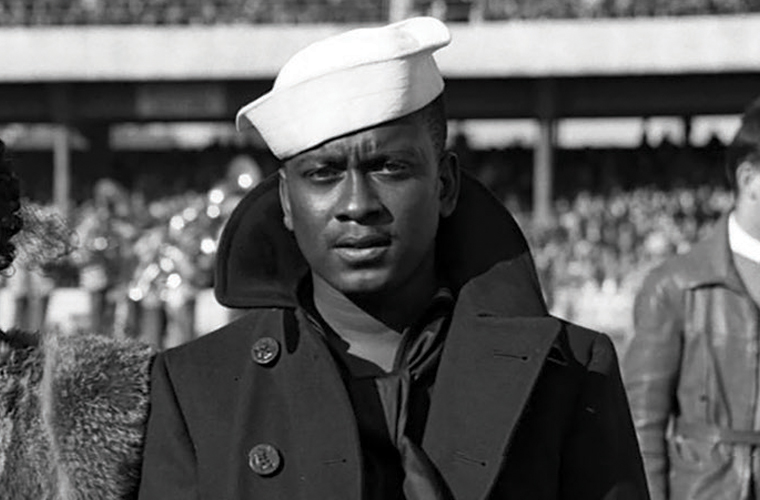 On September 5, 1942, United States Navy Petty Officer First Class Charles Jackson French, of Omaha Nebraska, swam through the night for 6 – 8 hours pulling a raft of 15 wounded sailors with a rope around his stomach through shark-infested waters after the USS Gregory was hit by Japanese naval fire near Guadalcanal. French successfully brought the men to safety on the shores of the Solomon Islands. French was the first black swimmer to earn the Navy Medal for his heroism in 1943.

French’s story first came to light when Robert N. Adrian a young ensign, told a reporter from the Associated Press about how Charles braved the Pacific Ocean to bring the men to safety.

Ensign Adrian was the only one on the bridge to survive and floated over into the water as the ship sank below him. Hearing voices, he found a life raft filled with 15 wounded men. Adrian, though superficially wounded, was able to hang on. “I knew that if we floated ashore we’d be taken as prisoners of war,” he said. “Then French volunteered to swim the raft away from shore. He asked for help to tie a rope around his waist and towed them to safety.” Adrian told him it was impossible that he would only be giving himself up to the sharks that surrounded them “French responded that he was not afraid. He was a powerful swimmer, and swam all night, 6 to 8 hours until they were eventually saved by a landing craft.”

Once Charles Jackson French was identified, he became a national hero. A depiction of French’s heroic actions was included in the WWII Commemorative Card Set produced by Gum Inc., based in Philadelphia Pennsylvania. In addition to the War Gum trading card, his story was told in syndicated comic strips, on calendars and he made public appearances across the country to promote the sale of War Bonds. Pictured is Charles with his sister Viola during a public appearance at a football game in Omaha, Nebraska,1943. He is also recognized by the International Swimming Hall of Fame.

Petty Officer First Class Charles Jackson French passed away on November 7th, 1956 at the age of 37.