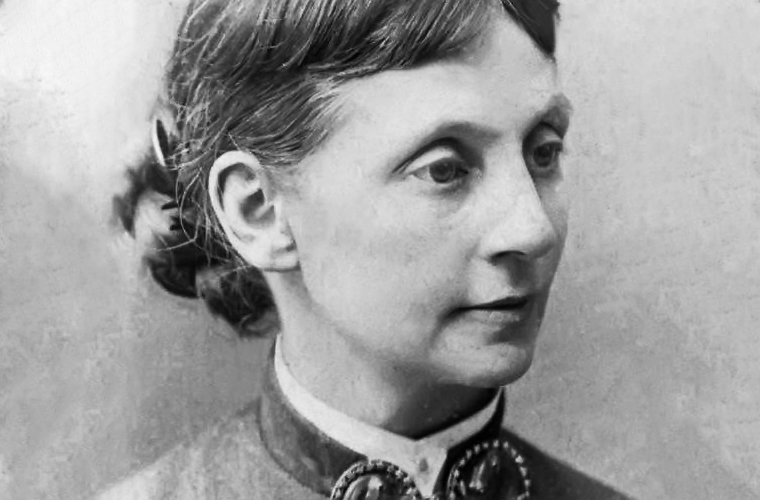 Helen Pitts was born in Honeoye, New York, her parents were activists in the abolitionist and suffragist movements. She was also a descendant of John Alden and Priscilla Alden, who sailed to America on the Mayflower, and a cousin of John and John Quincy Adams. Pitts graduated from Mount Holyoke College (then called the Mount Holyoke Female Seminary) in 1859. After her graduation, she returned to her parents’ home in Honeoye. After the American Civil War, she taught at the Hampton Institute.

While teaching at the institution, she caused local controversy by accusing several residents of directing insults and abuse toward her students, resulting in their arrest. In 1882, Pitts moved to Uniontown in Washington, D.C. to live with her uncle, where she lived next door to Frederick Douglass’ home, Cedar Hill. She was active in the women’s rights movement and co-edited The Alpha, with Caroline Winslow, in Washington. In 1882, Douglass hired Helen as a clerk in the office of the Recorder of Deeds in Washington, to which he had just been assigned. Because he was writing his autobiography, Life and Times of Frederick Douglass, and was often lecturing, Helen aided him frequently in his work. Douglass’ first wife, Anna Murray Douglass, died on August 4, 1882.

After a year of depression, Douglass married Helen on January 24, 1884. They were married by the Rev. Francis J. Grimké, who was of mixed ancestry. Even though her parents were abolitionists, they were against the marriage because Douglass was the son of a white father and a Black mother. The marriage was generally the subject of scorn by both white and Black residents in the town, though the Douglass’s were firm in their convictions. “Love came to me, and I was not afraid to marry the man I loved because of his color,” she said. Douglass laughingly commented, “This proves I am impartial. My first wife was the color of my mother and the second, the color of my father.” A main source of support was Elizabeth Cady Stanton, who said: “In defense of the right to … marry whom we please – we might quote some of the basic principles of our government [and] suggest that in some things individual rights to tastes should control.” The couple was married for eleven years until his heart attack in 1895. They did not have any children together. Frederick had five children with his first wife Anna: Lewis, Frederick Jr., Charles, Rosetta, and Annie.

Building a memorial to Frederick Douglass
In Frederick Douglass’ will he bequeathed Cedar Hill to her, but it lacked the number of witnesses needed in bequests of real estate and was ruled invalid. Helen suggested to his children and their spouses that they agree to set Cedar Hill apart as a memorial to their father and deed it to a board of trustees. The children declined, insisting that the estate be sold, and the money divided among all the heirs. With borrowed money, she bought the property, and then devoted the rest of her life to planning and establishing the Frederick Douglass Memorial and Historical Association. Besides affecting the passage of the law incorporating the association, she worked to raise funds to maintain the estate. For eight years, she lectured throughout the northeast.

During the last year of her life, Helen Pitts Douglass was unable to lecture, as well as discouraged by the falling off contributions for her cause. She begged the Rev. Grimke not to let her work fall by the wayside in her absence. He suggested that if the mortgage on Cedar Hill should not be paid off in her lifetime, money from the sale of the property should go to two college scholarships in her and Frederick’s names. She agreed on the condition that the scholarships be in Douglass’ name only.

Helen Pitts Douglass died in 1903, aged 65 years old. She wished to be buried on the site of Cedar Hill but laws at this time prevented it. She had no funeral or memorial service and was quietly buried next to Frederick Douglass in Rochester. After her death, the $5,500 mortgage was reduced to $4,000, and the National Association of Colored Women, led by Mary B. Talbert of Buffalo, New York, raised funds to buy Cedar Hill. Now administered by the National Park Service, the home is open for tours to inform visitors of Douglass’s contributions to freedom.

BOLEY, OKLAHOMA: THE ALL-BLACK TOWN THAT FOUGHT BACK AGAINST “PRETTY BOY FLOYD’S GANGSTERS