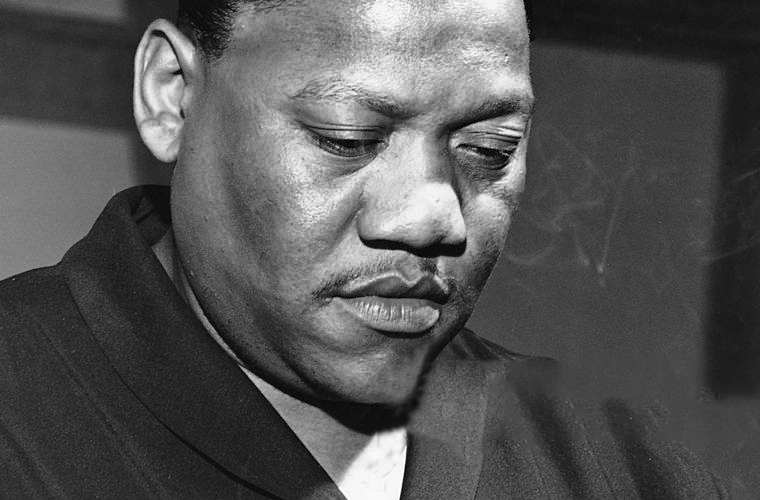 R&B singer Bobby “Blue” Bland was born Robert Calvin Brooks on January 27, 1930, in Millington, Tennessee (though many sources report his birthplace as Rosemark, Tennessee). Bobby’s father, I.J. Brooks, abandoned him as a child. Mary Lee, Bobby’s mother, was left to raise him alone until she married Leroy Bridgeforth, also known as Leroy Bland when Bobby was 6 years old. Bobby quit school in the third grade in order to work in the cotton fields, leaving him without a formal education. He credited his knowledge of music to one of his early musical influences, T-Bone Walker.

In 1947, Bobby Bland moved to Memphis, where he got his start in the music industry. He honed his musical skills by performing with the group the Miniatures and became a founding member of the Beale Streeters, with other members including legendary blues artists B.B. King and Johnny Ace. Bland also began recording for different record labels, including Chess, Duke, and Modern. While only in the beginning stages of his musical career, Bland was drafted into the U.S. military in 1952. After he was discharged in 1954, Bland held several different jobs, including as a valet and chauffeur, before signing a contract with Duke Records. His first No. 1 song was “Farther On Up the Road,” released in 1957. It was also around this time that earned the nickname “Blue,” in part for his song “Little Boy Blue,” which had been inspired by a sermon from Reverend C.L. Franklin, the father of Aretha Franklin. His nickname also stuck due to his reputation for singing about heartbreaking relationships. Bland went on to headline a tour throughout the ’60s, which was made difficult due to his struggle with alcohol abuse. He also released a string of hits throughout the decade, including “I’ll Take Care of You” (1960) and “I Pity the Fool” (1961).

Later in his career, Bland was recognized for his many contributions to blues and R&B music. He was inducted into the Rock and Roll Hall of Fame in 1992 and received the Lifetime Achievement Grammy Award in 1997. In 2012, he was honored at the Memphis Music Hall of Fame.

Bobby “Blue” Bland died in Memphis on June 23, 2013. According to Bobby’s son, Rodd Bland, the singer-songwriter died from complications of an unknown illness. Although Bland wasn’t recognized on the same level as musicians B.B. King and Nat King Cole, he is remembered today for his lasting musical contributions. On his 2000 album, The Blueprint, rapper Jay-Z sampled Bland’s 1974 single “Ain’t No Love in the Heart of the City.” A number of other artists, including Otis Redding and the Allman Brothers, have cited Bland as a powerful influence.