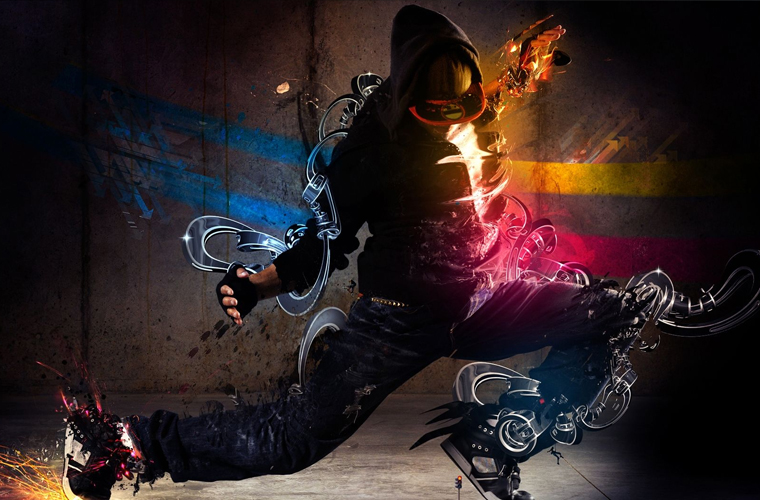 Break dancing, an energetic form of dance, popularized by African Americans and U.S. Latinos, includes stylized footwork and athletic moves such as spinning on the knees, hands, or head. Break dancing originated in New York City during the late 1960s and early 1970s from martial arts moves developed by street gangs. The moves originally learned as a form of self-defense against other gangs, eventually evolved into the complex and athletic moves that characterize modern break dancing.

Break dancing is largely improvisational, without “standard” moves or steps. The emphasis is on energy, movement, creativity, and an element of danger. It is meant to convey the rough world of the street gangs from which it sprang. It is also associated with a particular style of dress that includes baggy pants or sweatsuits, baseball caps worn sideways or backward, and sneakers (required because of the dangerous nature of many of the moves).

The term break refers to the particular rhythms and sounds produced by deejays by mixing sounds from records to produce a continuous dancing beat. The technique was pioneered by DJ Kool Herc (Clive Campbell), a Jamaican deejay in New York who mixed the percussion breaks from two identical records. By playing the breaks repeatedly and switching from one record to the other, Kool Herc created what he called “cutting breaks.” During his live performances at New York dance clubs, Kool Herc would shout, “B-boys go down!”—the signal for dancers to perform the gymnastic moves that are the hallmark of break dancing.

From those early roots, break-dancers began to add different moves to their routines, such as “pops” and “locks,” which brought a robotic quality to the dance. That style was popularized in the early 1970s by artists, including Charlie Robot, who appeared on the popular Soul Train television program. Disco dancers began to emulate those moves, which then entered the mainstream disco culture. At that time, however, break dancing and the hip-hop culture from which it emerged was still associated with crime and gang violence.

In the 1980s break dancing reached a greater audience when it was adopted by mainstream artists such as Michael Jackson. Jackson’s moonwalk—a step that involved sliding backward and lifting the soles of the feet so that he appeared to be gliding or floating—became a sensation among teens of all races. Record producers, seeing the growing popularity of the genre, signed artists who could imitate the street style of the breakers while presenting a more-wholesome image that would appeal to mainstream audiences. Break dancing had gone from a street phenomenon to one that was embraced by the wider culture.

Break dancing had an enormous influence on modern dance styles, and offshoots of it were performed in many kinds of music and especially rap videos as well as in live concerts by popular artists such as Britney Spears. The mainstreaming of the genre was never more clearly demonstrated than in 2004 when break-dancers were invited to perform in the Vatican before Pope John Paul II.