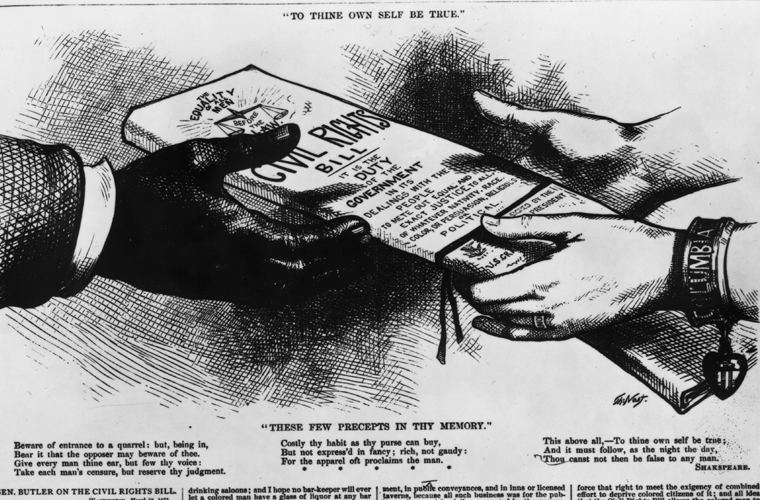 Civil Rights Act of 1875, U.S. legislation, and the last of the major Reconstruction statutes, which guaranteed African Americans equal treatment in public transportation and public accommodations and service on juries. The U.S. Supreme Court declared the act unconstitutional in the Civil Rights Cases (1883).

Enacted on March 1, 1875, the Civil Rights Act affirmed the “equality of all men before the law” and prohibited racial discrimination in public places and facilities such as restaurants and public transportation. The law also made it a crime for anyone to facilitate the denial of such accommodations or services on the basis of colour, race, or “previous condition of servitude.” All lawsuits arising under the Civil Rights Act were to be tried in federal courts, rather than at the state level, though the act was seldom enforced. While few observers expected the legislation to change the prevailing racial attitudes held by both Northern and Southern whites, the law aimed to protect African Americans from deprivation of the minimal rights of citizenship.

In March 1883 the Supreme Court ruled (8–1) in the Civil Rights Cases that neither the Thirteenth Amendment (which banned slavery) nor the Fourteenth Amendment (which guaranteed equal protection of the laws to African Americans) was infringed by the existence of uncodified racial discrimination, which therefore could not be constitutionally prohibited. The decision nullified the Civil Rights Act and in effect robbed the two amendments of much of their meaning. The ruling would remain in force until the court disavowed it by upholding the Civil Rights Act of 1964, nearly 100 years after the Civil War ended.