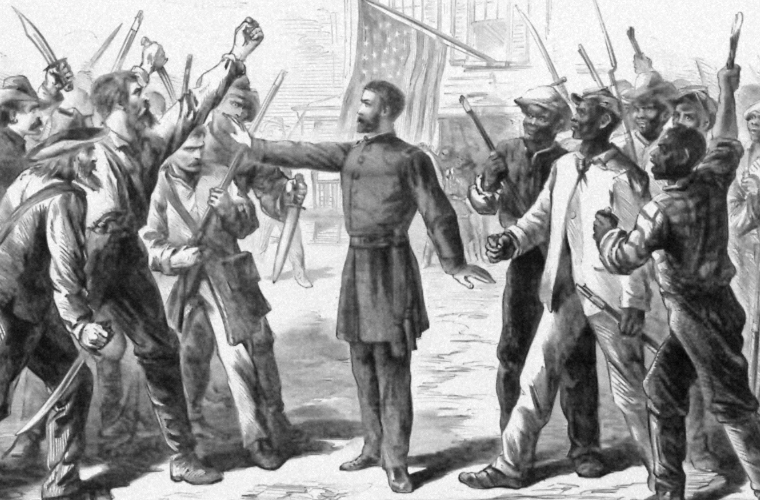 Reconstruction, in U.S. history, the period (1865–77) that followed the American Civil War and during which attempts were made to redress the inequities of slavery and its political, social, and economic legacy and to solve the problems arising from the readmission to the Union of the 11 states that had seceded at or before the outbreak of war.  Reconstruction witnessed far-reaching changes in America’s political life. At the national level, new laws and constitutional amendments permanently altered the federal system and the definition of American citizenship. In the South, a politically mobilized black community joined with white allies to bring the Republican Party to power, and with it a redefinition of the responsibilities of government.

The Emancipation Proclamation in 1863 freed African Americans in rebel states, and after the Civil War, the Thirteenth Amendment emancipated all U.S. slaves wherever they were. As a result, the mass of Southern blacks now faced the difficulty Northern blacks had confronted—that of a free people surrounded by many hostile whites. One freedman, Houston Hartsfield Holloway, wrote, “For we colored people did not know how to be free and the white people did not know how to have a free colored person about them.”

Even after the Emancipation Proclamation, two more years of war, service by African American troops, and the defeat of the Confederacy, the nation was still unprepared to deal with the question of full citizenship for its newly freed black population. The Reconstruction implemented by Congress, which lasted from 1866 to 1877, was aimed at reorganizing the Southern states after the Civil War, providing the means for readmitting them into the Union, and defining the means by which whites and blacks could live together in a nonslave society. The South, however, saw Reconstruction as a humiliating, even vengeful imposition and did not welcome it.

During the years after the war, black and white teachers from the North and South, missionary organizations, churches, and schools worked tirelessly to give the emancipated population the opportunity to learn. Former slaves of every age took advantage of the opportunity to become literate. Grandfathers and their grandchildren sat together in classrooms seeking to obtain the tools of freedom.

After the Civil War, with the protection of the Thirteenth, Fourteenth, and Fifteenth Amendments to the Constitution and the Civil Rights Act of 1866, African Americans enjoyed a period when they were allowed to vote, actively participate in the political process, acquire the land of former owners, seek their own employment, and use public accommodations. Opponents of this progress, however, soon rallied against the former slaves’ freedom and began to find means of eroding the gains for which many had shed their blood.