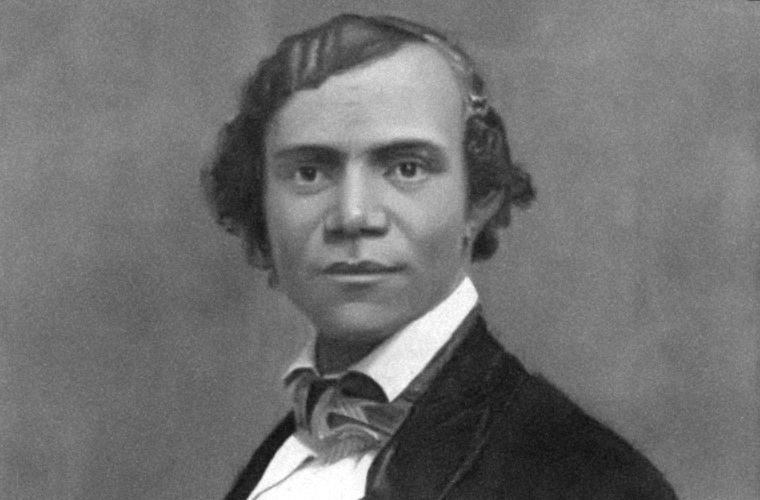 Henry Bibb, lecturer, abolitionist, author, and newspaperman; b. 10 May 1815 in Shelby County, Ky, son of James Bibb and Milldred Jackson, a slave; m. first 1833 Malinda ——, and they had two children, one of whom died in infancy; m. secondly June 1848 Mary Elizabeth Miles, a Quaker from Boston; d. 1 Aug. 1854 in Windsor, Upper Canada.

Henry Walton Bibb, born into slavery, worked for at least three masters in Kentucky and Louisiana. He made several bids for freedom. On one of these, he spent a few months in Canada in 1838, but when he returned to Kentucky in an attempt to free his first wife and their daughter he was caught and sold to a group of gamblers. He finally made his way alone to Detroit in December 1840. There he joined the anti-slavery movement, traveling across Michigan, Ohio, and the northeastern states lecturing upon the evils of slavery. In 1850, two years after his marriage to Mary Elizabeth Miles, a member of the Anti-Slavery Society in Boston, the passage by the American Congress of the Fugitive Slave Act compelled Bibb and his wife to cross the Detroit River and settle in Sandwich, Upper Canada. Bibb related the full story of his years in slavery and his efforts to escape in an autobiography published that same year in New York.

Bibb began publication of the Voice of the Fugitive, the first black newspaper in Upper Canada, at Sandwich on 1 Jan. 1851. A bi-weekly, the Voice militantly attacked racial bigotry, advocating the immediate end to chattel slavery everywhere and the complete integration into Canadian society of the black refugee by a devotion to temperance, education, and agriculture. The newspaper opposed annexation to the United States because of the institution of slavery in that country and was utterly opposed to the introduction of black separate schools, through the Common Schools Act (1850), because Bibb felt that the future of the blacks in Canada depended upon their being part of an integrated community. Unlike its counterpart the Provincial Freeman, edited by Samuel Ringgold Ward and Mary Ann Shadd, the Voice greatly admired Josiah Henson, the elder statesman and somewhat controversial leader of former slaves in Upper Canada.

Bibb was also a founding director of the Refugee Home Society, a black colonization project established in Detroit in May 1851 to help meet the needs of an estimated 25,000 to 35,000 fugitive slaves living in Canada. The society, supported by donations from American and Canadian anti-slavery groups, purchased land located in scattered blocks at Maidstone, Puce, Belle River, and elsewhere around Windsor from the Canada Company for resale to refugee blacks who had no personal property and lacked the means to buy land privately. Each settler received 25 acres, five of which would be free if the land was cultivated within three years and the remainder of which was to be paid for in nine installments. Any profits from the land sales were to be used by the society to purchase more land, build schools, and pay teachers. In January 1852 the Voice of the Fugitive was made the official organ of the society, to publish its constitution and bylaws and to report regularly on its affairs.

Support for the society, however, was not unanimous among the black community. Within months of its incorporation, Mary Ann Shadd and her supporters attacked the practice of “begging” for funds and clothing from Canadian and American philanthropic associations. The society’s opponents also accused the administrators of inept management, the fraudulent use of funds for personal gain, and land jobbing for the benefit of Detroit land speculators. None the less, with the assistance of the American Missionary Association, the society enjoyed a modest success, settling 150 refugees before it was disbanded at the end of the civil war.

Bibb was also closely associated with the anti-slavery movement in Canada. At Toronto, on 11 Sept. 1851, he was elected chairman of the North American Convention of Colored Freemen, a general meeting of delegates from England, Jamaica, the free American states, and Upper Canada. The convention was called to renew the public and constitutional fight against American slavery, to encourage black slaves to resettle in Canada, and to unite all North American blacks into an agricultural union with the power to sway legislation. A year later, on 21 Oct. 1852, Bibb was elected president of the Windsor Anti-Slavery Society, a branch of the parent Toronto society.

From June 1852 Bibb had had an editorial assistant, James Theodore Holly, and this allowed him to resume an active schedule of speaking engagements promoting the work of the Refugee Home Society and soliciting subscriptions to his newspaper. The Voice of the Fugitive continued in print until a fire on 9 Oct. 1853 destroyed Bibb’s printing office. Thereafter, Bibb published a one-page newsletter until his premature death at Windsor on 1 Aug. 1854.