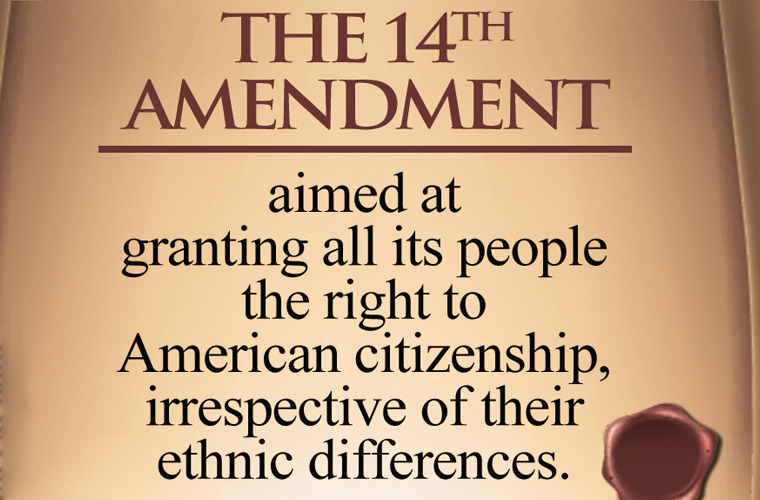 Fourteenth Amendment, amendment (1868) to the Constitution of the United States that granted citizenship and equal civil and legal rights to African Americans and slaves who had been emancipated after the American Civil War, including them under the umbrella phrase “all persons born or naturalized in the United States.” In all, the amendment comprises five sections, four of which began in 1866 as separate proposals that stalled in the legislative process and were amalgamated into a single amendment.

This so-called Reconstruction Amendment prohibited the states from depriving any person of “life, liberty, or property, without due process of law” and from denying anyone within a state’s jurisdiction equal protection under the law. Nullified by the Thirteenth Amendment, the section of the Constitution apportioning representation in the House of Representatives based on a formula that counted each slave as three-fifths of a person was replaced by a clause in the Fourteenth Amendment specifying that representatives be “apportioned among the several states according to their respective numbers, counting the whole number of persons in each state, excluding Indians not taxed.”

The amendment also prohibited former civil and military officeholders who had supported the Confederacy from again holding any state or federal office—with the proviso that this prohibition could be removed from individuals by a two-thirds vote in both Houses of Congress. Moreover, the amendment upheld the national debt while exempting the federal government and state governments from any responsibility for the debts incurred by the rebellious Confederate States of America. Finally, the last section, mirroring the approach of the Thirteenth Amendment, provided for enforcement.

The full text of the amendment is

Representatives shall be apportioned among the several states according to their respective numbers, counting the whole number of persons in each state, excluding Indians not taxed. But when the right to vote at any election for the choice of electors for President and Vice President of the United States, Representatives in Congress, the executive and judicial officers of a state, or the members of the legislature thereof, is denied to any of the male inhabitants of such state, being twenty-one years of age, and citizens of the United States, or in any way abridged, except for participation in rebellion, or other crime, the basis of representation therein shall be reduced in the proportion which the number of such male citizens shall bear to the whole number of male citizens twenty-one years of age in such state.

No person shall be a Senator or Representative in Congress, or elector of President and Vice President, or hold any office, civil or military, under the United States, or under any state, who, having previously taken an oath, as a member of Congress, or as an officer of the United States, or as a member of any state legislature, or as an executive or judicial officer of any state, to support the Constitution of the United States, shall have engaged in insurrection or rebellion against the same, or given aid or comfort to the enemies thereof. But Congress may by a vote of two-thirds of each House, remove such disability.

Congress shall have the power to enforce, by appropriate legislation, the provisions of this article.

Among those legislators responsible for introducing the amendment’s provisions was Rep. John A. Bingham of Ohio, Sen. Jacob Howard of Michigan, Rep. Henry Deming of Connecticut, Sen. Benjamin G. Brown of Missouri, and Rep. Thaddeus Stevens of Pennsylvania. The Congressional Joint Resolution proposing the amendment was submitted to the states for ratification on June 16, 1866. On July 28, 1868, having been ratified by the requisite number of states, it entered into force. However, its attempt to guarantee civil rights were circumvented for many decades by the post-Reconstruction-era black codes, Jim Crow laws, and the “separate but equal” ruling of Plessy v. Ferguson (1896).