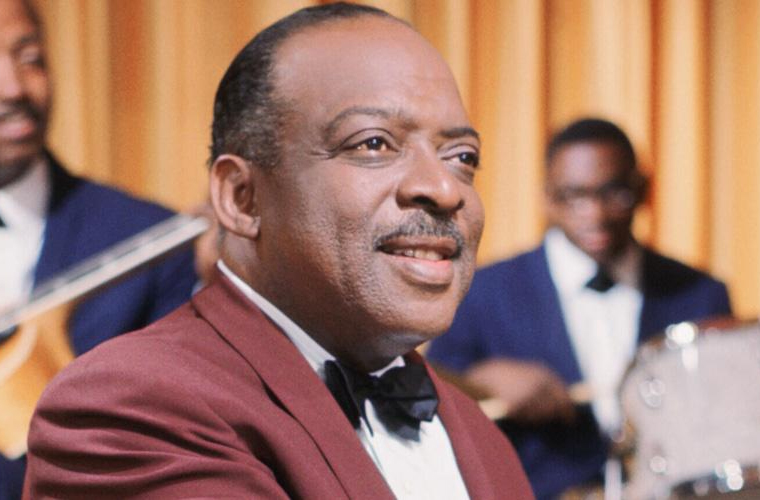 Basie studied music with his mother and was later influenced by the Harlem pianists James P. Johnson and Fats Waller, receiving informal tutelage on the organ from the latter. He began his professional career as an accompanist on the vaudeville circuit. Stranded in Kansas City, Missouri, in 1927, Basie remained there and eventually (in 1935) assumed the leadership of a nine-piece band composed of former members of the Walter Page and Bennie Moten orchestras. One night, while the band was broadcasting on a shortwave radio station in Kansas City, he was dubbed “Count” Basie by a radio announcer who wanted to indicate his standing in a class with aristocrats of jazz such as Duke Ellington. Jazz critic and record producer John Hammond heard the broadcasts and promptly launched the band on its career. Though rooted in the riff style of the 1930s swing-era big bands, the Basie orchestra played with the forceful drive and carefree swing of a small combo. They were considered a model for ensemble rhythmic conception and tonal balance—this despite the fact that most of Basie’s sidemen in the 1930s were poor sight readers; mostly, the band relied on “head” arrangements (so-called because the band had collectively composed and memorized them, rather than using sheet music).

The early Basie band was also noted for its legendary soloists and outstanding rhythm section. It featured such jazzmen as tenor saxophonists Lester Young (regarded by many as the premier tenor player in jazz history) and Herschel Evans, trumpeters Buck Clayton and Harry “Sweets” Edison, and trombonists Benny Morton and Dicky Wells. The legendary Billie Holiday was a vocalist with Basie for a short stint (1937–38), although she was unable to record with the band because of her contract with another record label; mostly, vocals were handled by Jimmy Rushing, one of the most renowned “blues bawlers.” The rhythm unit for the band—pianist Basie, guitarist Freddie Green (who joined the Basie band in 1937 and stayed for 50 years), bassist Walter Page, and drummer Jo Jones—was unique in its lightness, precision, and relaxation, becoming the precursor for modern jazz accompanying styles. Basie began his career as a stride pianist, reflecting the influence of Johnson and Waller, but the style most associated with him was characterized by spareness and precision. Whereas other pianists were noted for technical flash and dazzling dexterity, Basie was known for his use of silence and for reducing his solo passages to the minimum amount of notes required for maximum emotional and rhythmic effect. As one Basie band member put it, “Count don’t do nothin’. But it sure sounds good.”

The Basie orchestra had several hit recordings during the late 1930s and the early ’40s, among them “Jumpin’ at the Woodside,” “Every Tub,” “Lester Leaps In,” “Super Chief,” “Taxi War Dance,” “Miss Thing,” “Shorty George,” and “One O’Clock Jump,” the band’s biggest hit and theme song. It had continued success throughout the war years, but, like all big bands, it had declined in popularity by the end of the 1940s. During 1950 and ’51, the economy forced Basie to front an octet, the only period in his career in which he did not lead a big band. In 1952 increased demand for personal appearances allowed Basie to form a new orchestra that in many ways was as highly praised as his bands of the 1930s and ’40s. (Fans distinguish the two major eras in Basie bands as the “Old Testament” and “New Testament.”) The Basie orchestra of the 1950s was a slick, professional unit that was expert at sight reading and demanding arrangements. Outstanding soloists such as tenor saxophonists Lucky Thompson, Paul Quinichette, and Eddie “Lockjaw” Davis and trumpeters Clark Terry and Charlie Shavers, figured prominently. Singer Joe Williams, whose authoritative, blues-influenced vocals can be heard on hit recordings such as “Every Day I Have the Blues” and “Alright, Okay, You Win,” was also a major component in the band’s success. Arrangers Neal Hefti, Buster Harding, and Ernie Wilkins defined the new band’s sound on recordings such as “Li’l Darlin’,” “The Kid from Red Bank,” “Cute,” and “April in Paris” and on celebrated albums such as The Atomic Mr. Basie (1957).

The 1950s band showcased the sound and style Basie was to employ for the remainder of his career, although there were to be occasional—and successful—experiments such as Afrique (1970), an album of African rhythms and avant-garde compositions that still managed to remain faithful to the overall Basie sound. Throughout the 1960s, Basie’s recordings were often uninspired and marred by a poor choice of material, but he remained an exceptional concert performer and made fine records with singers Ella Fitzgerald, Sarah Vaughan, and Frank Sinatra. When jazz record producer Norman Granz formed his Pablo label in the 1970s, several established jazz artists, including Basie, signed on in order to record unfettered by commercial demands. Basie benefited greatly from his association with Granz and made several recordings during the ’70s that rank among his best work. He recorded less often with his big band during this era (although when he did, the results were outstanding), concentrating instead on small-group and piano-duet recordings. Especially noteworthy were the albums featuring the duo of Basie and Oscar Peterson, with Basie’s economy and Peterson’s dexterous virtuosity proving an effective study in contrasts. Many of Basie’s albums of the ’70s were Grammy Award winners or nominees.

Suffering from diabetes and chronic arthritis during his later years, Basie continued to front his big band until a month before his death in 1984. The band itself carried on into the next century, with Thad Jones, Frank Foster, and Grover Mitchell each assuming leadership for various intervals. Basie’s autobiography, Good Morning Blues, written with Albert Murray, was published posthumously in 1985. Along with Duke Ellington, Count Basie is regarded as one of the two most important and influential bandleaders in the history of jazz.