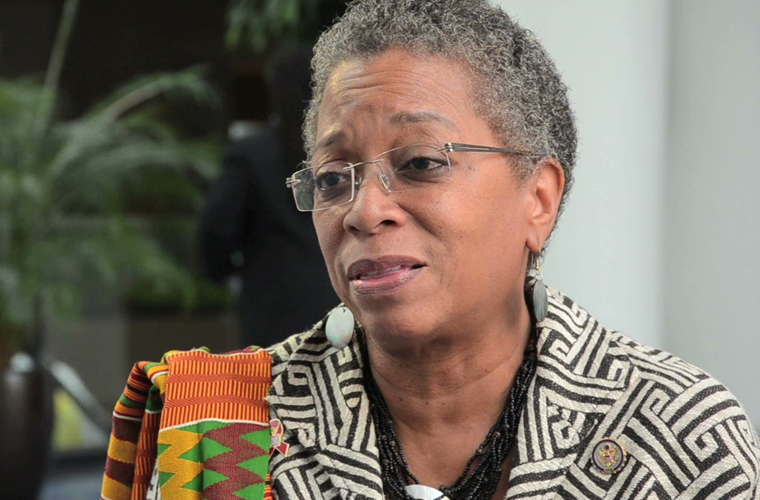 Dr. Donna M. Christian-Christensen served nine terms in the U.S. congressional representative (non-voting) for the United States Virgin Islands. She took her responsibilities as a representative well beyond health care policy and was firmly committed to improving quality-of-life by addressing those issues that influence the environment we live and survive or prosper in.

Donna Christian was born in 1945 in Teaneck, New Jersey into a prominent family with roots in St. Croix. While she had always wanted some kind of career helping people and had at one time been interested in pursuing nursing, it was not until her sophomore year of college that favor for a friend awakened her to the possibility of becoming a physician. “One day, I got a United Negro College Fund booklet about encouraging young minorities to go into medicine. And I really picked it up for a friend of mine, but I read it, and I changed my mind overnight. I decided to go to medical school.” She went on to train at the George Washington University School of Medicine.

In her sophomore year of medical school, she made a decision that would change her life. In the summer of 1968, when she “should have been studying for her boards,” she volunteered to provide medical services for a political event in Washington, DC, called the Poor People’s Campaign. “It was kind of a tough trek for many people to come from all over the country,” Christian remembered, “and it poured. The tents were set up in mud, and that’s where we worked for about two weeks.” She spent an entire day with a young woman who had come from the South without any family, and she had a sexually transmitted disease. Since Donna Christian was the only woman physician in the van at the time, she was assigned to take care of the young patient and complete her diagnosis and treatment.

Christian realized how important her work could be in the lives of young people, and went home with an interest in adolescent medicine. She chose to study family practice and to rotate through psychiatry, pediatrics, and obstetrics-gynecology. “I thought that was  a great preparation. And of course, when I got home, the need was for a family physician. And that’s what I became.”

Dr. Christian earned her doctor of medicine degree in 1970 from the George Washington University School of Medicine. She completed her residency in family medicine at Howard University Medical Center, and in 1975 worked as an emergency room physician in the Virgin Islands. She served as staff physician at the Maternal and Child Health Program between 1975 and 1976 and was the medical director of the Nesbitt Clinic in Frederiksted until 1978. She became director of the Frederiksted Health Center in 1980, the director of Maternal and Child Health and Family Planning in 1985, and the medical director of the St. Croix Hospital in 1987. From 1988 until 1994, she served as the Territorial Assistant Commissioner of Health and as the Acting Commissioner of Health from 1994 to 1995. She maintained a private practice from 1975 until her election to Congress in 1996.

As chair of the Congressional Black Caucus’s (CBC) Health Braintrust since 1998, Congresswoman Christian-Christensen led the effort to oversee and advocated on minority health issues on the national and international level. She remains at the forefront of bringing minority health concerns to the attention of national policymakers.

In addition to chairing the CBC’s Health Braintrust, Dr. Christian-Christensen co-chaired the Friends of the Caribbean Caucus. She was a member of the House Committee on Small Business and its subcommittee on Rural Enterprises. She was the ranking member of the Subcommittee on National Parks and Public Lands of the House Committee on Resources. In 2003, she was named to the House Select Committee on Homeland Security, where she worked on oversight of the public health infrastructure. She was also the recipient of many national, regional, and local awards. In May 2003, she was named to Ebony magazine’s list of the 100 Most Influential Black Americans.