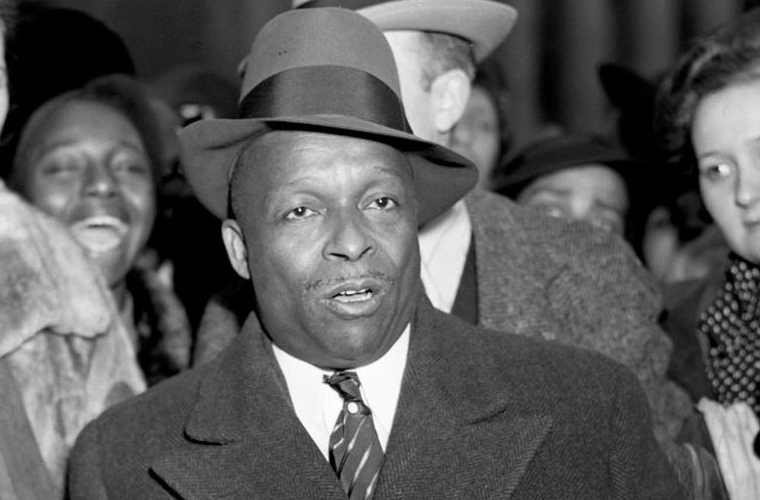 Father Divine’s Peace Mission remains one of the most unorthodox religious movements in America. He may or may not have been born George Baker, either in Maryland or further south. Although a Baptist, he received God’s word at the Azusa Street Revival. Early on, he preached a message of equality among men and the hope of heaven-on-earth to black men. His actions got him arrested, imprisoned, and, on one occasion, institutionalized in a mental asylum. However, his charismatic message of an interracial paradise on earth caught on in the North, where he was able to preach in greater anonymity. Ultimately, Father Divine’s Peace Mission would become well known for its aggressive efforts to desegregate all aspects of American society.

Father Divine created a philosophy that merged elements of Catholicism, Pentecostalism, Methodism, and positive thinking. Father Divine’s followers believed that he embodied the Second Coming of Jesus Christ. Mainstream Americans scoffed at this small African-American deity, but many in black America thought he was crazy like a fox. Father Divine used white disciples to buy property.

He bought a hotel near Atlantic City, New Jersey so that blacks could access the beach. He married white women and lived openly with them. To most of black America, he was doing things no other black man could have gotten away with.

In 1931, the local authorities arrested Father Divine and dozens of his disciples in Sayville, Long Island, for “invading the county with his religious practices,” which included black men and white women living in the same house together. Divine was convicted and sentenced to a year in jail by a biased judge, Lewis J. Smith. Three days after imposing the sentence, however, Judge Smith, 55, dropped dead. When a reporter asked the jailed preacher for a comment, Divine replied, “I hated to do it.”

The trial and its consequences brought a great deal of popularity to Father Divine. Over 150 Peace Missions sprang up around the country, with one-quarter of them located in New York. The largest Mission formed in Harlem, then trapped in the deepening Great Depression. At one point, the Peace Mission was the largest property owner in Harlem. And during the Depression, Father Divine fed tens of thousands of food and his vision of racial equality. They venerated him as a deliverer from Heaven.

Father Divine at a parade to celebrate the acquisition of a new communal dwelling, which he calls Heavens, in Harlem. July 31, 1938. From the beginning, Father Divine had ministered to the whole person, the body as well as soul, and that approach found an eager reception among the impoverished. The movement rapidly built up a network of businesses, including restaurants, gas stations, grocery and clothing stores, hotels, farms, and many other enterprises.

All provided high-quality goods and services inexpensively, and not incidentally created jobs for Father Divine’s faithful. By the end of the Depression decade, the Peace Mission had accumulated savings in excess of $15 million.

But his success created problems. Father Divine lived largely, dressed ostentatiously, and challenged the status quo. As his empire grew, so did the investigations by journalists and government officials. Newspapers reported allegations of mishandling of funds, sexual abuse, and homosexuality.

Yet, through his teachings and his actions, Father Divine could be counted among the stalwarts who defended African-Americans’ right to have heaven here on earth, not pie in the sky.