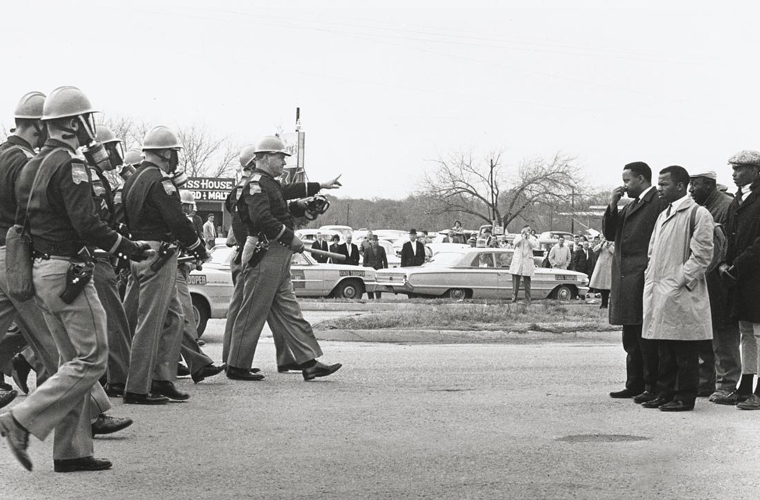 Nearly a century after the Confederacy’s guns fell silent, the racial legacies of slavery and Reconstruction continued to reverberate loudly throughout Alabama in 1965. Even the passage of the landmark Civil Rights Act of 1964 months earlier had done little in some parts of the state to ensure African Americans the basic right to vote. Perhaps no place was Jim Crow’s grip tighter than in Dallas County, where African Americans made up more than half of the population, yet accounted for just 2 percent of registered voters.

For months, the efforts of the Student Nonviolent Coordinating Committee (SNCC) to register black voters in the county seat of Selma had been thwarted. In January 1965, Martin Luther King Jr. came to the city and gave the backing of the Southern Christian Leadership Council (SCLC) to the cause. Peaceful demonstrations in Selma and surrounding communities resulted in the arrests of thousands, including King, who wrote to the New York Times, “This is Selma, Alabama. There are more negroes in jail with me than there are on the voting rolls.”

The rising racial tensions finally bubbled over into bloodshed in the nearby town of Marion on February 18, 1965, when state troopers clubbed protestors and fatally shot 26-year-old Jimmie Lee Jackson, an African American demonstrator trying to protect his mother, who was being struck by police.

In response, civil rights leaders planned to take their cause directly to Alabama Governor George Wallace on a 54-mile march from Selma to the state capital of Montgomery. Although Wallace ordered state troopers “to use whatever measures are necessary to prevent a march,” approximately 600 voting rights advocates set out from the Brown Chapel AME Church on Sunday, March 7. King, who had met with President Lyndon Johnson two days earlier to discuss voting rights legislation, remained back in Atlanta with his own congregation and planned to join the marchers en route the following day. By a coin flip, it was determined that Hosea Williams would represent the SCLC at the head of the march along with 25-year-old John Lewis, an SNCC chairman and future U.S. congressman from Georgia.

The demonstrators marched undisturbed through downtown Selma, where the ghosts of the past constantly permeated the present. As they began to cross the steel-arched bridge spanning the Alabama River, the marchers who gazed up could see the name of a Confederate general and reputed grand dragon of the Alabama Ku Klux Klan, Edmund Pettus, staring right back at them in big block letters emblazoned across the bridge’s crossbeam.

Once Williams and Lewis reached the crest of the bridge, they saw trouble on the other side. A wall of state troopers, wearing white helmets and slapping billy clubs in their hands, stretched across Route 80 at the base of the span. Behind them were deputies of county sheriff Jim Clark, some on horseback, and dozens of white spectators waving Confederate flags and giddily anticipating a showdown. Knowing a confrontation awaited, the marchers pressed on in a thin column down the bridge’s sidewalk until they stopped about 50 feet away from the authorities.

“It would be detrimental to your safety to continue this march,” Major John Cloud called out from his bullhorn. “This is an unlawful assembly. You have to disperse, you are ordered to disperse. Go home or go to your church. This march will not continue.” “Mr. Major,” replied Williams, “I would like to have a word, can we have a word?”
“I’ve got nothing further to say to you,” Cloud answered.

Williams and Lewis stood their ground at the front of the line. After a few moments, the troopers, with gas masks affixed to their faces and clubs at the ready, advanced. They pushed back Lewis and Williams. Then the trooper’s pace quickened. They knocked the marchers to the ground. They struck them with sticks. Clouds of tear gas mixed with the screams of terrified marchers and the cheers of reveling bystanders. Deputies on horseback charged ahead and chased the gasping men, women, and children back over the bridge as they swung clubs, whips, and rubber tubing wrapped in barbed wire. Although forced back, the protestors did not fight back.

Weeks earlier, King had scolded Life magazine photographer Flip Schulke for trying to assist protestors knocked to the ground by authorities instead of snapping away. “The world doesn’t know this happened because you didn’t photograph it,” King told Schulke, according to the Pulitzer Prize-winning book “The Race Beat.” This time, however, television cameras captured the entire assault and transformed the local protest into a national civil rights event. It took hours for the film to be flown from Alabama to the television network headquarters in New York, but when it aired that night, Americans were appalled at the sights and sounds of “Bloody Sunday.”

Around 9:30 p.m., ABC newscaster Frank Reynolds interrupted the network’s broadcast of “Judgment at Nuremberg”—the star-studded movie that explored Nazi bigotry, war crimes, and the moral culpability of those who followed orders and didn’t speak out against the Holocaust—to air the disturbing, newly arrived footage from Selma. Nearly 50 million Americans who had turned into the film’s long-awaited television premiere couldn’t escape the historical echoes of Nazi stormtroopers in the scenes of the rampaging state troopers. “The juxtaposition struck like psychological lightning in American homes,” wrote Gene Roberts and Hank Klibanoff in “The Race Beat.”

The connection wasn’t lost in Selma, either. When his store was finally empty of customers, one local shopkeeper confided to Washington Star reporter Haynes Johnson about the city’s institutional racism, “Everybody knows it’s going on, but they try to pretend they don’t see it. I saw ‘Judgment at Nuremberg’ on the Late Show the other night and I thought it fits right in; it’s just like Selma.”

Outrage at “Bloody Sunday” swept the country. Sympathizers staged sit-ins, traffic blockades, and demonstrations in solidarity with the voting rights marchers. Some even traveled to Selma where two days later King attempted another march but, to the dismay of some demonstrators, turned back when troopers again blocked the highway at the Edmund Pettus Bridge. Finally, after a federal court order permitted the protest, the voting rights marchers left Selma on March 21 under the protection of federalized National Guard troops. Four days later, they reached Montgomery with the crowd growing to 25,000 by the time they reached the capitol steps.

The events in Selma galvanized public opinion and mobilized Congress to pass the Voting Rights Act, which President Johnson signed into law on August 6, 1965. Today, the bridge that served as the backdrop to “Bloody Sunday” still bears the name of a white supremacist, but now it is a symbolic civil rights landmark.