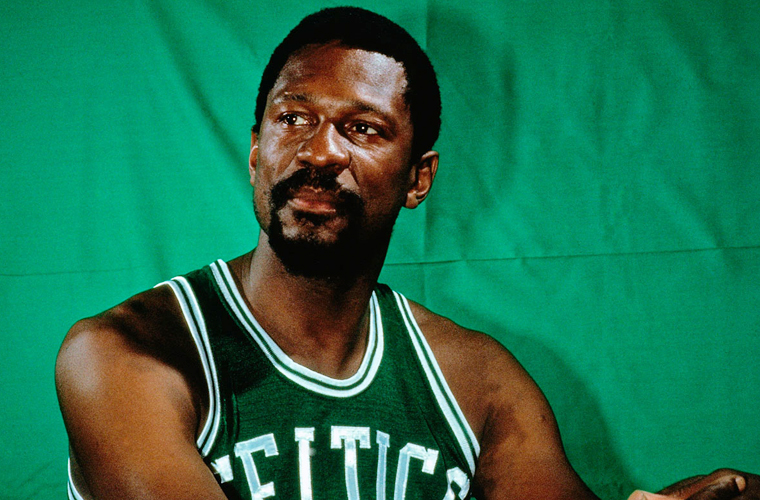 Bill Russell, byname of William Felton Russell, (born February 12, 1934, Monroe, Louisiana, U.S.), was an American basketball player who was the first outstanding defensive center in the history of the National Basketball Association (NBA) and one of the sport’s greatest icons. He won 11 NBA titles in the 13 seasons that he played with the Boston Celtics, and he became the first African American coach of a modern major professional sports team in the United States when he was named the player-coach of the Celtics in 1966.

Russell could very easily have never taken up basketball, much less gone on to become one of the sport’s immortals. He was born in rural Louisiana. When Russell was eight years old, his father moved the family to Oakland, California, where the job prospects were better. Russell, while no behemoth, was tall enough to make his high school team on height alone. He was a marginal player until, while on a summer basketball tour he had been selected for as an afterthought, he realized that running and jumping could be used to mirror and counteract the flashy, creative scorers that routinely gave teams fits. It was a breakthrough that would change not only his life but, in the long term, basketball itself.

Russell was lightly recruited by colleges, but Hal DeJulio, a former player at the nearby University of San Francisco (USF), had seen him play and had an inkling as to his potential, so he recommended Russell to his old school. In college, the 6-foot 9-inch (2.06-meter) Russell blossomed, providing a defensive presence that helped lead USF to National Collegiate Athletic Association (NCAA) championships in 1955 and 1956. In addition, he was a high-level sprinter and high jumper on USF’s track-and-field team (Wilt Chamberlain, his future archrival, also excelled at track and field up until his pro basketball career).

In 1956 Red Auerbach—the Celtics’ head coach and general manager—targeted Russell in the NBA draft, seeing the solution to his team’s shortcomings. Once again, there was an element of chance involved: Auerbach had never seen Russell play and instead had to rely on the word of a trusted peer. Moreover, the Celtics needed to move up in the draft in order to pick him; with Russell coming off two straight NCAA titles, some team was bound to take the plunge. So the Celtics traded center Ed Macauley and the rights to guard-forward Cliff Hagan, who had yet to play in the NBA owing to his military service, to the St. Louis Hawks shortly after the Hawks used the second overall pick of the draft to select Russell. Both Macauley and Hagan would eventually land in the Naismith Memorial Basketball Hall of Fame, an indication of how highly Auerbach valued Russell.

Russell’s impact was immediate. The Celtics won a title in his rookie year, and he became the league’s first African American superstar, though not its first black player (who was Earl Lloyd in 1956). He missed out on the NBA’s Rookie of the Year award, ostensibly because teammate Tom Heinsohn had played the entire season whereas Russell had missed time as a result of his participation in the Melbourne 1956 Olympic Games (where he helped the U.S. men’s basketball team win a gold medal). But there was more to it than that: the white Heinsohn was simply a more attractive candidate for many voters.

Russell, outspoken and relentlessly intelligent when it came to matters of race, was not just the NBA’s first black superstar; as the Celtics quickly came to dominate the NBA, he also became an activist on par with Muhammad Ali. Russell would not stand for racism in sports, which was ironic, given Boston’s historical notoriety in that department.

During his career, Russell supported the American civil rights movement, spoke out against the Vietnam War, and did much that, had it come from any lesser athlete, would have caused immediate controversy. But the Celtics kept winning, and he remained the engine that made them go. Frustratingly, his sheer basketball excellence made his actions not only excusable for fans but tolerated in a way that bordered on dismissive. His on-court achievements did not give him a platform; instead, they granted him a strange kind of amnesty—the very greatness that should have forced others to listen somehow overshadowed any trouble he might have wanted to stir up.

By the end of his career, however, Russell himself had come to see the turmoil of the 1960s as far more important than the silly little game he played for a living. As the decade progressed, the Celtics continued to make history. In 1964 they became the first team in the NBA to start an all-black lineup. Auerbach’s lineup came out of necessity; he was notoriously indifferent to social causes and the opposing backlash. It was, however, a milestone made possible by Russell’s performance and larger significance. When Auerbach retired after the Celtics won the 1965–66 NBA title, Russell succeeded him as a coach. Granted, it was in part because no one could deal with the moody Russell except Russell himself, but it still made him the first African American coach in NBA history, as well as the first to win a title when Boston took the 1967–68 championship.

Russell took home one more championship before hanging up his sneakers for good in 1969. He had made great strides within the game of basketball, but the restless, conscientious Russell felt that there were bigger battles to fight. After his retirement, he served as head coach of the Seattle SuperSonics (1973–77) and the Sacramento Kings (1987–88), served as a commentator on television broadcasts of NBA games, and continued to remain active in social causes. His autobiography, Second Wind: The Memoirs of an Opinionated Man (co-written with Taylor Branch), was published in 1979. Russell was inducted into the Naismith Memorial Basketball Hall of Fame in 1975, and in 2011 he was awarded the Presidential Medal of Freedom. 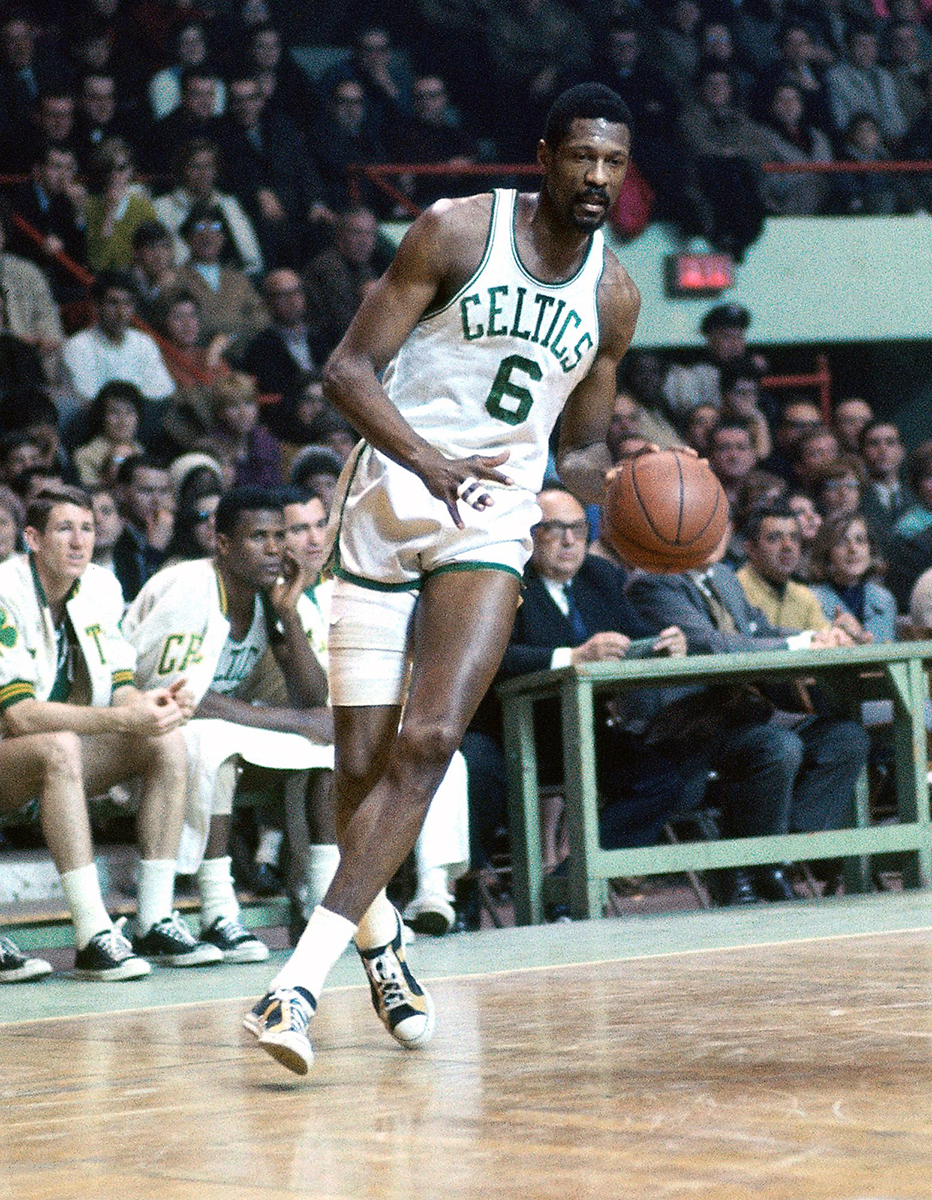 In 13 seasons, Russell won 11 NBA championships (1957, 1959–66, and 1968–69). For good measure, he might have had 12, had an ankle injury not sidelined him early in the 1958 NBA finals. It is a truly staggering rate of success, one that no other NBA player has come close to approaching. Russell’s Celtics ruled the roost at a time when the minuscule number of teams (the NBA consisted of eight or nine franchises for the majority of his career) made for a greatly condensed talent pool, and a combination of integration and improved scouting brought on an unprecedented rush of new stars.

Yet in a sport that traditionally celebrates scoring and offensive heroics, Russell was an anomaly: a dominant player for whom making shots were truly secondary. His calling card was defense, rebounding, and—above all else—shot-blocking, which he transformed into a fluid athletic art in the same way that some of his contemporaries had altered the perception of what was possible on offense. Before his arrival, the Celtics had been a shot-happy, nearly out-of-control team, led by bypassing wizard Bob Cousy.

What Russell did was close the circuit, creating turnovers that allowed Boston to get back on offense even faster, as well as patrol the paint with an intensity that single-handedly compensated for the Celtics’ imbalance. Over the years, Russell’s approach became the team’s overall philosophy as athletic players who saw defense as a means to key the fast break were introduced into the roster. The Celtics dynasty retooled over the years between 1956 and 1969, but the one constant was Russell. He defined the team’s philosophy and strategy. But above all else, Russell was basketball’s ultimate winner.