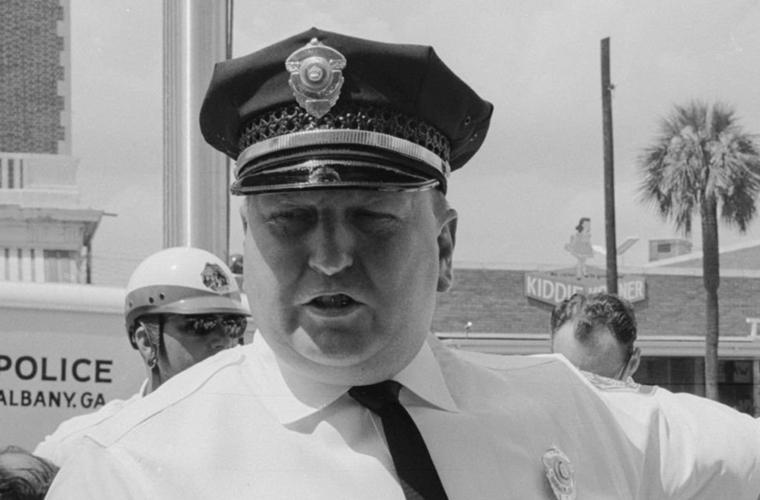 As police chief of Albany, Georgia, Laurie Pritchett gained national attention when he effectively thwarted the efforts of the Albany Movement in 1961–1962. Pritchett’s nonviolent response to demonstrations, including the mass arrests of protesters and the jailing of Martin Luther King, Jr., was seen as an effective strategy in bringing the campaign to an end before the movement could secure any concrete gains.

Pritchett was born on 9 December 1926, in Griffin, Georgia. Pritchett attended Auburn University and South Georgia College before graduating from the National Academy of the Federal Bureau of Investigation and the Southern Police Institute at the University of Louisville. An Army veteran, he was also a decorated and distinguished member of numerous law enforcement organizations. By 1961 Pritchett had risen to become Albany’s Chief of Police.

In 1961 Charles Sherrod and Cordell Reagon of the Student Nonviolent Coordinating Committee (SNCC) began to organize a grassroots movement in Albany, Georgia. Gaining the support of Albany State College students, local ministers, and others in the community, SNCC contested racial segregation in bus and train stations, libraries, parks, and hospitals; and discrimination in jury representation, voting, and employment. Pritchett ordered his officers to enforce the law without using violence in public and to make arrests under laws protecting the public order, rather than under the more legally unstable segregation laws. Pritchett, who had anticipated mass arrests, arranged to have access to jails in nearby cities available for the hundreds of arrested demonstrators. According to King, “Chief Pritchett felt that by directing his police to be nonviolent, he had discovered a new way to defeat the demonstrations”

At the invitation of W. G. Anderson, president of the Albany Movement, King, and the Southern Christian Leadership Conference arrived in Albany in December 1961. King’s presence in Albany drew national attention to the protests. When King and Ralph Abernathy were found guilty of parading without a permit in July 1962, an anonymous man paid their bail. King wanted to remain in jail to pressure city officials to negotiate in good faith with the Albany Movement, and in a statement following his release, King said: “This is one time that I’m out of jail and I’m not happy to be out” (King, Statement, 12 July 1962). King and Abernathy were arrested again in late July, but were given suspended sentences and released. The judgment brought much relief to Pritchett, who was well aware throughout the campaign that demonstrations increased when King was jailed.

Throughout the movement, white Albany city officials never followed through on any of the compromises reached with protesters. In December 1961 demonstrations were temporarily halted by the promise that bus and train stations would be desegregated, protesters would be released from jail, and a biracial committee would be formed to discuss segregation issues in Albany. Albany city officials stalled on implementing these changes and did not uphold all parts of the agreement. Despite the dishonesty of some Albany officials, however, King believed Pritchett was inherently a good person. “I sincerely believe that Chief Pritchett is a nice man, a basically decent man, but he’s so caught up in a system that he ends up saying one thing to us behind closed doors and then we open the newspaper and he’s said something else to the press” (King, Address, 16 July 1962).

In August 1962, King left Albany with no tangible civil rights gains achieved. While many in the press called the movement “one of the most stunning defeats” in King’s career, Pritchett was lauded for his use of nonviolence (“King Suffered”). Pritchett’s nonviolent approach left an indelible imprint on King, who later wrote of his indignation at Pritchett’s use of “the moral means of nonviolence to maintain the immoral ends of racial injustice” (King, 99).

After leaving Albany, Pritchett served as chief of police in High Point, North Carolina, until his retirement in 1975. Although King and Pritchett were adversaries in the 1960s, Pritchett later considered King a “close personal friend” (Pritchett, 23 April 1976). He died in 2000, at the age of 73.