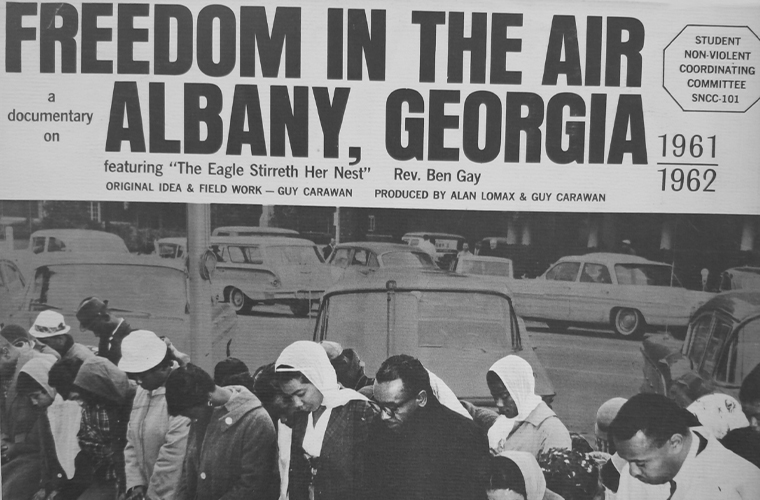 The Albany Movement began in fall 1961 and ended in summer 1962. It was the first mass movement in the modern civil rights era to have as its goal the desegregation of an entire community, and it resulted in the jailing of more than 1,000 African Americans in Albany and surrounding rural counties. Martin Luther King Jr. was drawn into the movement in December 1961 when hundreds of Black protesters, including himself, were arrested in one week, but eight months later King left Albany admitting that he had failed to accomplish the movement’s goals.

When told as a chapter in the history of the national civil rights movement, Albany was important because of King’s involvement and because of the lessons he learned that he would soon apply in Birmingham, Alabama. Out of Albany’s failure, then, came Birmingham’s success. Recent historians, however, have suggested that extending the narrative of the Albany Movement chronologically and geographically and treating the movement on its own terms—as a local movement with deep roots—creates a very different picture of the freedom struggle in the southwest corner of the state.

Background
Although the struggle for civil rights in Albany can be said to have started during Reconstruction, when thousands of politically active Black men elected fellow African Americans to local and state offices, the roots of the modern movement can be traced to the early-twentieth-century Jim Crow era, when fewer than thirty African Americans were registered to vote in Albany. In the immediate wake of World War I (1917-18), returning Black veteran C. W. King founded a local branch of the National Association for the Advancement of Colored People in Albany. Although dormant for years, it was revitalized in the 1940s. The perennial desire to gain more control over their own lives led some middle-class African Americans to organize voter registration drives in the 1940s and 1950s. Others petitioned local governments to make improvements in the infrastructure of Black neighborhoods. C. W. King’s son, C. B. King, went to law school and used his talents on behalf of African Americans in the segregated courtrooms of southwest Georgia.

The Movement, 1961-1962
In 1961 Albany witnessed the intersection of some of these local efforts with those of three young Student Nonviolent Coordinating Committee (SNCC) workers—Charles Sherrod, Cordell Reagon, and Charles Jones—who had come to the Albany area to conduct a voter registration drive.

The SNCC workers encouraged students and others in Albany to challenge the establishment and its segregation policies. From the start, they faced opposition from whites as well as conservative African Americans. Divisions in the Black community would continue to plague civil rights efforts throughout 1961 and 1962. Yet at important moments, Albany’s African Americans rose above the divisions. They did so in mid-November 1961 when the major Black improvement organizations in town formed the Albany Movement and were selected as their president William G. Anderson, a young Black physician. Mass meetings were called, protestors marched, and by mid-December, more than 500 demonstrators had been jailed. The leaders decided to call in Martin Luther King Jr. to keep the momentum going and to secure greater national publicity for the cause. In December King spoke at a mass meeting, marched the next day, and was arrested and jailed.

In Albany, King witnessed the power of song to inspire and empower the crowds attending the mass meetings. Out of Albany emerged the SNCC Freedom Singers, including Albany native Bernice Johnson Reagon, who brought this rich musical tradition, borrowed from the rural Baptist churches to other communities around the nation.

Convinced that city officials had agreed to certain concessions, King accepted bail only to discover that the white leadership refused to consider any of the movement’s demands. King returned to Albany the following summer for sentencing on the convictions relating to the December marches. Although he and fellow civil rights leader Ralph David Abernathy chose jail over paying a fine, a white attorney anonymously paid their fines, and they were released against their will.

King decided to stay and carry on his effort to desegregate the city. He brought in his Southern Christian Leadership Conference (SCLC) staff to coordinate the campaign. He had a formidable opponent in Albany police chief Laurie Pritchett. Pritchett ostensibly practiced the nonviolence that King preached, ordering his officers to avoid brutality, at least when the TV cameras and news reporters were present. Prepared for the waves of marchers King encouraged, Pritchett had them arrested and sent off to jails in the surrounding counties, including Baker, Mitchell, and Lee.

In the end, King ran out of willing marchers before Pritchett ran out of jail space. Once again King got himself arrested, and once again he was let go. By early August it was clear that King had proved ineffective in bringing about change in Albany, but he had learned the important lessons that he and the SCLC would carry to Birmingham.

After Effects
From King’s perspective, the Albany Movement was a failure, but African Americans in Albany disagreed. King’s failure did not mean that the movement failed. SNCC field secretary Charles Sherrod remarked, “Now I can’t help how Dr. King might have felt, . . . but as far as we were concerned, things moved on. We didn’t skip one beat.” In fact, Black voter registration efforts were so successful that, two months after King left Albany, African American businessman Thomas Chatmon secured enough votes in the election for a city commission seat to force a run-off election. The following spring the city commission removed all the segregation statutes from its books.

From Albany, SNCC workers and others led protest actions in nearby Americus and Moultrie, and African Americans in other southwest Georgia towns and counties were inspired to challenge their local white power structures. The civil rights movement went through several stages in the Albany area. Once the segregation laws were challenged and overturned, movement leaders turned to school integration in the late 1960s and 1970s. When court-ordered integration required many school boards in and around Albany to bus students, white parents established private academies, many of which still flourish in the region.

Recent Developments
In the 1980s civil rights efforts shifted to politics and the attempt to end at-large voting in city and county elections. By the 1990s, however, civil rights leaders had refocused on education and practices like tracking or grouping students by “academic ability,” an informal means of segregating white students from Black. Meanwhile, community leaders in Albany began in the 1990s to address the issues of race that had previously been swept under the carpet. The city’s and county’s political leaders agreed to allocate $750,000 to renovate the Old Mt. Zion Church, where King had rallied the masses in 1961-62, into the Albany Civil Rights Institute, which opened in 1998. And supporting all of these efforts was the Albany Herald, which in the early 1960s campaigned vigorously against King and the Black struggle to destroy segregation.

At the start of the twenty-first century, Albany was different in many ways from what it had been only four decades before. Diversity is now the watchword of the political and business establishment. And yet, in other ways, Albany remains divided. Its school system is majority Black because of massive white flight to neighboring suburban counties. Black per capita income stubbornly trails that of whites, and the jails contain disproportionately high numbers of young African American males. Despite the success of the Albany Movement, the legacy of American apartheid continues to mark this Black Belt community.