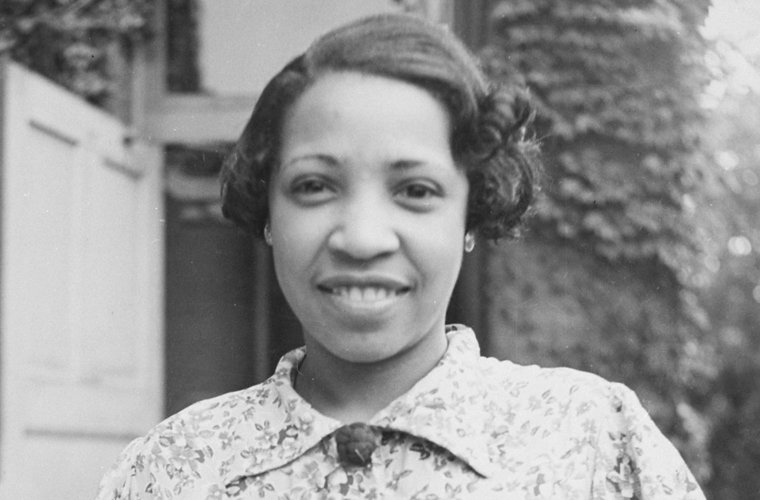 Lois Mailou Jones (1905-1998) was a prominent African-American artist in the mid- to late-twentieth century. In addition to teaching at Howard University for several decades, Jones became the first African American to have a solo exhibition at the Museum of Fine Arts in Boston. As her biographer, Tritobia Haves Benjamin told Beth Baker of Ebony, “She is a reflection of the varied facets that represent American art. Just as American art has unfolded, embracing different styles and different cultures so too have Jones’ career.”

Jones was born November 3, 1905, in Boston, Massachusetts. She was the daughter of Thomas Vreeland and Carolyn Dorinda (nee Adams) Jones. Her father worked as the superintendent of an office building, in which the family lived when Jones was a child. This proved to be a weird, isolated existence. Jones often played on the roof of the building. At night, Thomas Jones attended Suffolk Law School for nine years, becoming that school’s first black graduate at the age of 40. Though he never took the bar exam, Jones saw what it took to succeed.

Carolyn Jones was a beautician, who often went to rich white people’s homes to do their hair. Jones would accompany her mother and look at their art. Her mother also designed hats. One of Jones’ paintings was inspired by her mother’s artful headwear. Jones received further artistic inspiration during her summers at Martha’s Vineyard. Every year from the ages of 4 to 17, Jones and her family would stay at her grandmother’s home (where she worked for a wealthy family). Later, her parents bought a house there themselves.

Martha’s Vineyard proved to be a key to Jones’ development as an artist. While she liked to draw from an early age and began experimenting with watercolors at the age of seven, the Vineyard afforded Jones the opportunity to be inspired by the natural landscape. Jones’ mother would hang her watercolors on the clothesline and conduct informal art shows off her daughter’s work. She met other artists and art administrators. They included Jonas Lie, president of the National Academy of Design. Lie was impressed with her work and offered to help, but died before seeing her portfolio. Jones also met the sculptor Meta Warrick Fuller, who recommended that she study abroad.

As a high school student, Jones’ artistic ambitions were encouraged by her teachers. She attended a commercial high school (Boston’s High School for the Practical Arts) on scholarship. Jones spent many of her after-school hours working and studying at the Boston Museum of Fine Arts. She once took a class in vocational drawing and would sketch the other artists’ work. Jones later told Beth Baker of Ebony, “If I set out to do something, I’m going to do it. I discipline myself. And I love it. I love being an artist.” Jones also was an apprentice to Grace Ripley, a dance costume designer. She helped Ripley prepare costumes for the Ted Shawn School of Dance.

In 1923, after graduating from high school, Jones received the Susan Minot Lane Scholarship to study at the Boston Museum of Fine Arts. She was one of only two black students. Jones excelled at the Museum’s school and won numerous awards. When she graduated with honors in 1927, Jones was disappointed to learn that the museum would not hire her as a teacher. She was told that she should teach other African Americans in the south. Jones continued her education, receiving teacher certification through night classes at the Boston Normal Art School (later known as the Massachusetts College of Art) in 1927. She did graduate work at Boston’s Designers Art School and took a class at Harvard University during the summer of 1928.

At this point, most of Jones’ artistic energies were focused on textile design. She worked in Boston and was very successful, although it was sometimes necessary to have a white friend submit her work in order to make sales. Jones hoped to be recognized by the public for her work, and textile design was a generally anonymous art form. As she told Tritobia Hayes Benjamin in American Visions, “I wanted my name to go down in history.” Therefore, Jones decided to focus on painting.

Jones was hired by the Palmer Memorial Institute, in Sedalia, North Carolina, a new prep school for black students. Jones founded and chaired the art department and created the curriculum. Jones’ activities were not limited to art: she also was the dancing teacher, basketball coach, and played the piano for Sunday church. The one to two-year-long experience changed her perception of race.

In 1930, Jones accepted an offer to teach at Howard University, a primarily African American college located in Washington, D.C. The school had tried to hire her earlier, but Jones chose Palmer instead. The adjustment was a difficult one her. Washington, D.C. was more segregated and openly hostile to blacks than her hometown of Boston. While Jones enjoyed teaching watercolors, design and drawing, she knew that some art teachers neglected their own work. She did not. Instead, Jones was inspired by and inspirational to her own students. In 1931, she began preparing illustrations for the Negro History Bulletin, which was produced at Howard by historian Carter G. Woodson. After attending a summer course at Columbia in 1934, she made masks for several dance companies.

Jones’ direction as a painter was greatly guided by the year she spent in Paris. In 1937-38, she studied at the Academie Julia, on a general education (Rockefeller) fellowship. Jones felt liberated by the lack of racial prejudice. Bart Barnes of the Washington Post quoted her as saying, “Paris really gave me my freedom. I forgot my color. I forgot that I was black.” Jones was noticed for her work, which tended towards impressionism and post-impressionism, and garnered much recognition. She exhibited her paintings at the Salon des Artistes Francaise and Societe des Artists Independent. Jones had found it difficult to have her work exhibited in the United States.

African art was very popular in France. She saw numerous exhibitions, which inspired her to produce one of her best-known works, 1938’s “Les Fetiches.” Five African masks were depicted with oils on linen in a modernist/ cubist style. This was one of the first paintings by an African American artist to use African imagery. “Les Fetiches” was later purchased by the National Museum of American Art as part of its permanent collection. Jones would return to Paris each summer until World War II.

When Jones returned to Howard, she tried to improve the university’s art department while furthering her own career. Although Jones was allowed to exhibit her work at a 1938 show in Boston, she often faced discrimination. She was not permitted to enter a competition at Washington’s Corcoran Gallery of Arts in 1941, because of her race. Instead, her work “Indian Shops, Gay Head” was entered under a white friend’s name. It won. Two years later, Jones told the truth.

Jones wanted to be recognized in competition, not as a black woman, but as a talented artist. At least one award from the Corcoran was rescinded because of her race. A similar event happened when she entered a watercolor in competition at the Smithsonian. Although an expert selected her work for the first price, she later discovered that the jury rejected his choice because of her race. Because of these incidents, Jones would often send her work to competitions out of town, so that her race would not be known.

Although Jones was interested in both black and European-inspired art, she was encouraged to produce work that was relevant to the African and African-American experience. Jones did so, but often in an impressionistic manner. Her 1944 painting “Mob Victim” (also known as “Mediation”) made a particularly strong statement. The painting depicted an African-American man about to be lynched, calmly awaiting his fate. It won a first honorable mention for oils at a competition in Paris.

In 1953, Jones married Vergniaud Pierre-Noel, a Haitian artist and graphic designer who worked for the United Nations’ World Health Organization. Her husband and his native country, which she began to visit annually, greatly influenced her style. Jones gradually moved away from Impressionism. Her paintings became more individual, spirited, fresh, and fluid. She began using more geometric forms and colors.

By the 1960s, many student radicals at Howard regarded Jones as part of the establishment. She, however, remained sympathetic to their cause and tried to build bridges between generations. In 1963, she produced “Challenge America,” a collage based on sketches made at the 1963 March on Washington. It brought together disparate influences of African-American history with African tribal roots. In the late 1960s, Jones traveled to 11 African countries with a grant from Howard. The purpose of her trip was to meet African artists and collect more information about their work.

In 1973, Jones became the first African American artist to be given a solo show at the Boston Museum of Fine Arts. Jones had finally gotten the recognition she deserved. By the time she retired from Howard in 1977, Jones had taught 2500 students, several of whom had gone on to establish successful careers, including David Driskenn and Elizabeth Catlett.

Although Jones retired from teaching, she continued to paint and was encouraged to do so. Jones related a conversation with a Paris-based curator in an article by Jacqueline Trescott of the Washington Post: “the man said, ‘not in age, you think young, think of what Picasso could do at the same age.’ That was quite encouraging because sometimes you get to a place, where you retire, and you can’t go on. I feel I have a lot to say and I can’t wait to continue.” By 1983, her paintings could be found in 16 of the most prestigious museums, including the Metropolitan Museum of Art, Corcoran Gallery, and the Boston Museum of Fine Arts.

In the 1990s, Jones received more recognition. Many leading museums and galleries held retrospective exhibits of her work, including a traveling retrospective, “The World of Lois Mailou Jones.” A mainstream audience was exposed to her work in 1995 when she prepared a poster for Cry, the Beloved Country, a film with an African theme.

Jones died of a heart attack on June 9, 1998, in Washington, D.C. As Edmund Gaither, National Center of Afro-American Artists director told Mike Hughes of the Gannett News Service, Jones was “one of the few figures in American art to achieve a long, exciting and inspiring career, in which there [was] no room for defeat, dullness or trickery.”