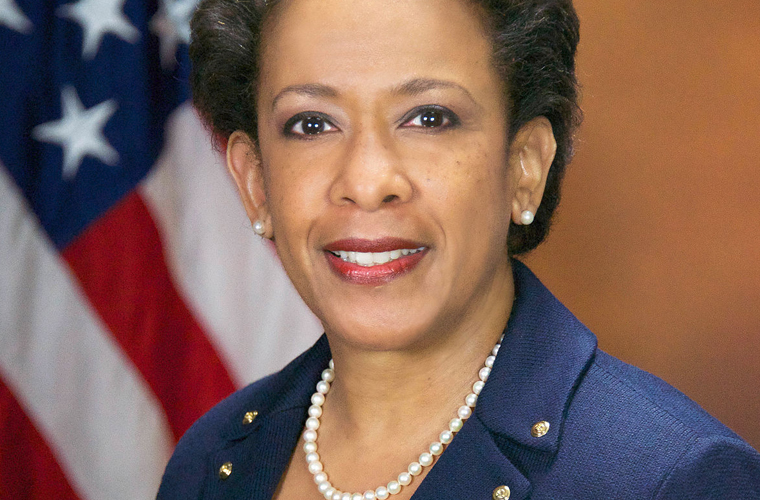 Lynch’s grandfather, a sharecropper, assisted those seeking to escape punishment under Jim Crow laws, and Lynch later recalled how her father, a fourth-generation Baptist minister who was active in local civil rights issues, took her to watch legal proceedings at the courthouse in Durham, North Carolina. Her mother was a school librarian.

Lynch attended Harvard University (A.B. in English and American literature, 1981) and Harvard Law School (J.D., 1984). She then worked as a litigation associate at the New York City law firm of Cahill Gordon & Reindel from 1984 until 1990, when she was hired as an assistant U.S. attorney at the U.S. attorney’s office for the Eastern District of New York, which handled federal law enforcement across three New York City boroughs (Brooklyn, Queens, and Staten Island) and two counties on nearby Long Island. She rose through the ranks of that office, serving as deputy chief of general crimes (1992–93), chief of the Long Island division (1994–98), and chief assistant to the U.S. attorney (1998–99) before being named U.S. attorney in 1999 by Pres. Bill Clinton.

Lynch returned to private practice in 2002 as a partner at a Washington, D.C., law firm, Hogan & Hartson LLP (later Hogan Lovells), where she specialized in commercial litigation, white-collar criminal defense, and corporate compliance issues. During that time she also served as special counsel to the prosecutor of the International Criminal Tribunal for Rwanda. In 2010 Pres. Barack Obama chose her to resume her former job as U.S. attorney for the Eastern District of New York.

In November 2014 Obama nominated Lynch to succeed Eric Holder as U.S. attorney general, the head of the Department of Justice (DOJ). After a contentious 166-day confirmation process—involving hours of testimony by Lynch, hundreds of written questions, and debates over funding for the Department of Homeland Security, Obama’s executive actions on immigration, and human-trafficking legislation—Lynch’s nomination finally came up for a vote in the Senate on April 24, 2015, and passed, 56–43. She took office three days later.

As attorney general, Lynch made police reform a priority of the DOJ. It conducted investigations into the law-enforcement departments of various cities, notably Baltimore and Chicago, following a series of high-profile allegations of police brutality. Its reports were largely scathing, and in 2017 Baltimore agreed to implement a number of changes recommended by the DOJ. Lynch also focused on minority rights, including those of the lesbian, gay, bisexual, and transgender community. Notably, in 2016 she announced that the DOJ was suing North Carolina over a law that required transgender people to use public restrooms, locker rooms, and changing rooms that matched their biological sex (as indicated on their birth certificates). Lynch claimed that the legislation violated their civil rights. 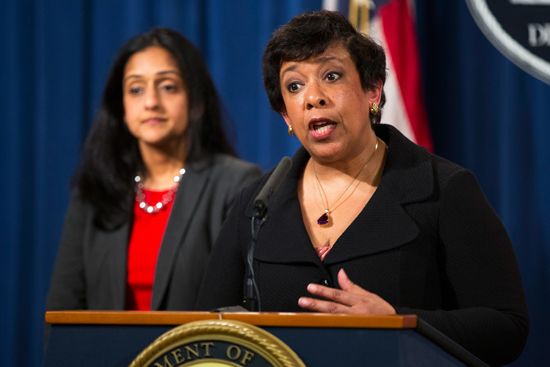 Loretta Lynch (right) speaking at a news conference, May 2016.

In 2016 Lynch drew criticism concerning her handling of a federal investigation into Hillary Clinton’s use of a private e-mail server while secretary of state. In June Lynch met with Bill Clinton while both were at a Phoenix airport. Although she described the conversation as purely social, others believed it suggested a conflict of interest. Acknowledging that the meeting appeared inappropriate, Lynch announced that she would accept the recommendations from her staff and from the FBI’s investigation—both of which later found that no criminal charges should be filed against Hillary Clinton.