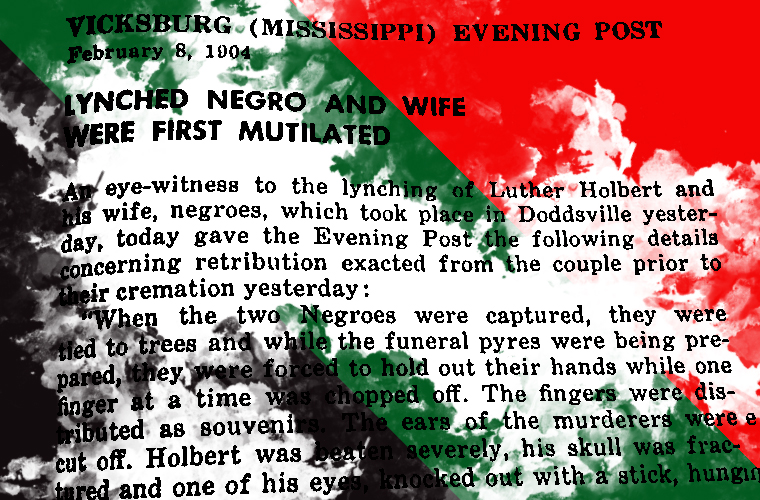 Here’s how my hometown paper, the Vicksburg Evening Post, described a 1904 lynching of Luther Holbert and his wife, accused of killing Holbert’s employer:

“When the two Negroes were captured, they were tied to trees and while the funeral pyres were being prepared, they were forced to suffer the most fiendish tortures. The blacks were forced to hold out their hands while one finger at a time was chopped off. The fingers were distributed as souvenirs. The ears of the murderers were cut off. Holbert was beaten severely, his skull was fractured and one of his eyes, knocked out with a stick, hung by a shred from the socket…

“The most excruciating form of punishment consisted in the use of a large corkscrew in the hands of some of the mob. This instrument was bored into the flesh of the man and woman, in the arms, legs, and body, and then pulled out, the spirals tearing out big pieces of raw, quivering flesh every time it was withdrawn.”

Future Supreme Court Justice Clarence Thomas started us down this path of gratuitous use of the word lynching when he called the sexual harassment accusations of law professor Anita Hill “a high-tech lynching.” But the proper word for citizens airing their concerns about judicial nominees who will have lifetime jobs is not lynching but democracy.

To understand the real meaning of lynching, get a copy of the 2000 book, “Without Sanctuary: Lynching Photography in America.” People once attended lynchings as entertainment and sent their relative’s picture postcards of the events. One of the most compelling photos is of a 1930 double lynching in Indiana. There’s a young couple laughing in the foreground and a man with a Hitler-style mustache pointing at the swinging bodies. A lock of the victim’s hair was framed along with the photograph. 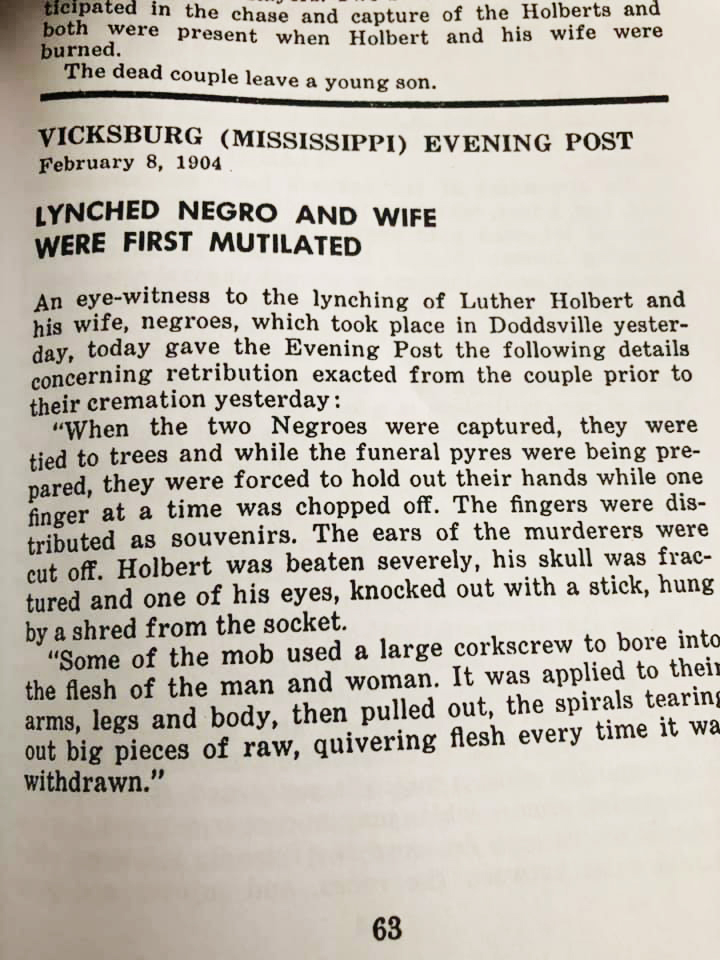 Part of the concern over Pickering’s nomination was his history on racial issues. Opponents accused him of lying under oath about his connection to Mississippi’s infamous Sovereignty Commission, which writer Willie Morris referred to as “a sort of boondocks Gestapo.” Supporters–including a local leader of the National Assn. for the Advancement of Colored People–pointed to Pickering’s testimony against the Ku Klux Klan in a murder trial, which cost him reelection as a prosecutor. These were legitimate questions that deserved a full hearing, which is why the Constitution gives the Senate the power to approve judicial nominations.

I would be the last person to say a racist can’t be rehabilitated. When my grade school was integrated in 1970, I was one of the most racist 12-year-olds you could imagine. I made it clear to my black classmates that they were unwelcome and inferior. Fortunately, they didn’t listen.

Much was made in the press of Pickering’s role on the board of the Institute for Racial Reconciliation at the University of Mississippi, my alma mater. An essential part of racial reconciliation is coming to terms with the brutality of slavery and the state-sponsored terrorism inflicted on African Americans for at least a century afterward. This does not mean we should live in the past, but we can’t whitewash it either. Pickering should be the first to admit that he was in no way “lynched.” It’s important to remember what a real lynching is.