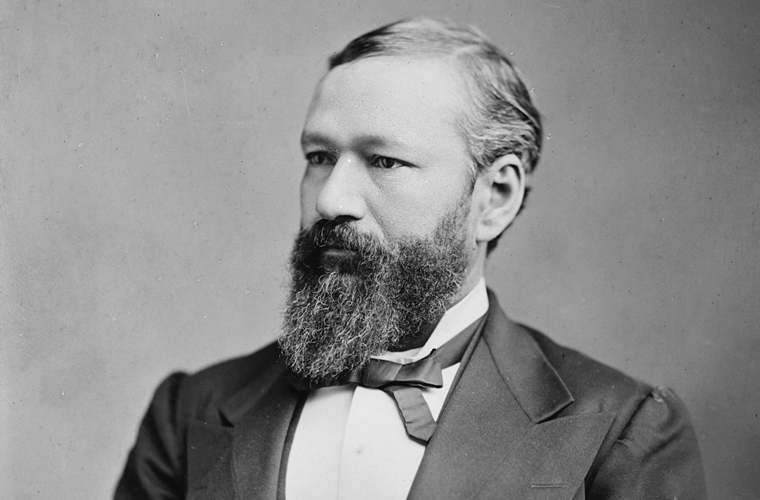 Pinckney Pinchback is best known as the first person of African-American descent to become governor of a U.S. state. Born in Macon, Georgia, on May 10, 1837, the son of a former slave, Pinckney Pinchback fought in the Civil War as a captain in the Union Army. He was the first African American to serve as a U.S. state governor, from 1872 to 1873 in Louisiana. He was later elected to the U.S. Senate but his seat was refused due to reelection fueled by racial tensions. He died in Washington, D.C., on December 21, 1921.

Pinckney Benton Stewart Pinchback was born in Macon, Georgia, on May 10, 1837. His father was a white Mississippi planter, and his mother was a former black slave who was freed before his birth. After Pinchback’s father died in 1848, he, his mother and his nine siblings moved to Ohio to avoid the possibility of being forced back into slavery. When Pinchback was only 12 years old, he began supporting his family by working as a cabin boy, and in time, he became a ship steward on Mississippi River steamboats. At the age of 23, Pinchback married Nina Hawthorne. The couple would go on to have four children together.

When the Civil War broke out in 1861, Pinchback joined the First Louisiana Volunteers, an all-white group. However, he eventually left the group to organize a volunteer unit of black men called the Corps d’Afrique. Pinchback later joined the Second Louisiana Native Guard and served as a captain, but resigned in 1863 because of its racially discriminatory practices. After the war, Pinchback relocated to New Orleans, where he entered politics as a Republican. He served as a delegate in the state’s constitutional convention in 1868 and helped to establish Louisiana’s new constitution. Later that same year, Pinchback was elected as a state senator. In 1871, when lieutenant governor Oscar Dunn died, Pinchback, as president of the Senate, stepped into his role. He served as governor for 36 days from December 9, 1872, to January 13, 1873, while the elected official, Henry C. Warmoth, underwent impeachment proceedings. This service made him the first African-American to serve as a U.S. state governor. During his brief tenure, he sanctioned 10 legislative bills.

P Pinchback was elected to Congress in 1873. However, his opponent William Pitt Kellogg contested the election and won the seat. This reversal was due to the Ku Klux Klan’s intimidation of black voters, as well as corruption on the part of white politicians. A year later, Pinchback won a seat in the U.S. Senate, only to have it denied him as the result of racially motivated actions that reflected tensions prevalent throughout Louisiana. In 1879, Pinchback again served the state constitutional convention, and his legislation helped to found Southern University, where he would later serve on the institution’s board of trustees. The New Orleans Creole community protested the founding of the black university, however, and the ensuing controversy added to Pinchback’s already growing disillusionment with politics. In 1882, Pinchback was appointed as surveyor of customs for New Orleans’s port and held the post for the next three years. When he was 50 years old, however, he decided to study law and enrolled in Straight College. After passing the bar, Pinchback moved his family to New York City and became a federal marshal. Later, they relocated to Washington, D.C., where Pinchback struck up a friendship with Booker T. Washington.

Pinchback died on December 21, 1921, and was buried in New Orleans. One of his grandchildren, Jean Toomer, became a renowned author and poet of the Harlem Renaissance.