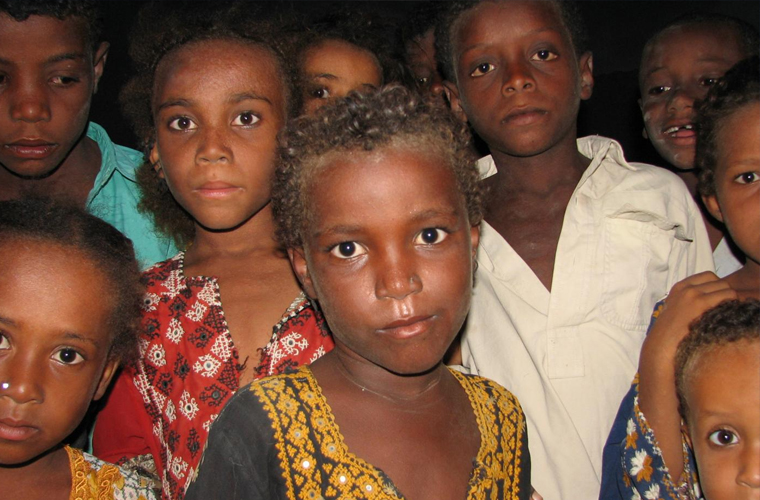 With shards of ancient pottery recovered from the mountains of Iran’s Sistan and Baluchistan province, colorful vases from Isfahan, and tribal masks from Zanzibar adorning the shelves, it is easy to see why.

Mirzai has spent nearly 20 years studying the origins of the African diaspora in Iran, including the history and eventual abolition of slavery in her native country. It was a topic that few knew about in the late 1990s when she began her research and one that remains unfamiliar to many today.

“Living in Iran for all my life, we had never heard about slavery in Iran,” Mirzai told Middle East Eye from Brock University, where she now works as an associate professor of Middle Eastern history.

“I didn’t know whether we had slavery because this is not a common topic or something that people know or discuss,” Mirzai said. After contacting former professors in Iran, Mirzai discovered that Iran did indeed have a history of African slavery – and Iranian archives had the documents to prove it.

“Slavery wasn’t integrated into the history of Iran… In terms of the knowledge of people, common people or even academics, [it] was very, very limited or at that time, [it] was zero,” she said. “There were no written articles or books; it was so new.”

Trade between modern-day Iran and African countries goes back several hundred years. But slavery in Iran spanned two major periods, Mirzai discovered: the Qajar dynasty (1795-1925) and the early years of the Pahlavi dynasty (1925-1979).

Mirzai, whose research focuses primarily on the modern period of slavery in Iran, explained that Gulf-Arab traders – dominated by the Sultanate of Oman, which controlled vast regions bordering the Indian Ocean – brought slaves to Iran from northern and northeastern parts of the African continent, including Tanzania (Zanzibar), Kenya, Ethiopia, and Somalia.

In ancient Islamic literature, Ethiopians were referred to as al-Habasha. Mirzai said that as a result, many slaves took the last name “Habashi” when they came to Iran, to indicate their Ethiopian origins. Slaves from Zanzibar, meanwhile, might take the last name Zanzibari, she said.

Largely concentrated on the southern coast of Iran, slaves worked predominantly in fishing and agriculture, or as domestic servants, wet nurses, or even soldiers in the military.

Africans were also not the only ones to be enslaved in Iran. “In Iran, slavery was not based on race and didn’t focus only on Africans; Circassians and Georgians were also enslaved, and many Iranians were enslaved,” Mirzai said. Some slaves also worked alongside Iranian peasants, who were living in a state of extreme poverty, she added. The abolition of slavery began in 1828 with the end of trading Circassians and Georgians, and culminated with the outlawing of the practice altogether exactly a century later, Mirzai found.

The idea to investigate African slavery in Iran and the Middle East more generally was born out of the Nigerian Hinterland Project (NHP), a research project funded by the Canadian government that focused on the displacement of people in Nigeria and neighboring countries through slavery, Lovejoy explained.

The NHP was based on UNESCO’s Slave Route initiative, which was launched in 1994 to better understand the causes and impact of global slavery. “She set out to do something that was quite unusual,” said Lovejoy, who supervised Mirzai’s Ph.D. thesis and currently holds the Canada Research Chair in African Diaspora History.

He said that little was known about slavery in the Arab and Muslim world when Mirzai began her research. Today, the work continues at York University through the Harriet Tubman Institute for Research on Africa and its diasporas.

“There are many people who either don’t even know there was slavery in the Muslim world, or they think it was so different from the Americas that it doesn’t qualify. Or, more [commonly], it’s a subject with so much taboo associated with it that no one wants to talk about it,” Lovejoy told Middle East Eye.

He said researching the history of slavery around the world is crucial because it can foster greater understanding in the present.

“People don’t like to remember the bad things about the past. In many ways, that’s very understandable. But on the other hand, when racism continues and continues and continues, we’ve got to come to terms with it and stop it. And the only way we can stop it is by not ignoring the past, but understanding why the past happened and why there’s no reason to continue certain stereotypes and myths,” he said.

“We have to persist in telling the truth, even when the truth sometimes isn’t pleasant, and Behnaz is part of that. She’s brave.”

Today, about 10 to 15 percent of the population in southern Iran can be described as being the descendants of Africans, Mirzai estimated, and that percentage decreases the further north you go.

Many members of the Afro-Iranian community, a term Mirzai coined in her research, do not even know their own history or family’s origins. “They have no knowledge of their past. The history is lost,” Mirzai said.

Mirzai said Afro-Iranians are often referred to as the “blacks of the South” and many Iranians still believe that their dark skin is the result of the oppressive heat on the southern coast. “People link it to the climate. People think that they are dark because it is very, very hot in the southern part of Iran,” she said.

The history of African communities in other Gulf countries also remains largely unknown, said John Thabiti Willis, a professor of African history at Carleton College in the US who has studied African involvement in pearl diving in the United Arab Emirates.

‘People link it to the climate. People think that they are dark because it is very, very hot in the southern part of Iran’ – Behnaz Mirzai, academic

Willis was drawn to the topic when he noticed a black pearl diver in a photograph at the Dubai museum. “I was struck because looking throughout the museum there were next to no representations of black people,” Willis told Middle East Eye.

After researching the topic, he discovered that the Gulf relied on African laborers – many of whom were brought over as slaves from East Africa – to meet the world’s demand for pearls.

“Many mission documents from British agents in Muscat, Sharjah, and Bahrain suggest that many people who were doing this in the early 20th Century were enslaved,” he said.

“In a number of these Middle Eastern countries and the Gulf countries, the stigma of slave ancestry is something that people are more invested in hiding than they are in acknowledging.”

Willis said it’s not his job as an outsider to force Gulf societies to confront their own histories of slavery. But he said that he hopes people will take a self-reflective view on the past and the factors which shaped it, including religious interpretations.

“I think it’s increasingly going to be something that people have to wrestle with,” he said. “For me, going into the past and grappling with the ways in which the past still haunts us, or the way in which we aren’t really free from the past, I think is quite essential.”

Mirzai said that Afro-Iranians view themselves as Iranians and are sometimes upset by questions about their African origins.

“I have asked them previously, what do you think you are? And they say, ‘We are Iranians’. If there is any question relating them to Africans, they take it as an insult… [as if] that means you’re trying to say [they] are not Iranians.”

In a film Mirzai produced, Afro-Iranian Lives, an Afro-Iranian man named Mohamad Durzadeh said his family had been living on the land since the time of his grandfather. “They were here,” he said, when asked where his ancestors originally came from, reflecting a lack of knowledge of his origins.

Another man in the film, who did not give his name, explained that there are distinctions between Afro-Iranian families. “The Durzadehs view themselves as superior to the Ghulam and the Nukar communities. They believe that Ghulams were slaves, but the Durzadehs were free,” he said.

A lack of familiarity with Afro-Iranians may cause Iranians from other parts of the country to question where the community comes from, or view them as outsiders. But Mirzai said that while it is uncommon, she has documented some inter-marriage between Afro-Iranians and Iranians.

University of Pennsylvania Ph.D. student Beeta Baghoolizadeh writes that Afro-Iranians assimilated with varying levels of success based on where they settled. “For example, Afro-Iranian communities in the Sistan-Baluchestan province function separately from the rest of society and perpetuate a rigid caste system within their community that offers little opportunities for social mobility.”

The Afro-Iranian community today blends African traditions with Iranian culture, she said, including partaking in an exorcism ritual is known as Zar, which is believed to cleanse the body of evil spirits. It is still practiced today in Tanzania and Ethiopia.

“For me, what was important wasn’t to tell them that you are not Iranian, or you are strangers. Most of them have been integrated; they are Iranian,” she said.