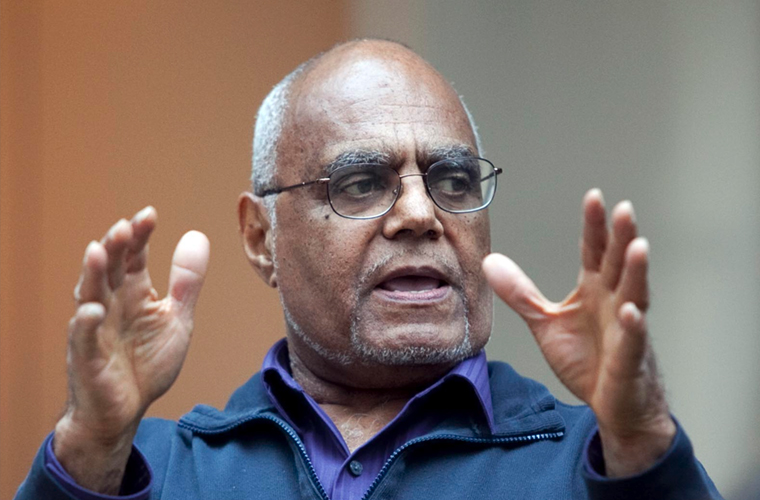 Although he avoided publicity and was reluctant to assert himself as a leader, Robert Parris Moses became one of the most influential black leaders of the southern civil rights struggle. His vision of grassroots, community-based leadership differed from Martin Luther King’s charismatic leadership style. Nonetheless, King appreciated Moses’ fresh ideas, calling his “contribution to the freedom struggle in America” an “inspiration” (King, 21 December 1963).

Born on 23 January 1935 in New York City, Moses grew up in a housing project in Harlem. He attended Stuyvesant High School, an elite public school, and won a scholarship to Hamilton College in Clinton, New York. He earned a master’s degree in philosophy in 1957 from Harvard University and was working toward his doctorate when he was forced to leave because of the death of his mother and the hospitalization of his father. Moses returned to New York and became a mathematics teacher at Horace Mann School.

During the late 1950s, Moses became increasingly interested in the civil rights struggle. In 1959 he helped Bayard Rustin with the second Youth March for Integrated Schools in Washington, D.C. Although he was willing to stuff envelopes along with other office volunteers, Rustin encouraged him to do more, suggesting in 1960 that he use his summer teaching break to go to Atlanta and work with King and the Southern Christian Leadership Conference (SCLC). In Atlanta, Moses volunteered to travel on behalf of the Student Nonviolent Coordinating Committee (SNCC)—then a nascent student organization sharing offices with SCLC—on a recruiting tour of Louisiana, Alabama, and Mississippi, where he met local National Association for the Advancement of Colored People activist Amzie Moore. At Moore’s request, Moses returned to Mississippi in 1961 to work on voter registration. Initially just a volunteer, Moses quickly joined SNCC’s staff of three as the special field secretary for voter registration based in McComb, Mississippi. The following year he was named the co-director of the Council of Federated Organizations (COFO), a cooperative of civil rights groups in the state.

As an organizer, Moses nurtured local leaders who could continue the struggle after organizers had departed. He recognized the untapped potential of grassroots activists such as Fannie Lou Hamer who, despite only a sixth-grade education, became one of SNCC’s most effective organizers. “Leadership is there in the people,” he later said. “You don’t have to worry about where your leaders are, how are we going to get some leaders. The leadership is there. If you go out and work with your people, then the leadership will emerge” (Carson, 303).

Moses developed the idea for the 1964 Mississippi Freedom Summer Project, which recruited northern college students to join Mississippi blacks conducting a grassroots voter registration drive. When local blacks were excluded from participating in the all-white “regular” Democratic Party, Moses suggested creating the Mississippi Freedom Democratic Party (MFDP), which sought recognition as the representative delegation from Mississippi at the Democratic National Convention of 1964. Moses, King, and MFDP delegates participated in negotiations with vice presidential hopeful Hubert Humphrey. Although King favored a compromise whereby MFDP would be given two at-large seats, Moses and most MFDP delegates held out for full recognition.

Moses resigned from COFO in late 1964. He later commented that his role had become “too strong, too central, so that people who did not need to, began to lean on me, to use me as a crutch” (Carson, 156). He temporarily dropped his surname, going by his middle name, Parris, and began participating in the campaign against the Vietnam War. Speaking at the first massive anti-war demonstration on 17 April 1965 at the Washington Monument, Moses linked his opposition to the war to the civil rights struggle. As his involvement in the anti-war movement increased, he took a leave of absence from SNCC to avoid criticisms from fellow members who did not support his stance. Following his trip to Africa in 1965 Moses came to believe that blacks must work independently of whites, and by 1966 Moses had cut off all relationships with whites, even former SNCC activists.

Then separated from his first wife, SNCC worker Dona Richards, Moses moved to Canada to avoid the military draft in 1967. He later remarried and settled in Tanzania, where he and his wife Janet lived for several years before returning to the United States. While Moses was completing his Ph.D. at Harvard, he was awarded a MacArthur Foundation “Genius” award, which he used to promote the Algebra Project, a national program to improve the math literacy skills of children in poor communities.