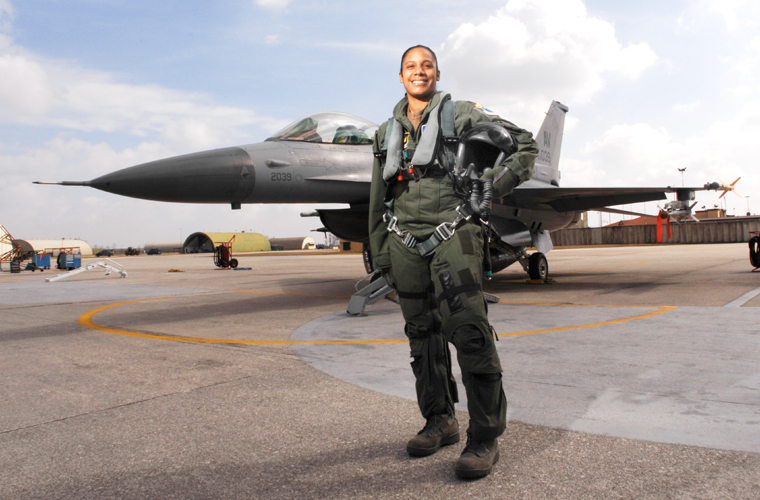 “You have only one chance in this life so dream big, be true to yourself and don’t let anything stand in your way.”

Shawna Rochelle Kimbrell is a major in the United States Air Force, and the first African-American and female US Air Force fighter pilot.

Kimbrell was born in Lafayette, Indiana on April 20, 1976, to Guyanese parents that came to the United States to pursue education and greater opportunity. Her father excelled at Howard University and later earned a doctorate at Purdue University. That same drive was instilled into Kimbrell and her three older siblings. By the time she was in fourth grade, young Kimbrell knew she wanted to be amongst the world’s most elite fighters initially considering becoming an astronaut, but then concluding that a fighter jet would be more her speed. She joined the Civil Air Patrol, worked at air shows, and earned her private pilot’s license. Eventually, she was accepted into the Air Force Academy. After graduating from the Air Force Academy in 1998, Kimbrell went on to complete intense pilot training receiving her pilot wings in August 1999 at Laughlin Air Force Base in Texas. Kimbrell then completed the Fighter Fundamental combat training program and graduated from F-16 training at Luke Air Force Base in Arizona.

“I was in constant competition with myself, trying to do better, to make the grade. There were times when I didn’t think that I was going to make it through. It was in those times I learned to be humble and realize there is a point in everyone’s struggle — no matter how strong they are — when they need help, and the key is to seek it out before it is too late.”

Her first operational assignment was in Misawa, Japan; becoming the first woman to fly for the Misawa Air Base’s 35th Fighter Wing. In 2001, she broke the color and gender barrier in the Air Force by serving as a combat pilot for Operation Northern and Southern Watch in Turkey and Saudi Arabia. While serving in the 8th Operations Support Squadron in Korea, she flew with the 80th Fighter Squadron, Juvats. Kimbrell also served for three years as the A-Flight Commander, 1st Brigade Air Liaison Officer, and as 2nd Brigade Air Liaison Officer in support of Operation Iraqi Freedom.

“Nothing’s easy. Expect roadblocks, expect that there are going to be people out there who don’t want you to succeed, expect people are going to tell you no. But the desire that comes from within — if it’s something that you really want — will carry you through.” –

The list of aircraft Kimbrell has flown includes the F-16, T-38, T-37, and T-3. She has more than 1,110 hours in the F-16, including 176 hours of combat time. Obtaining such status took a combination of desire, training, foresight, and the support of her parents.

Kimbrell who is married and has two young children is currently based in Las Vegas as a course manager and instructor for the Air Liaison Officer Qualification Course. She teaches pilots how to work with the Army in air-to-ground integration. While off duty, though, she manages to find time to speak to children about dreaming big. Kimbrell said she finds that a lot of children aren’t told that they can achieve their dreams and don’t realize that a lot of barriers have been knocked down.

“I literally see the lights turn on in kids’ eyes when I talk to them when they realize that someone like me can go do something as cool as (being a fighter pilot). It’s really awesome to be able to go out and talk to them and have them light up and say, ‘I’ve heard people say that you can do whatever you want, but now I can’t put a face to the story and I can see that it can be done, which means I can go out and do whatever I want to do.’ That is what I focus on and what I think is really important.” 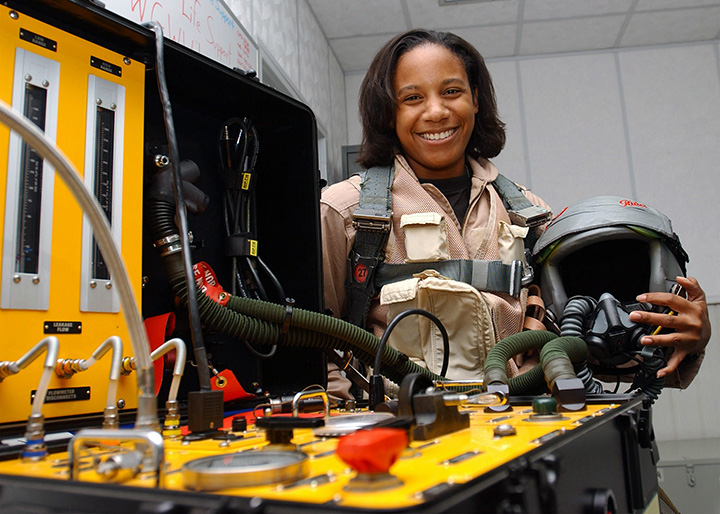