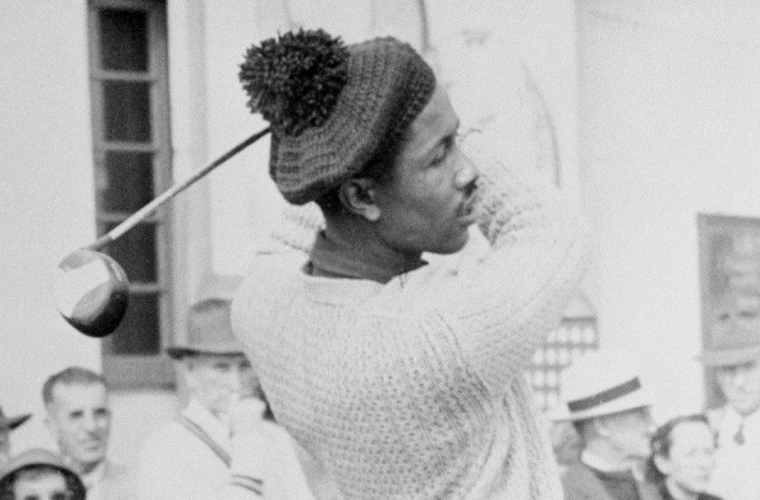 Ted Rhodes, recognized as the first African American professional golfer, grew up in Nashville. Immediately after becoming the first person of color to win the prestigious Masters Tournament in 1997, Tiger Woods told a national television audience: “I am the first minority to win here, but I wasn’t the first to play. That was Lee Elder, and my hat’s off to him and Charlie Sifford and Ted Rhodes, who made this possible for me.” Rhodes was more than a pioneer in the game; he also was a teacher and an inspiration to many. “Whatever has happened to me in big-time golf, and whatever success I attain eventually, I owe to Ted Rhodes,” remarked Lee Elder a day after Rhodes’s death on July 4, 1969. “He took me under his wing when I was sixteen years old and completely rebuilt my golf game and my life. His encouragement and assistance enabled me to develop a game strong enough to compete on the PGA Professional Golf Association tour.”

Ted Rhodes rose from humble beginnings. As a teenager, he worked as a caddy at Nashville’s Belle Meade Country Club, a club where African Americans like Rhodes were not allowed to play golf or even belong as a member. But Rhodes, nicknamed “Rags” because of his neat and flashy dress style, picked up the game of caddying. He would slip in and play whenever he got a chance on the golf course. He also practiced the game as a teenager with other caddies at the old Sunset Park, a baseball field in Nolensville in Williamson County.

After serving in the U.S. Navy during World War II, Rhodes was discharged in Chicago. There, he became friends with entertainer Billy Eckstine and boxing champions Sugar Ray Robinson and Joe Louis. Louis would eventually sponsor Rhodes in various tournaments such as the Canadian Open and the Los Angeles Open. Rhodes, meanwhile, taught Louis the game of golf and served as his valet. He also traveled with Charlie Sifford, who followed Rhodes as one of the first African American members of the PGA.

In his adulthood, Rhodes weighed about two hundred pounds and had broad shoulders. He was a good dancer, which provided rhythm and good balance for his golf game. John Bibb, a retired sports editor of the Nashville Tennessean, remembered Rhodes as a great player, the equal of his white contemporaries, who, if given the chance, would have competed well on the professional tour. But Rhodes rarely had an opportunity to show his talent in Nashville because Jim Crow laws kept him off the city’s various municipal courses.

After traveling around the nation most of his adult life, Rhodes moved back to Nashville in the late 1960s. He died while living at the El Dorado Motel in Nashville on July 4, 1969. On March 8, 1970, thirty-two people attended a Nashville meeting to form the Ted Rhodes National Memorial Foundation. The foundation, a charitable nonprofit organization, was organized to promote the game of golf and to encourage and assist qualified young men and women who exemplify a talent for it. William Hailey, former director of the Ted Rhodes Golf Tournament, established after Rhodes’s death, recalled that Rhodes was a gentleman, a flawless player, and a man with a good sense of humor.

Today, in Nashville near the intersection of Ed Temple Boulevard and Clarksville Highway, there is an eighteen-hole municipal golf course named in honor of Ted Rhodes. In his later years of life, Rhodes played on a nine-hole course at the site.