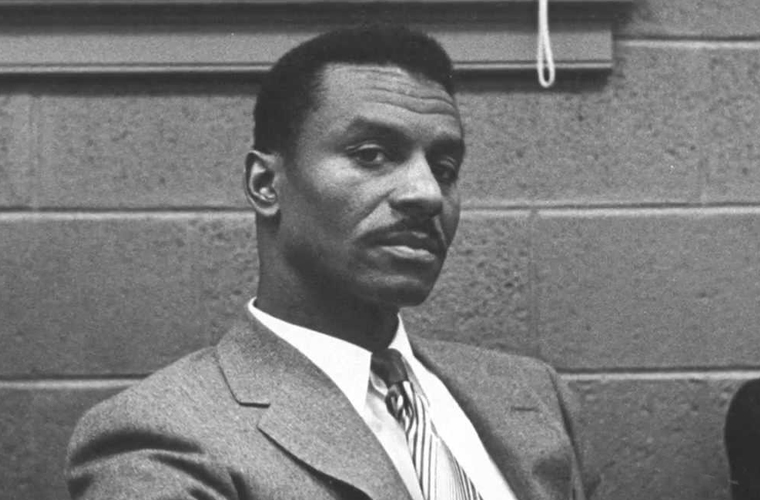 Fred Shuttlesworth was a Baptist minister and one of the South’s most prominent Civil Rights leaders. He worked closely with Dr. Martin Luther King Jr., co-founding the SCLC and organizing direct-action protests in Birmingham, refusing to waver even after multiple attacks. Also a community activist in Cincinnati, he died on October 5, 2011.

Freddie Lee Robinson was born in Mount Meigs, Alabama, on March 18, 1922. Born to a large clan that eventually moved to Birmingham when he was a toddler, Robinson took the surname Shuttlesworth from his stepfather, William, who had married his mother Alberta and worked as a farmer and coal miner. Graduating valedictorian from his high school, Fred Shuttlesworth worked assorted jobs before finding his calling to the pulpit, studying at the ministerial institution Selma University and earning his B.A. in 1951, later earning his B.S. from Alabama State College.

Shuttlesworth became pastor of Birmingham’s Bethel Baptist Church in 1953. After the Brown v. Board of Education ruling, he was further inspired to actively participate in the growing Civil Rights Movement. He called for the hiring of African-American police officers and, with the outlawing of the NAACP in his home state, Shuttlesworth established the Alabama Christian Movement for Human Rights in 1956. He also co-founded the Southern Christian Leadership Conference with other leaders, including Martin Luther King Jr. and Bayard Rustin. Shuttlesworth, with King and fellow minister Ralph D. Abernathy, would later be seen as one of the movement’s “Big Three.”

After the desegregation of Montgomery busses due to the citywide boycott inspired by Rosa Parks, Shuttlesworth was organizing efforts in his city to implement bus desegregation as well when his residence was bombed on Christmas, with the pastor inside. He nonetheless steadfastly proceeded with plans; later, when he and his wife took their daughter to integrate into a white school, the couple was brutally attacked by a Ku Klux Klan mob.

Shuttlesworth held fast to his firm belief in direct action and was a key leader throughout the history of the movement, though he had relocated to Cincinnati in the early 1960s and hence routinely traveled back to the South. After May 14, 1961, attacks on the Freedom Riders, Shuttlesworth provided refuge for the activists, with outreach made to Attorney General Robert Kennedy for assistance. He also convinced Dr. King to have Birmingham become a focal point of the movement and organized well-documented youth-driven marches and protests, in which he was badly hurt at one point in 1963. And Shuttlesworth was an organizer of the 1965 Selma to Montgomery voting rights march. Shuttlesworth was arrested many, many times over the course of his activism, yet in later interviews would talk about the power of his faith in sustaining him.

Later Years
Shuttlesworth later established the Greater New Light Baptist Church in the middle of the 1960s in Cincinnati. Fast forward to the 1980s, and he founded another organization, the Shuttlesworth Housing Foundation, providing grants for home ownership.

In the new millennium, Shuttlesworth received the Presidential Citizens Medal from Bill Clinton in 2001, with the Birmingham-Shuttlesworth International Airport named in his honor in 2008. Shuttlesworth also became president of the SCLC mid-decade, though he soon left due to disagreements with the internal workings of the organization.

In 2007, Fred Shuttlesworth moved back to Birmingham, where died on October 5, 2011, at 89 years old. The minister at one point had thought he wouldn’t live to see 40, dwelling in the Deep South during the tumult. He was survived by Sephira Bailey, his second wife, and a large family. An award-winning 1999 biography on Shuttlesworth—A Fire You Can’t Put Out—was penned by Andrew M. Manis.