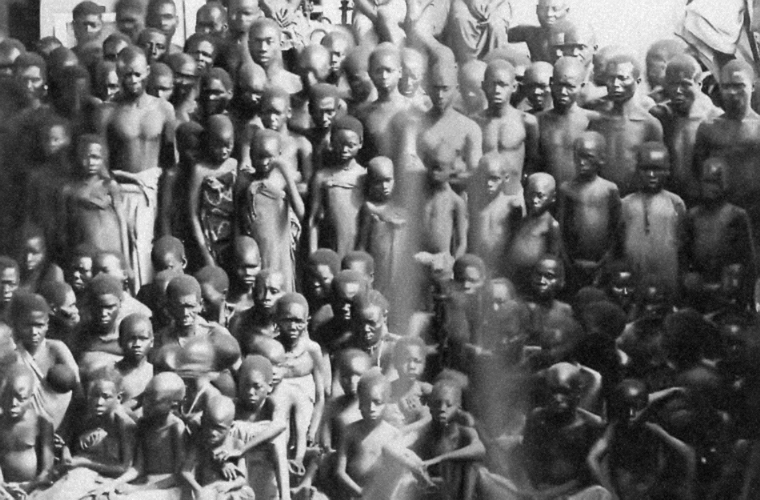 The harrowing experiences of the African man during the era of slavery still remain an open book in our history as people. A lot has been accounted for. But many more remain untold or forgotten.

The American slave trade seems to have the most popular of accounts. And that might be because the slavers, historians, scholars, and the slaves themselves spoke English and understood the English language. And that made it easier for multiple narratives to be found.

Today you easily hear the horrific accounts of European and American slavery from the mouths of a common African or African-America. But the reverse is the case for the Arab slave trade and era. Very little or nothing is known by a majority of English and French-speaking Africans.

The Arab slave trade involved some of the most atrocious and dreadful atrocities committed against Africans. It is said that it was more dehumanizing and Brutal than the Atlantic slave trade.

The Arab slave trade began in the 7th century, around the year 633. This was the year after the death of Prophet Muhammad. Then the armies of Islam conquered a large portion of what is today Syria, Egypt, Palestine, Iran, Iraq, Turkey, and the North African coast. The Qur’an (Koran) was codified in 650, and Muslims took it as the direct words of God (Allah). The Koran forbade the taking of slaves from fellow Muslims but did not forbid them from taking non-believers and those who opposed their religion.

The practice of slavery in Africa, as a business venture, started in Darfur in the year 652. There was a peace agreement between the Arab invaders and the Sudanese leader. So, to meet up with his own end of the treaty, the leader provided the Arab invader’s several hundreds of African slaves every year. This supply of slaves continued for centuries. The slaves were sent along the Red Sea route up until the 18th century, which was the peak of the Arab slave trade.

The historian Paul Lovejoy in his accounts, estimates that about 9.85 million Africans were shipped out as slaves to Arabia, and in small numbers, to the Indian subcontinent. He broke the figure down as follows:

We at Liberty writers believe that there can never be an accurate account of these numbers. What matters here is telling the stories and teaching our people their route throughout human existence.

Lovejoy wrote that another 4.1 million Africans were shipped across the Red Sea to the Persian Gulf and India, by Arab slavers.

The Omani Arab rulers of Zanzibar, throughout the 19th century, shipped hundreds of thousands of African slaves to labor on clove plantations on the Island. After the abolishment of European and American slavery, this slavery at Zanzibar was so horrific that Europe and American authorities started to highlight the wickedness of the Arab slavers, who continued their enslavement of Africans farther into the first decade of the 20th century.

It has been reported that even today, Arab slavers are still buying and selling slaves in Sudan and Mauritania. This is a slap to humanity and African leaders.

The African slaves were said to have suffered terrific horrors in the hands of the Arabs. The men were castrated and the women were converted to sex slaves. Even when the women got pregnant for their slave masters and give birth, their children were killed. This is to snuff out any chance of a semblance of the African in their community. What vile wickedness?

A British missionary and explorer named David Livingstone was upset by the manner the Arabs treated the African slaves, that he wrote back home in 1870 and had this to say:

“In less than I take to talk about it, these unfortunate creatures – 84 of them, wended their way into the village where we were. Some of them, the eldest, were women from 20 to 22 years of age, and there were youths from 18 to 19, but the large majority was made up of boys and girls from 7 years to 14 or 15 years of age.

“A more terrible scene that these men, women and children, I do not think I ever came across. To say that they were emaciated would not give you an idea of what human beings can undergo under certain circumstances. “Each of them had his neck in a large forked stick, weighing from 30 to 40 pounds, and five or six feet long, cut with a fork at the end of it where the branches of a tree spread out. “The women were tethered with bark thongs, which are, of all things, the cruelest to be tied with. Of course, they are soft and supple when first stripped off the trees, but a few hours in the sun make them about as hard as iron round packing cases. The little children were fastened by thongs to their mothers.

“As we passed along the path which these slaves had traveled, I was shown a spot in the bushes where a poor woman the day before, unable to keep on the march, and likely to hinder it, was cut down by the axe of one of the slave drivers. “We went on further and were shown a place where a child lay. It had been recently born, and its mother was unable to carry it from debility and exhaustion; so, the slave trader had taken this little infant by its feet and dashed its brains out against one of the trees and thrown it in there.”

This was the kind of brutality that Africans experienced at the hands of the Arabs. It seemed like the entire world was pitched against Africans. Each man taking his pound of flesh from a race that did them no harm.

The pain of them all, was the trek across the Sahara Desert, in leg and neck chains. One can imagine the distance the slaves would have to travel on foot, under the devilish weather conditions of the Sahara, with little or no water for hours/days.

Duncan Clarke said that “the hardships of these long marches across the desert were considerable, and much later travelers reported that the routes were lined with the parched skeletons of those who succumbed to exhaustion and thirst along the way.”

The Arab slavers and the Arab world preferred African women and girls. Millions of young girls and women were forcefully shipped across to Sahara and the Horn of Africa, to become Islamic concubines. This practice of subduing women and high sexual brutality among the Arabs have not stopped till today.

The Arab men found more pleasure in using these female slaves as concubines and kept them in harems. Unfortunately, their male counterparts were castrated and turned into eunuchs who secured the harems. It would interest the reader to know that castration was an unavoidably brutal process, and the survival rate was only 10%.

Arab slavery in Africa, just like the Atlantic slave trade had so many negative effects on the African people. Its effects were felt in our economy, politics, demographics, cultural, social, and religious life. It is safe to say that there is no combination of disasters that reached the scope of wickedness meted out on Africans by Arab slavers.

Arab Slavery checked the population growth in Africa and consequentially placed unimaginable pressure upon gender and marital relationships. The ratio of women to men slaves that were taken was three-to-one. This resulted in the application of extreme measures by the men and women who were left back home in Africa. The practices included early childbirth among young girls so that more women would be born.

When slavery in the Black Sea area dried up, it triggered even greater demand for Ethiopian “red” slaves, in particular, the Galla and Oromo, on account of their unquestioned beauty and willing sexual temperament.

In the Arab world, there was a vicious plot to dilute the African race who were slaves in Arabia. So, miscegenation was the process deployed. The women got pregnant for their Arab masters and gave birth to mixed children. These children would also grow up to be married to Arabs. This, after a few centuries, completely left few visible traces of the millions of slaves shipped from Africa to the Arab world.

Today, there are no large concentrations of African slaves sent to Arabia/the Orient, anywhere in the Middle East or Asia. Unlike the descendants of slaves in America, who have a large population and communities, those of the Arab world have disappeared. This was an intentional means to deter any form of integration or equality between the descendants of Africans in Arabia. More pragmatic and wicked was the castration of the men, so they could not mate and reproduce with their African women.

These harrowing accounts remain a big stain in our past as Africans, and till today contributes to how we are perceived by the Arab world. As we speak, there are still accounts of modern-day slavery of Africans in North America and the Arab world. They have not seized.

You can watch this documentary to hear similar accounts of the Arab slave trade in Africa: