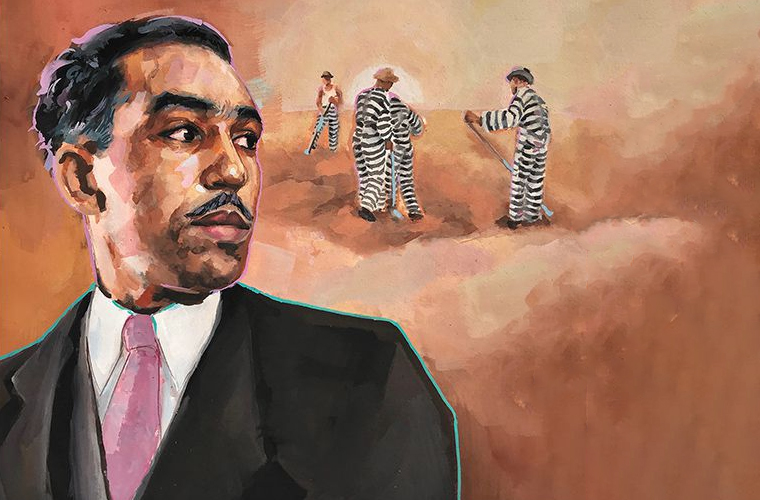 In 1933, the Harlem Renaissance star wrote a powerful essay about race. It has never been published in English—until now

It’s not every day that you come across an extraordinary unknown work by one of the nation’s greatest writers. But buried in an unrelated archive I recently discovered a searing essay condemning racism in America by Langston Hughes—the moving account, published in its original form here for the first time, of an escaped prisoner he met while traveling with Zora Neale Hurston.

In the summer of 1927, Hughes lit out for the American South to learn more about the region that loomed large in his literary imagination. After giving a poetry reading at Fisk University in Nashville, Hughes journeyed by train through Louisiana and Mississippi before disembarking in Mobile, Alabama. There, to his surprise, he ran into Hurston, his friend, and fellow author. Described by Yuval Taylor in his new book Zora and Langston as “one of the more fortuitous meetings in American literary history,” the encounter brought together two leading lights of the Harlem Renaissance. On the spot, the pair decided to drive back to New York City together in Hurston’s small Nash coupe.

The terrain along the back roads of the rural South was new to Hughes, who grew up in the Midwest; by contrast, Hurston’s Southern roots and training as a folklorist made her a knowledgeable guide. In his journal, Hughes described the black people they met in their travels: educators, sharecropping families, blues singers, and conjurers. Hughes also mentioned the chain gang prisoners forced to build the roads they traveled on.

Hughes traveled by train (and a small freighter to Cuba) until he reached Mobile, where Hurston was conducting her first interviews with Cudjo Lewis, a formerly enslaved man whose life she would detail in Barracoon. From Alabama, Hurston drove them through the South. (Eritrea Dorcely)

Three years later, Hughes gave the poor, young, and mostly black men of the chain gangs a voice in his satirical poem “Road Workers”—but we now know that the images of these men in gray-and-black-striped uniforms continued to linger in the mind of the writer. In this newly discovered manuscript, Hughes revisited the route he traveled with Hurston, telling the story of their encounter with one young man picked up for fighting and sentenced to hard labor on the chain gang.

I first stumbled upon this Hughes essay in the papers of John L. Spivak, a white investigative journalist in the 1920s and 1930s, at the Harry Ransom Center at the University of Texas at Austin. Not even Hughes’ authoritative biographer Arnold Rampersad could identify the manuscript. Eventually, I learned that Hughes had written it as an introduction to a novel Spivak published in 1932, Georgia Nigger. The book was a blistering exposé of the atrocious conditions that African-Americans suffered on chain gangs, and Spivak gave it a deliberately provocative title to reflect the brutality he saw. Scholars today consider the forced labor system a form of slavery by another name. On the final page of the manuscript (not reproduced here), Hughes wrote that by “blazing the way to truth,” Spivak had written a volume “of great importance to the Negro peoples.”

Hughes titled these three typewritten pages “Foreword From Life.” And in them, he also laid bare his fears of driving through Jim Crow America. “We knew that it was dangerous for Northern Negroes to appear too interested in the affairs of the rural South,” he wrote. (Hurston packed a chrome-plated pistol for protection during their road trip.)

But a question remained: Why wasn’t Hughes’ essay included in any copy of Spivak’s book I had ever seen? Buried in Spivak’s papers, I found the answer. Hughes’ essay was written a year after the book was published, commissioned to serve as the foreword of the 1933 Soviet edition, and published only in Russian.

In early 1933, Hughes was living in Moscow, where he was heralded as a “revolutionary writer.” He had originally traveled there a year earlier along with 21 other influential African-Americans to participate in a film about American racism. The film had been a bust (no one could agree on the script), but escaping white supremacy in the United States—at least temporarily—was immensely appealing. The Soviet Union, at that time, promoted an ideal of racial equality that Hughes longed for. He also found that he could earn a living entirely from his writing.

For this Russian audience, Hughes reflected on a topic as relevant today as it was in 1933: the injustice of black incarceration. And he captured the story of a man that—like the stories of so many other young black men—would otherwise be lost. We may even know his name: Hughes’ journal mentions one Ed Pinkney, a young escapee whom Hughes and Hurston met near Savannah. We don’t know what happened to him after their interaction. But by telling his story, Hughes forces us to wonder. 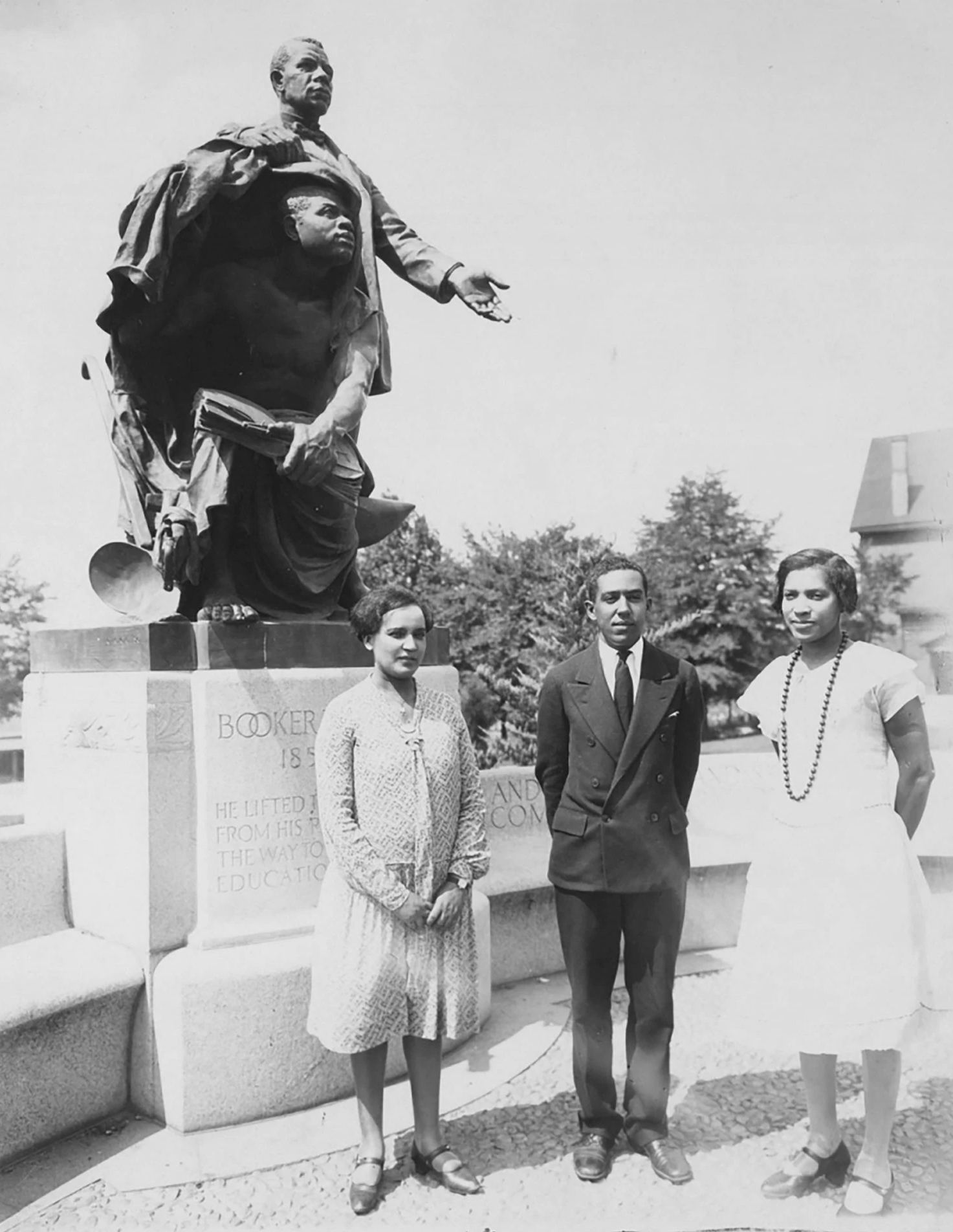 Hughes and Hurston (right) visited Tuskegee University on their trip. They were photographed there with writer Jessie Fauset in front of a statue of Booker T. Washington titled Lifting the Veil of Ignorance. (The Langston Hughes Estate)

I had once a short but memorable experience with a fugitive from a chain gang in this very same Georgia of which [John L.] Spivak writes. I had been lecturing on my poetry at some of the Negro universities of the South and, with a friend, I was driving North again in a small automobile. All-day since sunrise we had been bumping over the hard red clay roads characteristic of the backward sections of the South. We had passed two chain gangs that day, one in the morning grading a country road, and the other about noon, a group of Negroes in gray and black stripped [sic] suits, bending and rising under the hot sun, digging a drainage ditch at the side of the highway. We wanted to stop and talk to the men, but we were afraid. The white guards on horseback glared at us as we slowed down our machine, so we went on. On our automobile, there was a New York license, and we knew it was dangerous for Northern Negroes to appear too interested in the affairs of the rural South. Even peaceable Negro salesmen had been beaten and mobbed by whites who objected to seeing a neatly dressed colored person speaking decent English and driving his own automobile. So we did not stop to talk to the chain gangs as we went by.

But that night a strange thing happened. After sundown, in the evening dusk, as we were nearing the city of Savannah, we noticed a dark figure waving at us frantically from the swamps at the side of the road. We saw that it was a black boy.

“Can I go with you to town?” the boy stuttered. His words were hurried, as though he were frightened, and his eyes glanced nervously up and down the road.

“Get in,” I said. He sat between us on the single seat.

“Do you live in Savannah?” we asked.

“No, sir,” the boy said. “I live in Atlanta.” We noticed that he put his head down nervously when other automobiles passed ours and seemed afraid.

“And where have you been?” we asked apprehensively.

“On the chain gang,” he said simply.

We were startled. “They let you go today?”

“No, sir. I ran away. That’s why I was afraid to walk in the town. I saw you-all was colored and I waved to you. I thought maybe you would help me.” 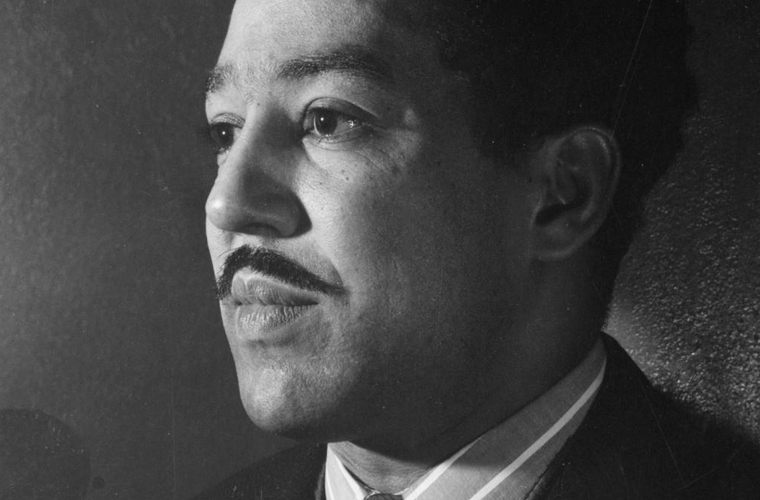 The torture some inmates endured in Georgia in 1931. One man in Muscogee County was chained in a neck iron for two months.

Gradually, before the lights of Savannah came in sight, in answer to our many questions, he told us his story. Picked up for fighting, prison, the chain gang. But not a bad chain gang, he said. They didn’t beat you much in this one. Only once the guard had knocked two teeth out. That was all. But he couldn’t stand it any longer. He wanted to see his wife in Atlanta. He had been married only two weeks when they sent him away, and she needed him. He needed her. So he had made it to the swamp. A colored preacher gave him clothes. Now, for two days, he hadn’t eaten, only running. He had to get to Atlanta.

“But aren’t you afraid,” [w]e asked, “they might arrest you in Atlanta, and send you back to the same gang for running away? Atlanta is still in the state of Georgia. Come up North with us,” we pleaded, “to New York where there are no chain gangs, and Negroes are not treated so badly. Then you’ll be safe.”

He thought a while. When we assured him that he could travel with us, that we would hide him in the back of the car where the baggage was, and that he could work in the North and send for his wife, he agreed slowly to come.

In Savannah, we found a place for him to sleep and gave him half a dollar for food. “We will come for you at dawn,” we said. But when in the morning we passed the house where he had stayed, we were told that he had already gone before daybreak. We did not see him again. Perhaps the desire to go home had been greater than the wish to go North to freedom. Or perhaps he had been afraid to travel with us by daylight. Or suspicious of our offer. Or maybe…

For publication in Russia, the title of Spivak’s book was translated as “Negr iz Dzhordzhii.” Russian doesn’t have an equivalent of the n-word used in the English title. “Negr” is a standard, neutral term that describes someone of African descent. (Hesburgh Libraries of the University of Notre Dame)